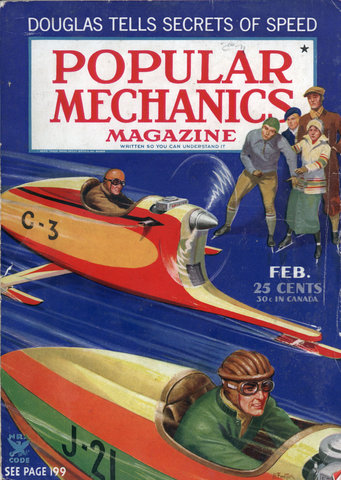 By Frazier Hunt THIS Charles F. Kettering, head of the great experimental laboratories of the General Motors company, is a dispeller of gloom and a true champion of hope. "Why there is ten times more opportunity right now than there was in my day, thirty or forty years ago," "Boss Ket" fairly barked at me. "It's true that young men right now are having trouble finding a job, but that shouldn't keep them from going ahead and learning something. If all a fellow wants out of life is a job, then he doesn't want much, and he won't go very far.
Uncle Sam - Inventor

"EVERY day in Washington, for several months, a government scientist mounted to the roof of one of the federal buildings and devoted an hour or two to rambling about in the broiling sun, peering into glass containers filled with such things as butter, salad oil, lard, potato chips, mayonnaise and other food products. This particular scientist, Mayne R. Coe, of the federal bureau of chemistry and soils, was trying to find out something about rancidity in foods and what could be done about it. In the experiments, now concluded, he used different colored glass containers and flasks. Alongside each of the colored containers he had a check one of clear glass. He had butter in a grass-green container and butter in a clear glass container; lard in red or yellow container and lard in a clear container.
The NEXT WAR in the AIR

By GENERAL WILLIAM MITCHELL Former Commander Air Forces, A.E.F. AIRCRAFT can now be built that will go around the world at the equator on one charge of fuel. Lighter-than-air craft now can be made to carry fifty or sixty tons of useful load besides crew and fuel; they can ascend to 30,000 feet or more, and their radius of action is greater than that of any other known means of transportation. Heavier-than-air craft now can be made to go from 6,000 to 8,000 miles, carrying 4,000 pounds of bombs, to operate at an altitude of 35,000 feet, and at a speed between 300 and 400 miles an hour. But at present we are in a period of arrested development in air power plants because we cannot easily get away from the internal-combustion engine. We are making these bigger and more powerful continually, at present up to about 4,000 horsepower, while our engine fuel is being made safer and more economical. Steam engines and rocket engines are being experimented with, but our greatest aerial development will come with the development of an entirely new type of engine, lighter, stronger, safer and less complicated. The modern gasoline engine has from 2,000 to 5,000 different parts, one of the most complicated mechanisms ever made, not excepting the mechanical toys of the middle ages.
From DRAWING BOARD to PROVING GROUND

WHEN a "flock of geese" turned out to be a fleet of airplanes, an idea was born in the mind of an engineer. And that idea led to the development of an entirely new design for automobiles. Ever alert for ideas that may result in a more efficient motor, a better brake or a safer steering system, the engineer usually is the first to catch a vision of what is to come. Then, from its conception in the engineer's brain, every new car and every part in it traces a trail of trial and error over the drafting board, through wind tunnel and precision tests, to the proving ground and Anally into actual production.
Realistic Story of Steel Told in Photo-Murals

Wait a minute. You mean that’s a photograph? Not a window? Wow, they sure had me fooled. Realistic Story of Steel Told in Photo-Murals Interesting scenes in the steel industry, from the mine to finished bridges and buildings, decorate the walls of one room in a Chicago club. The story is told in photo-murals. In […]
Why You Can't Ring Bell of "High Striker"

Why You Can’t Ring Bell of “High Striker” Ringing the bell of the “high striker” at the county fair appears to be easy when the operator, frequently a small man, tries it. On the other hand strong men find it difficult. The explanation is simple. At some fairs, the machine is “fixed” so that the […]
CHEATING DEATH for a LIVING

By BOB ROSE I BELONG to a strange fraternity. After nineteen years, only six of the original 150 remain. We are the motion-picture stunt men. I have seen most of the others die, one after another, in performing dangerous feats. Yet, during my own career I was never seriously injured in doing 560 parachute leaps, eighty plane changes in the air, 150 dives from heights above ninety feet, 180 automobile wrecks, riding horses over cliffs sixty-five times and staging fights atop ninety-foot ship masts and making the proper fall into the water so many times I have lost count. The pioneer stunt men who remain besides myself are Cliff Lyons, Yakima Canutt, Duke Green, Gordon Carveth and Frank Clark.
NEIGHBORS OF THE AIR

"C Qâ€”C Qâ€”W6HHU calling and standing by---------." This was the call from Albert Hanson, radio amateur, which brought details of the disastrous Long Beach earthquake and started the rush of relief. With telephone and telegraph lines crippled, radio "hams" restored communication and shattered the veil of si-lence into which the tragedy had plunged the stricken area.
LIVE PIGS SHIPPED IN BASKETS TO SAVE CARGO SPACE

LIVE PIGS SHIPPED IN BASKETS TO SAVE CARGO SPACE In order to save space in shipping, small live pigs are being sent in baskets for long distances in south China. By placing them in the baskets, large numbers can be piled in a comparatively small space and the porkers can be handled like any inanimate […]
News Carrying Pigeons Aid Japanese Press (Feb, 1935)

News Carrying Pigeons Aid Japanese Press Latest news and undeveloped photographic film frequently are rushed from the scene of a big event to Japanese newspapers by pigeons. The birds have been found a handy substitute for telegraph and telephone, being sent winging to headquarters with the latest scores of games or news bulletins. This flying […]
IF THE TELEPHONE WERE NOT THERE!

IF THE TELEPHONE WERE NOT THERE! Many times each day you reach for the telephone on your desk at the office or in its familiar spot at home. It is an old and trusted friend. You scarcely give a thought to what it means to a busy day. Yet suppose the telephone were not there! […]