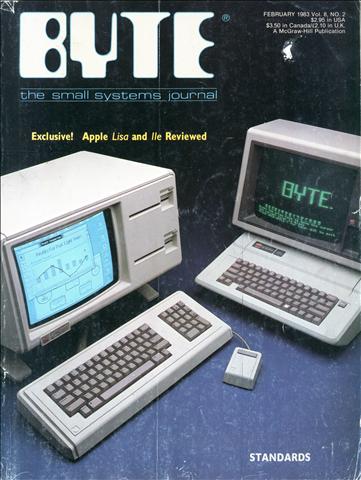 It's like having an Apple II with all the extras built in. It all began in the summer of 1977 at the West Coast Computer Faire. A fledgling computer company with an unusual nameâ€”Apple Computerâ€” introduced a new hobby computer called the Apple II. The new Apple II was an impressive machine. It had BASIC in ROM (read-only memory), a built-in Teletype-style keyboard, high-resolution color graphics, and, once the new 16K-bit semiconductor memory devices became available, its memory could be expanded all the way up to 48K bytes. One of the first true home computers, it was completely self-contained, needing only a TV set for a display and a common cassette recorder for data storage. Today, almost everyone is familiar with the Apple II. It can be found in homes, schools, laboratories, and businesses, and is being used in a wide variety of ways. During the past five years, an entire subindustry has sprung up around it that has, in turn, stimulated further Apple II sales.
The Lisa Computer System - Apple designs a new kind of machine

Gregg Williams Senior Editor I had an interesting conversation with an engineer on a recent flight from San Francisco to New York. He knew only a little about microcomputers, but he was aware that their presence is slowly becoming more common in the workplace. "Sure, the industry is healthy, but it's still only reaching a few people," he said. "Most people won't use computers â€” they're afraid of them, they don't know what to use them for, or it's too much trouble to use them. Before computers become really profitable, they're going to have to be very easy to use. They have to be simpler. They've got to be useful in the office." He continued, "We've got to stop using paper â€” which means the computer has to do word processing, filing, electronic mail, everything â€” or it'll be too much trouble having some things on the computer and others on paper. Then you've got to be able to talk to other computers â€” other computers like yours and some big corporate computer that's halfway across the country. Sure, it's a lot of stuff, but when you get all that together, then you'll see computers really take off."
A behind-the-scenes look at the development of Apple's Lisa

Chris Morgan Gregg Williams, Senior Editor Phil Lemmons, West Coast Editor Of the more than 90 members of the Apple engineering staff who participated in the Lisa project, Wayne Rosing, Bruce Daniels, and Larry Tesler are three of those who were most responsible for its final form. Rosing, formerly of the Digital Equipment Company, oversaw hardware development until Lisa went into pilot manufacture and then assumed responsibility for technical management of the entire Lisa project. Daniels and Tesler were responsible for Lisa's systems software and applications software, respectively. Chris Morgan, senior editor Gregg Williams, and West Coast editor Phil Lemmons interviewed the three at Apple's headquarters in Cupertino, California, last October.