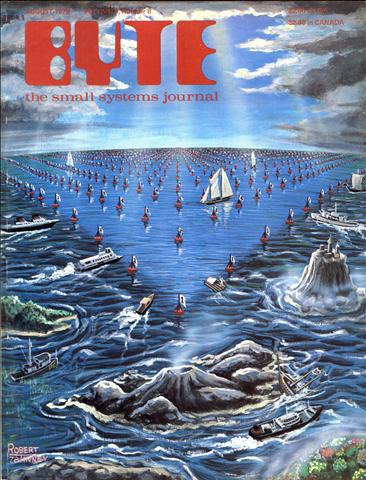 Dr James M Williams 58 Trumbull St New Haven CT 06510 In "Part 1: Early Automata," page 48, July 1978 BYTE, we traced the development of antique mechanical computers up to the middle of the 18th century, and described such devices as Vaucanson's mechanical duck. Now we continue with a discussion of talking, writing and music playing automata of the 18th and 19th centuries. (The discussion is not meant to be an exhaustive one, of course, since that would be beyond the scope of this series.) Later Automata.
About the Cover: Pascal's Triangle

by Carl Helmers It is rare when one can indulge in one's prejudices with relative impunity, poking a bit of good humored fun to make a point. The design of the cover, entitled "Pascal's Triangle" provided just such an opportunity. The cover was executed by Robert Tinney, but the prejudices are all mine and were given to him as a fairly detailed script. The point is that Pascal is here, it is consistent with use by small computers, such as many readers own, and it is available in the form of the UCSD software system at quite a nominal charge above the cost of the hardware required.
Philadelphia's 179 Year Old Android

Charles F Penniman The Franklin Institute Philadelphia PA 19103 Cuckoo clocks, computers and dolls with rolling eyes somehow fascinate us all. The fascination seems to stem from our delight that people can make contraptions which do things by contrivance that are usually done by living men and beasts. But whatever the reason for it, we find animated statues in ancient China and in the temples of classical Greece. In Europe, the clockmakers of the Renaissance often adorned their works with marvelous moving figures. The famous tower clocks of Berne and Messina and the remarkable clock in the Cathedral at Strasbourg are just a few examples.