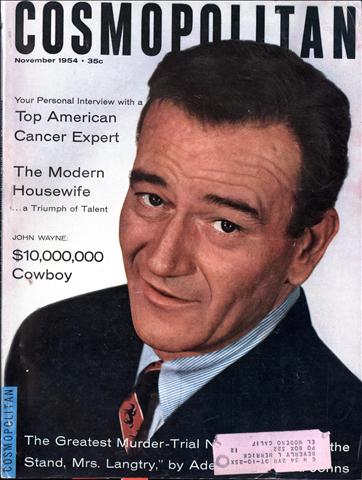 Next Issue:
This is the latest issue we have of this publication.
JOHN WAYNE

Discovered by Director John Ford in the late twenties, Wayne progressed from stagehand to star. His simple formula, "Everybody loves a hero," has kept him gainfully employed in nearly two hundred movies, with no end in sight. BY MARTIN SCOTT John Wayne, a balding and rather homely forty-seven-year-old former football player, is one of Hollywood's three biggest box-office attractions, and has been for the past four years. Yet according to all the accepted rules for success, John Wayne has no business being a movie star.
The Powder Blue Dragon -Kurt Vonnegut, Jr

She was romance, beauty, a dream for a lifetime. He had to have her, no matter what the cost. BY KURT VONNEGUT, JR. A thin young man, with big, grimy hands, crossed the sun-softened asphalt of the village street, from the automobile showroom to the drugstore, his self-consciousness thinly disguised by his pretense of being on important business.
JON WHITCOMB Watches the Filming of the Fabulous Life of Genghis Khan

Cosmopolitan's artist-reporter tells how it feels to be part of a $6,000,000 Mongolian horde loose in Utah's 115-degree heat. The sun poured down out of a white sky onto the bright orange desert sand, and I could feel little rivers of sweat creep down my neck. Waves of heat bounced off the gaudy Tatar huts dotting the valley. People standing near were wearing fur hats, fur coats, and heavy leather pants.
An Expert Answers 37 Most-asked Questions About Cancer

IN A TAPE-RECORDED SESSION, Dr. Brewster S. Miller (right), for more than six years director of professional education of the American Cancer Society, gives the vital answers to author Donald G. Cooley's comprehensive queries. A world-famous cancer authority, Dr. Miller was a delegate to the 1954 International Cancer Congress, held in Sao Paulo, Brazil. Q. Dr. Miller, it is kind of you to consent to this interview, and I want to thank you on behalf of readers of Cosmopolitan Magazine, who will feel they are sitting across a desk from you, as I am, getting authoritative answers to questions that are of grave concern to all of us. Cancer is a word that frightens everybody. What does it mean? What is cancer?
Scotland's Best-kept Secret

No, other country in the world has been able to make Scotch whisky. The Scots have been doing it for over five hundred years, and even they don't know how they do it BY JOHN KOBLER Illustrated by Erik Blegvad town with seven distilleries ... in one mile of Highland river; they used the same water, peat, and malt . . . yet each spirit had its own individual bouquet." During a jaunt through Scotland not long ago, I had an opportunity to inquire into the mystery under ideal conditions— while sampling some twenty-year-old Ballantine's in a snug little pub facing Loch Lomond, in the company of Mr. John Grant, director emeritus of Hiram Walker & Sons (Scotland). I failed to penetrate the mystery, but I learned a lot of other things about Scotch whisky.
Assorted Ads

This feels like Sky Mall ’54. I really do want one of the “Quackie” Safe-T-Snippers though.
Two Girls in Spain

Made of CREAMY LATEX Non-Allergenic. COOL-VENTED for comfort. SOFTER, SMOOTHER, LONGER LASTING.
THE AMERICAN HOUSEWIFE: "Proudest profession of them all"

Here's how Jeanne Ludlow, Philadelphia mother of four, answers "marriage experts" who give advice on how to escape the "dull" duties of a housewife BY MICHAEL DRURY Professional bemoaners not only lambaste the American housewife, they also explain sympathetically how she deteriorated into being part drudge, part soap-opera addict—and why, when she goes to a party, she's likely to drink too much. The housewife has been told she has been grievously wronged by civilization's social pattern—her budding premarriage talents crushed by child care and domestic routine.