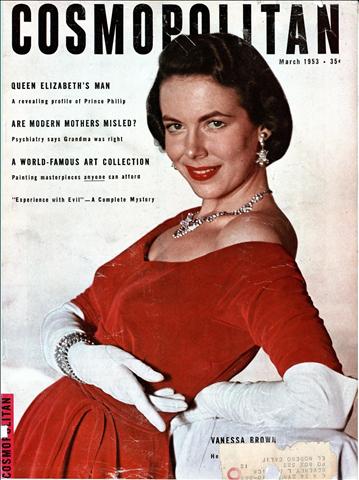 When a girl changes schools, what's a good move? _ Try stalking the stags _Pick yourself a pal As "the new girl," you'll be noticed —but don't expect a brass band greeting. (Your new classmates may be shy, too!) Why not ask one gal to share a Slurp Special at the local fizz palace? Bimebye, you'll be buddies. Getting okayed by the ladies first — leads to meeting the boy-people. Same as the confidence you need, on certain days, begins with the comfort you get with Kotex. This napkin (so absorbent!) has softness that holds its shape. Made to stay soft for hours and hours!
THE MODEL LIFE

THE MODEL LIFE THE COSMOPOLITAN LOOK BY VIRGINIA C. WILLIAMS Tippi Hedrin, top-flight photographers’ model, leads a hectic double life. Monday to Friday she runs from one New York studio appointment to the next. On Friday she boards a train to Darlington, Maryland, and the farm where she and her husband, Peter Atwill Griffith, raise […]
Are Patent Medicines Dangerous?

BY ROBERT L. HEILBRONER Down in Washington. D.C., a constant, unobtrusive cold war is being waged by three organizations—the Federal Food and Drug Administration, the Federal Trade Commission, and a quiet institution known as The Proprietary Association. These three groups are vigilantly protecting the consumer against foods, drugs, and cosmetics that are adulterated, or labeled or advertised with false or misleading statements. They also do occasional battle with the remnants of the once-famous quack-medicine makers, known to some as "the patent-medicine industry." They were fugitives from justice, with a record both long and nauseating. Theirs was at best a cold-blooded operation built on the principle that there is no buck so easy to wangle as the buck of a person in pain.
Interview with a Rolls-Royce

Mechanics love the motor, ladies adore the elegance. Every year 250 Americans pay $10,310 and up to own a Rolls. And one potentate has sixty in his garage! BY JOHN KOBLER The vast majority of humankind plod through life without once setting foot inside a Rolls-Royce automobile. This is not astonishing, if only because barely 30,000 Rolls-Royces have been assembled during the half century since three Londoners founded Rolls-Royce Limited. So it may be imagined with what delusions of grandeur this Plymouth-bound reporter in one day rode in two Rollses and drove a third, thus enjoying a fleeting intimacy with approximately .0001 of all the Rollses ever built.
Her Brains Didn't Get in Her Way

First her I.Q., then her beauty, brought fame and fortune to Vanessa Brown. Now, in Broadway's funniest hit, she demonstrates that nothing succeeds like sex BY HYMAN GOLDBERG When a movie called "I've Always Loved You" opened several years ago, a young critic named Smylla Brind declared in the student newspaper of the University of California at Los Angeles that Vanessa Brown, the feminine lead, made the picture seem much better than it was. Miss Brown would bear watching, the young critic wrote, for she was certain to make her mark as a serious actress.