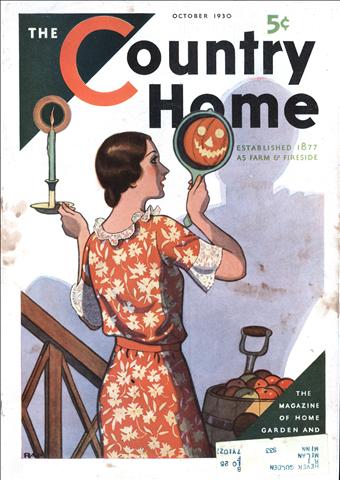 Next Issue:
This is the latest issue we have of this publication.
SOMETHING A LITTLE SPECIAL

HERE'S a meal that's going to keep them exclaiming. A most excellent dinner from —did someone say "from soup to nuts"? Nothing so commonplace, if you please. From Clam-Juice Cocktail to Floating Heart Montmorency is more like it! And in between, delicious Spaghetti Caruso, Lamb Chops Vanderbilt prepared in smartly different fashion, and a Romaine Salad fragrant with luscious fruit. A novelty menu, yet inexpensive and simple.
For cuts, bruises, wounds, stings—all infections-LISTERINE—instantly!

Whenever the skin is broken, there is acute danger of infection. Germs of infection may reach the wound from other parts of the skin surface or the air may transmit them.
you could buy hanes underwear with BOTH EYES SHUT

Biggest VALUES for 25 YEARS! Ask your wife to examine Hanes winter underwear. In three seconds, with her eyes closed and merely by "touch," she would be sure of its unusual quality. The hanespun cotton is soft, pleasantly fleecy but lacks any "scratch.
Your FREE copy of this new "NATIONAL" style book offers Lowest Prices in years...!

IF you have not yet received your copy of this season's money-saving "NATIONAL" Style Book, send for it today without fail. In this beautiful book you will find displayed the newest styles — the favored New York and Paris fashions—at America's Lowest Prices — low prices that have not been possible for many years.
Here's Real Farm Relief!

THIS farm relief problem is like the weather; everybody talks about it and nobody does anything. But here's a form of farm relief that Congress doesn't have to settle . . . that you don't have to wait years for. Over two million farmers have experienced it already. It's a relief from tired feet, aching arches . . . from hard, chafing shoes after cold wet feet. . . from expensive shoe bills. You'll find this certain relief in Wolverine Shell Horsehide Work Shoes.
It sings a song of crispness!

So now we know that Crackle was the oldest of the Krispie children, Snap and Pop had yet to be born in 1930. It sings a song of crispness! YOU CAN’T imagine a more tempting cereal! So crisp it actually crackles when you pour on milk or cream. And how good these nourishing rice bubbles […]
Extra Hours of Freedom When the NEW MAYTAG comes to the Farm

TIRED muscles and frayed nerves are no longer a penalty of washday when the NEW Maytag comes. Mother is happier and sweeter... a better mother, a better wife... and many precious hours are saved each week for her profit and enjoyment. Washing the clothes is no longer the hardest work of the farm house after the New Maytag comes. Washday changes to a pleasant hour or two. Clothes are cleaned without harmful hand-rubbing or harsh bleaching agents. They are washed by water action alone in the new Maytag one-piece, cast-aluminum tub.
"So Easy to Turn - Saves Mother's Back

American SEPARATOR WOMEN like the close-skimming New American Separator. Watch-type pivot ball-bearing and scientifically balanced bowl make turning so easy I "It certainly is the separator for worn en, "says John Rivinius, of Alberta, "our 12-year old girl turns through milk from 10 cows and likes it fine!" "Turning the American is more like play than work, " writes J. A. Shackleton, Misouri. Others say: "Easiest running separator I ever owned ". Our 10-year old child maintains speed with ease."
The Same Good Car Through Many Seasons

AT THIS SEASON of the year, as autumn prepares to bid adieu, it is good to know that the new Ford is fully prepared to meet the sterner needs of winter driving. Cold weather emphasizes the value of its simplicity of design and its trustworthy performance under all conditions. There is an enduring quality, too, in its exterior finish.
BEWARE THE BANK GOBBLER

George W. Hensel, Jr., warns of the chain gang that threatens small towns, in an interview with JOHN T. FLYNN I WAS sitting in George Hensel's big parlor talking with him about the new bank building just on the other side of the road. Hensel is the president of that bank and he was telling me about it and about other country banks and bankers he had known. This was in Quarryville, Lancaster County, Pennsylvania, a village of a thousand souls in the center of one of the richest farming sections in the world. Go south from that bank a dozen miles and you will almost run into the Susquehanna as she flows into Maryland. Hensel's bank stands at a fork in the road.
Here's Happiness

IT'S WINTER. The sun's short day is quickly over. Cold, bleak, dreary darkness penetrates the countryside. But in more than 350,000 farm homes there's happiness. Electricity by Delco-Light spreads its cheerful brightness. 350,000 farm families enjoy just reward of the day's toil. Will Your Home be One of Them?
Colorful Kitchens with MONARCH RANGES

— to harmonize with any Color Scheme FOR ALL FUELS COAL-WOOD The good, old reliable Monarch, made as ever of unbreakable malleable iron with leak-proof riveted seams. The only range offering ALL of the advantages of malleable construction, yet as modern in beauty as any range can be. Styles and sizes to meet every need. (Illustrations above and No. 1).
HIGHLIGHTS OF AUTUMN FASHIONS

Let's go adventuring and choose new clothes for fall by BETTY THORN LEY "LONGER? Of course they're not wearing their skirts any longer. I Didn't you notice my cousin Eleanor? She spends a lot of L time and money on her clothes—and her skirts weren't longer," says Mrs. Brown, laying down the law to Mrs. Jones. Neither lady had asked whether Cousin Eleanor was wearing her new clothes or economizing on a motor trip by using up her old wardrobe. Mrs. Jones, being suggestible, is given her first wrong steer.