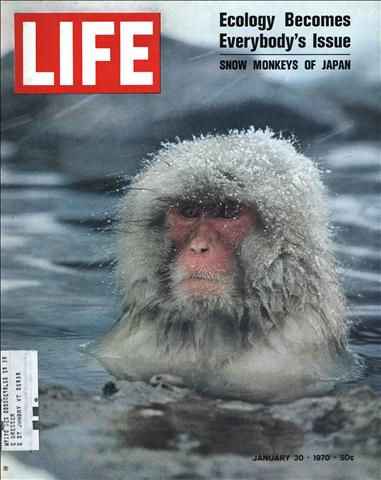 Mar, 1970
ECOLOGY a cause becomes a mass movement

Demonstrators organize to defend vanishing trees, wetlands and unpolluted air. Unless something is done to reverse environmental deterioration, say many qualified experts, horrors lie in wait. Others disagree, but scientists have solid experimental and theoretical evidence to support each of the following predictions: In a decade, urban dwellers will have to wear gas masks to survive air pollution. In the early 1980s air pollution combined with a temperature inversion will kill thousands in some U.S. city.
Tracks That Violence Leaves

Are Americans becoming addicted to violence? And if so, does the violence that can be seen daily on television, for instance, contribute to the addiction? Dr. Victor Bailey Cline, a University of Utah clinical psychologist, has started a series of experiments which seem to him to point to a definite affirmative conclusion. In a one-seat theater in his Salt Lake City laboratory, Dr. Cline, left, and an associate, Dr. John Atzet, show motion pictures of kinds and degrees of violence to subjects hung with sensors that produce a physiograph (left) of their responses to what is appearing on the screen.
My man likes something unexpected now and then

My man likes something unexpected now and then. That’s why I serve him rice. Rice is full of tasty surprises. It’s as quick and easy to vary as adding chopped chives. Or topping with paprika. Or tossing with crumbled bacon and sour cream. Or shredded Cheddar cheese. Or toasted almonds. In fact, there are so […]
The Handy Uses of a Home Computer

* Planning a dinner menu * Balancing bank accounts * Doing school homework * Figuring out income tax * Printing invitations * Keeping the budget Computers for the home have been envisioned by science fiction writers and engineers ever since a huge, unwieldy prototype was developed 25 years ago. The whole futuristic age they prophesied, with an omnipotent electronic monster named Horace in every living room, is still a long way from realization, but compact consumer computers have quietly entered the household. While the market hardly rivals TV sets or refrigerators, the computer-as-home-appliance is now more than just a toy for the wealthy or a mysterious instrument for technical specialists.