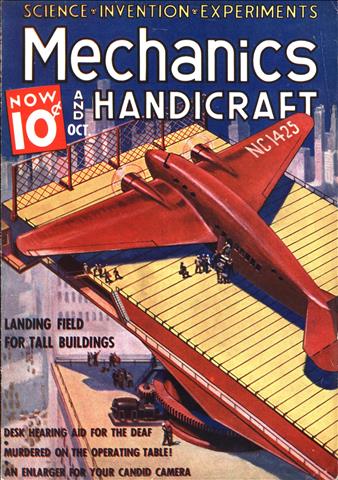 The author will be glad to answer questions relating to these and to other types of inventions. However, no letter will be answered unless a properly stamped and self-addressed envelope is enclosed. Do not send any models.
More Pleasure at the Seashore

SHOWN in the upper right corner is a simple and practical "non-skid" surf board with which you can bank and make turns. Two barrel staves are fastened at approximately a 25 degree angle to two substantial irons, which in turn are fastened to a heavy plank cut as shown in the illustration. The use of this surf board can easily be mastered in fifteen or twenty minutes.
Venetian Blinds of Steel

Bullet-proof steel protection for bank tellers, developed along the principle of Venetian blinds is the invention of J. A. Boivin, Quebec, Canada.
Man's Hell on Earth!

Natural lakes of boiling water, spitting sulphuric flames, boiling mud, and incandescent lava, furnish the settings for a group of hideous demons which are worshipped even to this day. By A. N. Mirzaoff NOT long ago a group of French explorers came across a small group of islands off the southern tip of the Island of Kyushu or Kiushiu, Japan. Although there is nothing new about the existence of these islands, the average student knows little of their history.
A Hand-to-Hand Combat with Sea Monsters

HAVING taken upon himself the occupation of slaughtering deep sea monsters, armed with no other weapon than a knife, Wallace Casewell, officiating captain and constable of Panama City, Florida, a well built chap in his early forties, has spent years in this dangerous and not exactly lucrative hobby —and all because he claims that, as a boy, he conceived a vital dislike and disdain for sharks, turtles, swordfish and other sea killers.
Inventors' Brain Children

Many inventors vied with each other for public favor when they exhibited working or other models at the recent annual convention of the nation's inventors, held in New York. Some of the most outstanding devices of popular interest are illustrated on the accompanying pages.
Enlarger for Your Candid Camera Made From Globe

By Wayne Daniel Clegg How many times have you looked into the window of a photo store, admired the expensive miniature enlargers and longed to be the proud possessor of one? But your pocket reveals your total financial resources—three precious dollars. With that money and a little time and energy, there is no reason why you cannot have a miniature enlarger just as attractive and efficient as a factory-made model.
It's in the Bottle

WHEN one sees large wooden objects in a bottle, one often wonders how the articles were placed into the glass containers. Often, those viewing the objects express the opinion that the "glass was blown around the object." Such, however, is not the case.
Oddities of Physics

Science is much closer to our daily lives than many of us believe. Some of the simplest phenomena and everyday occurrences which do not strike one as of any particular interest, abound with scientific explanations.
A Machine with a "Memory"

THIS machine has the faculty for picking up the results of electrical disturbances and registering them in its "mind." A short time later they are illustrated on an oscilloscope, where photographs are made. The entire operation is automatic.
Murdered On The Operating Table!

operating table?" Surprisingly, operating room fires still happen quite often. The FDA has an initiative to help reduce the number of occurrences. ::image_gallery::

Murdered On The Operating Table! AN anesthetized patient on an operating table — the surgeon approaches with a white - hot instrument—the patient explodes and two operating room attendants are injured!—The clipping from the New York Times tells the story. Medical history will show that this is not the first time such an accident occurred. That same history should also record that there is no reason why such accidents should happen.

THOSE who have not developed that esthetic sense of art so necessary to appreciate a "fur-lined cup and saucer" which the surrealists exhibited (and which was illustrated in a previous issue of this publication) will acknowledge that Robert H. Blickenderf has developed something equally striking— yet, when properly viewed, possessing all those elements of art which have been expounded by the great masters.
Fire Box Foils False Alarms

Obviously any prankster would be utterly dissuaded by an ear-shattering siren. Fire Box Foils False Alarms A NEW type of fire alarm box, equipped with an ear-shattering siren that sets up a wail audible for blocks (much to the discomfiture of anyone using it unlawfully) made its debut recently at the Fire Chiefs’ annual convention […]
A Boardwalk Train

A Boardwalk Train A TRACKLESS train, run by storage batteries, now appears in Atlantic City. The train was one of the exhibits of the Convention of the Association of American Railroads, and is the first of a group to take the place of wheel chairs.
Blind Men Make Radios

THE world's most unusual radio factory is in operation in New York City where 304 blind men build radio sets on a production scale. Every operation is performed by them, even to soldering, and it seems that these men make fewer mistakes and do a better job than workers not handicapped with a loss of sight.
Air-powered Tricycle

UP IN Fairbanks, Alaska, a youth who likes to tinker has converted a discarded airplane dolly, an old bicycle wheel, and wrecked airplane parts, into an air-powered tricycle which attains a speed of 15 m.p.h.
Airplane Field for Tall City Buildings

New invention is expected to solve the problem of providing aviation facilities for large cities. Platforms are designed to operate on the roofs of large buildings and permit happy landings and easy take-offs. AN invention of J. Herbert Jones of Brooklyn, N.Y., is expected to revolutionize the problem of airplane landings and take-offs in restricted areas, such as on the tops of large buildings, decks of ships, water fronts along the coast, or small land areas.
A Mobile Home — The Latest Innovation

HIS home on wheels, mounted upon a 1-1/2-ton truck chassis, is the newest thing in the motor world. This type of unit provides ample room within for complete equipment but is much more easily handled and parked than the regular trailers, inasmuch as it is unified.
World's Largest Vertical Letter File

THE largest vertical letter file in the world was built in Prague, Czechoslovakia. It consists of 3,000 drawers, 10 feet high, reaching from floor to ceiling and covering approximately 4,000 square feet. The drawers are all equipped with roller bearings.
Ancient Locks Portray Genius

One of the finest collections of locks and keys in the whole world is owned, not by a collector of rarest objects, but by an internationally famous locksmith. It includes over four hundred of the most valued and historical locks in the world and completely depicts the evolution of some of the intricate devices developed by mechanics down through the ages.
Photographic Record of Telephone Meters

Photographic Record of Telephone Meters INSTEAD of the usual method of reading and recording the number registered by your telephone meter, transferring this to the accounting department where the record is copied and tabulated and the bills are made out, the newest system consists of supplying a photographic record of your phone number and the […]