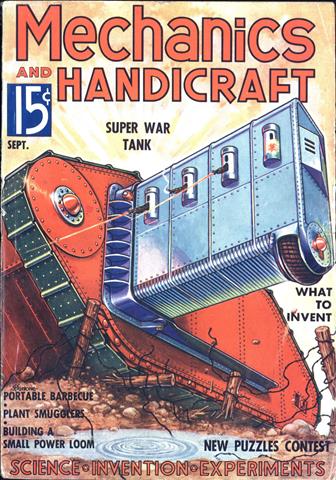 Musical programs now transmitted over telephone lines. FOR many years the possibility of using electric light or telephone lines for transmitting "radio" programs has been considered. In the rather old "wired wireless" effect, the voice and music were to be impressed upon the regular house - lighting circuits at radio frequencies, and were then to be changed to audio frequencies.
Songbirds for Food

Hundreds of thousands of migratory songbirds are being snared and trapped for use as food in Northern Italy. BECAUSE of shortage of meat, partly forced through the League of Nations sanctions against Italy, the trapping and shooting of migratory songbirds has been lately revived on the Asiago Plateau in Northern Italy.
Streamlined Autos of the Future

Editorially, we have stated that present-day automobiles, although called by the manufacturers, "streamlined cars," are not streamlined at all. It is true that the resistance these cars offer to air currents, traveling along the line the car is moving, is considerably less than that offered by the car of 6 or 8 years ago, if measured above the chassis level.
Lecturer Controls All Demonstrations

WHAT is called the most novel and original control system is now in operation in the Skinner Hall of Music at Vassar College. Conceived by Professor George B. Dickinson, of the Department of Music, this unique system permits the professor to go through the whole routine without moving a step away from his lecture table, but cutting in the big organ, radio or phonograph, stereopticon, piano, etc., by merely pressing a button or closing a switch.
Fishing for Oil

A very valuable oil, for watches and fine machinery, is obtained from the blubber of the "blackfish"—which is really not a fish, but a species of small whale, attaining a length of 30 feet and weighing three tons or more. THE average person, hearing of a "blackfish," imagines it to be an ordinary fish, about the size of a herring. But there are many fish called "black-fish" and one of them (sometimes called the "pilot-whale") is not a fish at all, but a mammal (a species of small whale). A full-grown blackfish averages 30 feet in length and weighs about 3 tons.
Would You Believe It? Oddities from Many Lands

Another "Death Ray"? "DEATH-RAY" inventors are legendary. Each strives to produce some mysterious "ray" which will kill at a distance. Mr. Henry Fleur claims to have invented a machine to do this and, according to press reports, proved that he could kill snakes, lizards and termites. Although heat may kill at a distance, no new ray has been discovered to date and the known ones, even in combination, are not "death rays," in the accepted meaning of this term.
WHAT TO INVENT

The author will be glad to answer questions relating to these and to other types of inventions. However, no letter will be answered unless a properly stamped and self-addressed envelope is enclosed. By RAYMOND FRANCIS YATES SINCE the new awakening of business, hundreds of "gadgeteers" working in their attics and cellar shops have developed new inventions and have discovered that manufacturers, hungry for new ideas,
Physical and Chemical Tricks!

A few stunts the embryo scientist can present to his audience which are sure to mystify, astound or amaze them. All of the chemicals" used are readily available in the home, or in the corner drug store, and are inexpensive.
Super War Tanks

Light tank has been so modified that it becomes a land dread-naught, many times as destructive as the ordinary tank. WHEN tanks are used in trench warfare, the infantry advances behind them, using them as shields. The disadvantages of this practice are that the men are exposed to enemy fire, and their offensive value is negligible, until they approach a position for hand-to-hand combat.
Submarine Auto

LOU SENARENS developed many outlandish and queer vessels for Frank Reade, the hero of one of his groups of nickel novelettes. One of these mysterious vessels was an automobile which could travel on land, in the water, or under the water, under its own power, and, strange as it may seem, such a combination craft has actually been invented and constructed by Michel Andre of France.
Signal Light for Babies' Cribs

IN the maternity ward in European hospitals a unique signal light system has been installed. Under each baby are two sheets of tinfoil separated by thin absorbent cloth. The tinfoil sheets are punched with a number of holes.
STRANGER THAN TRUTH

Isn’t the idea that fiction is stranger than truth kind of the default assumption? STRANGER THAN TRUTH AMAZING, ASTOUNDING, FANTASTIC STORIES THAT PROBE THE FURTHEST REACHES OF THE IMAGINATION — BY A. MERRITT, OTIS ADELBERT KLINE, RAY CUMMINGS AND OTHERS in the October THRILLING WONDER STORIES 15c AT ALL STANDS — — EVERYWHERE
Snow Storms Made to Order

By Prof. S. L. Bastyamov of the Artificial Climate Laboratory THE heat of the Turkmenian sun blazes a few feet from biting Siberian frost. Balmy Caucasian weather is separated by a thin partition from a crisp Arctic day. All seasons of the year, summer and winter temperatures, calm weather and winds, humidity and drought are reproduced in the same place, in the same building—the Moscow Laboratory of Climate.
Travel in your Home

This deluxe home on wheels contains every convenience of the modern home—and some not found even there. THE French inventor, Loubet, who holds a record number of patents on practical sporting and traveling equipment, has recently demonstrated the latest of his constructions for the benefit of people who like to travel and take their homes with them.
Making A Power Loom

This automatic device will weave cloth. Its size may be changed to suit the individual builder. By JAMES MILLER WEAVING, as an industry or art, is so old that its origin is unknown. The most ancient example of weaving of which we know is a flax-like cloth found in the ruins of the Swiss lake dwellings, supposedly of the Stone Age.
Hunting Miniatures

24,000 pieces in world's largest museum of the smallest articles. ONE of the most remarkable exhibitions of miniatures, which has been collected painstakingly over a period of sixteen years by Mr. Jules Charbeneau, is on exhibition in St. Louis. The articles come from thirty countries and the collection consists of 24,000 different items.
A Curious Industry

Buffalo chips once served as fuel in this country. Cow dung has many uses — besides that of a fertilizer — in the Far East. SOME of the most peculiar customs in the world originate in India, where beliefs and religions have flourished from ancient times, without any change from contact with the civilization of the rest of the world. To the average traveller, India presents a glamorous and fascinating study, inasmuch as it is so completely impossible to grasp the basis for the weird ideas and beliefs which are firmly fastened in the Oriental mind.
Glass — a New Textile

Glass, the magical material, is playing a new drama with glamour that is more fascinating than the tricks played by that ancient Asiatic magician, Aladdin. By A. N. MIRZAOFF WHEN that clever French statesman, Colbert, stole the secrets of Venetian glass makers, to make his France the center of world arts and industries, he little realized that, a couple of centuries later, the gleaming beauty of glass, which was then restricted to the manufacture of goblets and carafes, would be serving a hundred and one purposes in almost every industry to which the 20th Century man is heir.
Electric Tractors

The key to a good electric tractor is to sup-supply the current. Electric Tractors THE Soviet Union increasingly widens the application of electric power to agriculture. The large network of electric power stations has made it possible to use electricity in running tractors, and other agricultural machines. The photo shows an electric caterpillar tractor. Above […]
Outwitting the Plant Smugglers

Sometimes the smuggling of plants is innocently intended—the "law breakers" never giving a thought to the dangerous pests they might bring into the country with the fruit, plants or vegetables. On the other hand, some plant smuggling is done because of the money such contraband brings.
People Who Live in Glass Houses

Did they give this picture to an intern and say “Here, you have five minutes, write something!”? Because a quarter of the “article” is composed of the owner’s name and genealogy and the headline is just the first half of a proverb that has nothing to do with the piece. Or maybe the Pinkham’s of […]
A Tunnel Across the English Channel?

Among the great technical projects of the future, the construction of a tunnel under the English Channel figures as one of the most probable. In fact, it appears so easy that one may even ask why it has not been done. In answer to that question, this inside story will be of interest.
Phono-Film Reel

A very efficient and cheap new method of sound reproduction by W. E. SCHRAGE AS shown by the great number of electrically transcribed programs on the radio, which gave such a setback to the phonograph industry, broadcasting even today relies to a considerable extent on mechanical sound recording.
Fame and Fortune from Sandwiches

The Sandwich King of Denmark and his two hundred varieties of Smoerrebroed. THE proverb, "The way to a man's heart lies through his stomach," could well have originated in Denmark. The Danes love good food and, above all, they like their special sandwiches, called Smoerrebroed.
Germ-Killing Lights for Safer Surgery

Bacteria destroying lamps for the operating room were recently demonstrated to the American Society of Surgeons. The lamp (below) sends out ultra-violet rays which have the property of killing germs in 60 seconds, yet not harming the patient.