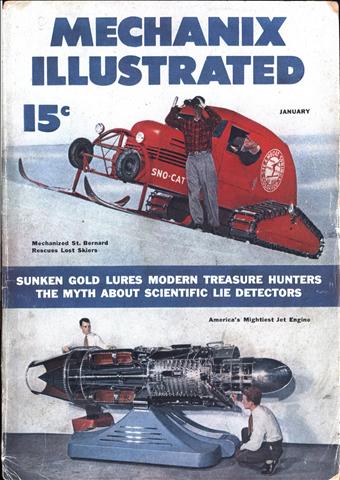 Feb, 1950
Invention Clinic - How To Be an Inventor

BY JOSEPH H. KRAUS. Big Money from Little Ideas Few inventors appreciate the hardships that have gone into making even the simplest invention a success.
Mechanized St. Bernard

A new breed of St. Bernard is making news for Steamboat Springs—a western Colorado winter resort—by rescuing skiers lost in the high Rockies. This latest hero of the snow, however, is not a canine but a cat—a novel, snow-traveling tractor invented and produced by Emmitt M. Tucker of Medford, Oregon, and known as the Sno-Cat.
MI Tests the Willys Jeepster and Station Wagon

"This wagon could almost climb the side of a building!" says Tom McCahill after testing the Jeep's newest descendant. HEWING to the line that nothing succeeds like success, Little Willie Jeep, the bottom-busting toughie of war fame, has spread himself out four ways, all heading in the same general direction.
The Myth About Scientific Lie Detectors

"They're just a form of psychological rubber hose," says the author, "but they're applied with subtlety instead, of the usual brutality." By Robert Hertzberg After undergoing a lie-detector test at police headquarters, Joe McGlook, 37, no home, signed a confession last night admitting his participation in the fatal hold-up several days ago of a gas station attendant on River Road. ITEMS like that appear frequently in daily newspapers and cause many people to wonder. How do lie detectors work? Do they really work at all?
I COUNT 150 MILLION NOSES

By Philip M. Hauser, Acting Director, U. S. Bureau of the Census ONE of these days an inquisitive stranger will knock at your door and start asking questions. Don't throw him out for he'll probably be one of our 150,000 workers gathering information for one of Uncle Sam's most gigantic undertakings—the 1950 Census of Population. Housing and Agriculture!
Unclaimed Fortunes Under The Sea

Off our own shores, within tantalizing reach of you or any other would-be-millionaire, lie fabulous treasures—finders-keepers! By West Peterson LOOKING for money? Gold is where you I find it—and there's plenty of that precious stuff down at the bottom of the ocean. On page 62 Mechanix Illustrated shows you just where you can drop anchor on $150,000,000 in sunken treasure, right along our coasts. But there's billions more, scattered almost everywhere under the seven seas—all yours for the taking!
NEW on the ROAD

Rolling Home had long been the vehicular dream of Paul Prigg of Miami. Then one day he decided he would stop dreaming and make the thing. Here it is! It's built of aluminum on a Packard chassis and motor with special heavy-duty springs. It sleeps four, has hot and cold water, closets, cabinets and, in fact, just about everything a couple would want in a home.