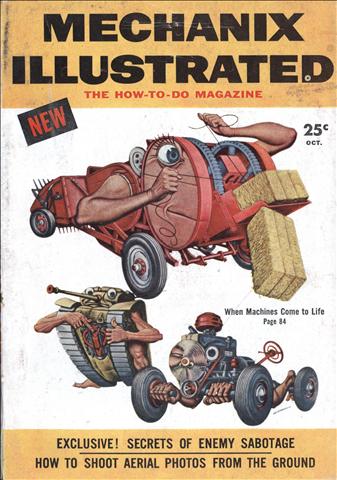 Favorite tunes and tropical fish can be enjoyed at the same time when you build this novel combination unit. By Colin J. Creitz YOU'LL hear many pleasing comments from friends and neighbors when you invite them over to see this unusual looking phonograph-aquarium with its rattan trim, Formica paneled doors, and cabinet covered with lauhala cloth.
Model Plane Masterpiece

Model Plane Masterpiece ONE of the most beautifully designed and carefully constructed model airplanes you are apt to run into in many a moon is the F-92 Black Leopard, built by young Robert F. Shaw, San Pedro, Calif. Bob, a hydraulic press operator for North American Aircraft, took five years to complete his prodigious task, […]
Milking Cows From a Swivel Chair

Milking Cows From a Swivel Chair You can just sit back and let the cows do most of the work in this modern unit. THE dream of farming by push-button came a whole lot closer to reality this year when the Hervey Research Development Corp. of Geneva, Ill., put on the market its amazingly efficient […]
Just How 'Human' Are Apes, Anyway?

From a Malayan jungle comes a strange story that may prove they're more like us than not. By Lester David A SCIENTIFIC discovery of global importance may stem from the dark and wild jungleland of Northern Malaya. Here is the bizarre series of events which led to an exciting hunt now in progress: A native workman was tapping a rubber tree on an outlying plantation a few months ago when he felt a pair of strong arms encircling his waist. Startled, he whirled around and stared squarely into the grinning face of a creature half-ape, half-human, whose lips were drawn back over protruding fangs.
NEW in SCIENCE

Nagged by associate James Densmore, Sholes made many models to improve his Type-Writer machine. By Alfred Lief IN 1863 a Wisconsin printer named Christopher Latham Sholes was appointed collector of the Port of Milwaukee by President Lincoln. It wasn't a strenuous job and Sholes had plenty of time on his hands. He spent it in a machine shop on the north side of town where he and some friends tinkered with inventions.
Mini-Cannonry

Mini-Cannonry FIVE years ago Harold Herd’s son Howard, now ten, asked his Dad if they could build a cannon at their Pasadena, Calif., home. They began making tiny models which actually fire and today they have a collection of artillery ranging from the year 1400 to the Civil War. The father-son team has been so […]
35 YEARS OF Sports Cars

Here is an over-all view of some of the cars on display in the Henry Ford Museum during the recent Sports Cars Unlimited show. In the foreground is a 1952 Ferrari 212 worth $13,000. One-of-a-kind Vega, made by Vince Gardner. Detroit. is Ford V-8 60-powered. will hit 100 mph.
KITE TAKES AERIAL PHOTOS

You don't have to hire a plane and pilot to get good air shots of ground objects. By E. J. Roy FOR many years, the idea of making photographs from a kite has been in my mind. This year, I decided to do something about it. First was the kite design, and having had considerable experience with various types of kites, I finally selected a design for a triangular box kite with wings.
TOEHOLD IN SPACE

Tiny moonlets, encircling our earth, might be used as jumping-off points for space travel. By Stanley Carson HOW many moons has the earth? If your answer is one, you may be wrong! Astronomers believe that there actually are one or several small satellites orbiting with tremendous speed between the earth and the moon. If the predictions of our astronomers are correct, and there are a number of small moons circling the earth at short distances, then space travel may become a reality many more years sooner than is anticipated. For the moonlets which our government is now searching for can be used as ready-made stations in space.
REBELS, BEAVERS AND INJUN-COLLECTORS

Are you lonely, energetic, angry, lazy, funny-looking, bored or gregarious? Don't suppress it—join a club. By Dan Valentine THERE'S an old saying that whenever three Americans get together on a street corner, they form a club and elect officers. If there isn't such an old saying, there should be, because America is club crazy. There are clubs for bald-headed men, for fat ladies, for people who like salami. There are clubs for tall girls, for people who see flying saucers, for lawyers who have been dispossessed by government agencies. There are clubs for amateur liars . . . for nudists . . .
INVENTIONS WANTED!

HIGH-SPEED SURFBOARDS, driven here by Dick McGinley and Alan Rosendahl, are actually a cross between speedboats and water-skis. Powered by outboard motors, they are used for racing. RUSSIAN MONSTER truck, called the Maz-525. weighs 25 tons and can haul a load of 35 tons. A 12-cylinder, 300-horsepower engine gives the fully-laden truck a top speed of about 18 mph.
He Brings Machines to Life

If you like these drawings, there are a bunch of his illustrations here: Boris Artzybashef He Brings Machines to Life THE transformation of harsh, cold machines into alert-looking, hard-working gremlins with faces, hands and feet is the unique achievement of cartoonist Boris Artzybasheff. His “living” mechanical monsters have created a sensation in the field of […]
Sabotage!

Here, on the next few pages, you will read the shocking but all too true story of how a little band of saboteurs, as inconspicuous as you and I, can paralyze the United States. Sabotage! By Martin Caidin IT could happen today—tonight—without warning. An attack on our country—but not necessarily with roaring jet bombers, screaming rockets and exploding atom bombs. A crippling assault without warning could be launched against our critical cities, ports, rail centers, factories, farm belts, power stations and military objectives by one of Communism's deadliest weapons—sabotage.
UPSIDE-DOWN TROLLEY

UPSIDE-DOWN TROLLEY THERE has been much talk and conjecture recently on the possibility of employing a series of elevated monorail systems to help relieve the growing traffic problem that has been plaguing our country’s highways and railroads in the past few years. Well, just in case you might be thinking that a monorail is something […]
Wheels WITHOUT Wheels

WHEELS whirred wonderingly in the fertile imagination of Greek inventor Elie Aghnides, 14 years ago, as he contemplated the bull-like tactics of a caterpillar tractor muscling dirt around in New York City's Central Park. Inventor Aghnides, best known for his Aerator water faucet attachment, was unhappy as he thought about the tremendous horsepower that was wasted by these tracked vehicles.