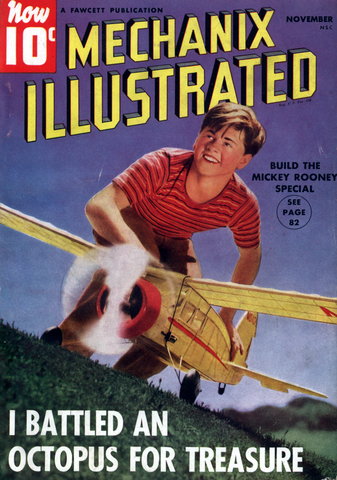 Shadowgraph Aids Judges WITH scores of beauteous contenders entered in the contest conducted to select the official Miss California during the Venice, Calif., Mardi Gras, a shadowgraph was devised to aid in judging entrants. Measurement lines were marked on a big sheet of plate glass, and when an entrant stepped into the frame, the judges […]
Bathing Suits Made Of Cork

Bathing Suits Made Of Cork BATHING suits made of cork have become the latest fad on the beaches of Italy. Designed in the most modern styles, the cork suits are not only attractive in appearance, but they also give buoyancy to the swimmer.
Grease Used For Protection

Grease Used For Protection GIRL aquaplane racers are evidently willing to sacrifice beauty for comfort, judging from the above photo. Jeanne Gilbert is shown getting a coat of grease at the hands of Babe Meneffee. well known speedboat driver who towed Jeanne’s aquaplane in a race off the Pacific coast. Other girls entered tried out […]
I Battled An OCTOPUS For Treasure

No legendary treasure was ever guarded by a more terrifying dragon than the one which the author encountered when he searched below the sea for silver bullion. by Lieut. Harry E. Rieseberg WHEN George Harding, an ex-diver, asked me to join him on a treasure salvage expedition I jumped at the opportunity. I had been laid up in John Sealy Hospital in Galveston, Texas, as a result of an accident, and upon my discharge I was eager to find any way to bolster my sadly depleted finances. Since I have long been a diver and treasure salvor, Harding's offer was practically perfect. The tale Harding told was one to whet the adventurous appetite of any man, much less one of my profession. He told me of a steel hulk, the liner Columbia of the one-time American Panama Mail Company, which was now lying in shallow waters off lower California with more than $100,000 in silver bars some place inside her.
Electricity Records Fencing Hits

Electricity Records Fencing Hits Even the ancient sport of fencing has been “wired for sound!’ Contestants in a recent match in England were equipped with trailing wires connected to an electrical apparatus that rang a bell and flashed lights when one fencer’s foil made contact with a vulnerable spot on his opponent. The idea was […]