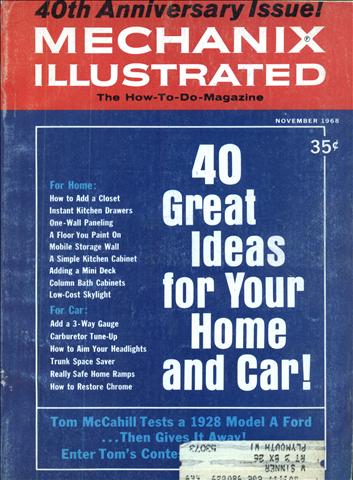 By Wayne Thorns BOEING engineers call their 747 the gee-whiz airplane. The reason: everyone who walks onto the assembly line at Everett, Wash., and sees his first 747 in shining aluminum is a cinch to utter at least one gee whiz (or its equivalent) while registering stupefaction at the craft's size. MI's author was no exception. We recently got a preview look at the world's biggest commerical passenger bird. After being appropriately overwhelmed by the aircraft's size and technical virtues we can report with some authority on what flying will be like in the Superjet era almost upon us. It's closer than most folks realize. The 747 is scheduled to be airborne in test flights this month or next, and should open its doors to as many as 490 passengers per flight in scheduled service by late 1969.
40 Years Ago

AUTHOR Donald G. Cooley with Weston Farmer was co-editor of Modern Mechanics, later to be renamed Mechanix Illustrated, when the magazine was first published in November 1928. Mr. Cooley subsequently became full-time editor of MI before embarking on a career as a free-lance writer. Today Mr. Cooley is recognized as one of the foremost medical writers in the world with a number of highly regarded books bearing his name. THE bank building in Robbinsdale, Minn., a sleepy suburb of Minneapolis, bore a sign on its brick exterior: Home of Fawcett Publicationsâ€” More than 2,000,000 Readers a Month. It was a three-story building without elevators. A long flight of stairs that reversed itself at a landing where a pert redhead ran the switchboard brought you to the third floor, an expanse that bustled, buzzed, rustled, clattered and often echoed a belly-laugh as half a hundred editors, associates and secretaries went about their business.
What Will Life Be Like in the Year 2008?

By James R. Berry IT'S 8 a.m., Tuesday, Nov. 18, 2008, and you are headed for a business appointment 300 mi. away. You slide into your sleek, two-passenger air-cushion car, press a sequence of buttons and the national traffic computer notes your destination, figures out the current traffic situation and signals your car to slide out of the garage. Hands free, you sit back and begin to read the morning paperâ€”which is flashed on a flat TV screen over the car's dashboard. Tapping a button changes the page.