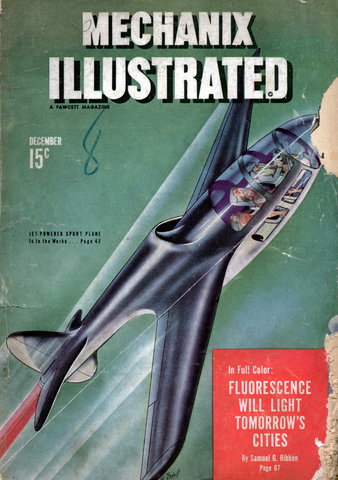 Jeepers! The lowly jeep has been glamorized in the best Hollywood tradition. The boys overseas would have to look twice before they recognized it. This gives you an idea of what can be done with the present car-of-all-work of G.I. Joe when it is painted and generally fixed up. Jeeps are going on sale now […]
RAISE YOUR OWN SILK

Here's an easy, profitable, spare time job for several million Americans that can make the U. S. world's largest silk producer. by Roger Clay HAVE you ever considered growing your wife's silk stockings at home? Well, it can be done. That is, the silk thread can be produced at home, in your spare time, at very little expenseâ€”and it will pay you a nice profit. John Ousta of New York City, a naturalized citizen of Turkish birth, with a 400-year family tradition of silk producing behind him, is convinced this country can make enough silk to meet the whole world's demands. One-third of our farming population, raising only one ounce of eggs (30,000 to 43,000 worms) regularly in their spare-time, could do it! And a silk industry on that scale would employ a quarter of a million people in reeling factories alone.
Highway "Beam" For Motorists (Very Early Proto-G.P.S)

War-born device will guide peacetime motorists unerringly to their destinations â€”or plot their course as they go along. EARLY one morning last year, just before sunrise, two men in a jeep found themselves lost in Washington. That is a horrible fate which can happen to anyone and often does, but in this case it was serious. In the back seat of the jeep was installed the first model of a secret new device which was being delivered under cover of darkness to the Army Engineer Board at Fort Belvoir, Virginia. It had to be there at 8:00 a. m. to be inspected by a full board of high Army officers. But the two men in the jeep, newcomers to Washington, were stymied.
THE KID WITH THE KAISER CONTRACT

by Dean Jennings Stanley Hiller, teen-age tycoon, casually sat down in his workshop and built the co-axial flying machine Da Vinci dreamed about. WAY back in the florid days of the Renaissance, when painters were social heroes and scientists were frequently hauled off to the clinic for nitwits, the great painter Leonardo Da Vinci invented a flying machineâ€” on paper. It would have two motors, one above the fuselage, one below, with long horizontal rotor blades revolving in opposite directions. This curious gadget was the father of all helicopters. But Da Vinci's friends said he was as nutty as a squirrel, assuming they had squirrels in those days, and the idea never got beyond the drawing board.
Chemcraft for Victory!

Dear Jack, It was swell to get your V-mail letter. Hope it won't be long before I am back home with you. I'm glad to hear that you are interested in my Chemcraft Outfit. Now I realize how important chemistry is and what a vital part it plays in our war effort. And after the war chemistry will be more important than ever. So the more you and I can learn about chemistry the better our future chances of success. Our Chemcraft Outfit will help you get a good start. So stick to it. All my love to you, Mom and Dad. Your loving brother, Dick
New Goggles of polaroid are now

New Goggles of polaroid are now being issued to Army Air Forces personnel. Like a large windshield, the single lens of shatterproof plastic provides unobstructed vision and protects against frostbite and flash fires.
FLUORESCENCE

by Samuel G. Hibben Director of Applied Lighting, Westinghouse Lamp Division. AGE-OLD mysteries of flourescence and phosphoresence are being solved today because the demands of war and the foretaste of post-war electrical living have spurred scientific research and development, formerly dormant for several generations. A great incentive has been given to extend scientific studies of this subjectâ€”generally termed "luminescence"â€”through recent developments of the practical methods of producing the chief ingredient, "black light." True, black light, which is another name for invisible ultraviolet radiations just out of range of the human eye, does exist in sunlight, but it is overcome by the much more powerful visible radiations.
THE JET PLANES ARE HERE!

THE thrilling story of how the jet-propelled plane was developed in this country in almost complete secrecy was revealed recently. The beginnings go back to 1941. In the fall of that year, the employees of the Statler Hotel in Boston were puzzled by the behavior of a mysterious English guest named Whitely. He ate his meals in his room, had a private telephone installed which did not go through the hotel switchboard, and asked that all his errands be handled by one bellboy. After a week, he left the hotel.