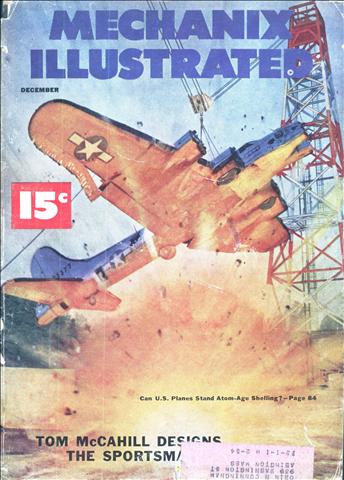 I just like the giant drinking straw. They should combine this with a Sodastream and use the CO2 for flotation. Sun Still is a 24-inch Vinylite plastic sphere which desalts ocean water and makes it drinkable. Black inner bag absorbs sun’s heat and evaporates water leaving salt residue. Vapors condense as fresh water in reservoir […]
Bull Blinkers

Bull Blinkers keep Joe the Hereford from charging through fences in response to amorous glances from cows in the next pasture. Clifford Houp of Hagerstown, Md., who owns Joe, came up with the idea. Now his bull can look down to eat, but can’t see those fluttering bovine eyelashes nearby.
Santa Claus In Disguise

That lonely, ragged old man dressed in castoff clothing may well turn out to be an eccentric millionaire. By Harry Kursh AS the full car rattled down the beach . road, a shabby old man stepped aside to let it pass. He looked longingly at the . happy young faces inside anticipating a day of fun at the beach. Suddenly, the car stopped. There was a hurried conference among the occupants before the father of the group leaned out of the window. "Sir," he asked respectfully, "would you care to join our family at the beach? We have room."
For Men Only

Insurance against laughicide is all in the day's business for these Mad Hatters of the comic greeting-card industry. By Edward Dembitz "WHY don't you write?" the card asks tenderly. "Is your hand broken?" You lift the cover and, wham, a miniature metal bear-trap clamps down on your finger! "Well, now it is!" jeers the caption. "Now you've got a real excuse for not writing." If this card kills you, don't worry about it. The Barker Greeting Card Company of Cincinnati even has that one figured outâ€” they've taken out an insurance policy which pays $10,000 to the heirs of anyone who laughs himself to death over one of their products.
FOR THE KIDDIES

Man-made satellite rocketships may soon revolve in endless orbits around the earth, policing our civilization. By Frank Tinsley NATIONS of the world are racing to send the first man-made satellite revolving in an endless orbit around the earth. In the hands of an agressor, such a machine might mean slavery for all mankind, but as a police unit of the United Nations, it holds a promise of world peace. Back in the closing days of 1948, when Secretary of Defense James Forrestal disclosed the existence of an "earth satellite vehicle program," the press and public reacted with a gasp of incredulous amazement. For the first time, responsible officials had dared to admit that they were seriously investigating the fantastic dreams of Sunday-supplement screwballs!
Home on a Train

SOME hobbyists let their hobby occupy them night and day. Well, the reverse is true of Dr. John Payne Roberts. He occupies his hobby! For Dr. Roberts and his wife make their home in an old railroad car which is a prize exhibit of the Museum of Transport, located in Kirkwood, on the western outskirts of St. Louis. The Museum contains a remarkable collection of old railroad equipment.