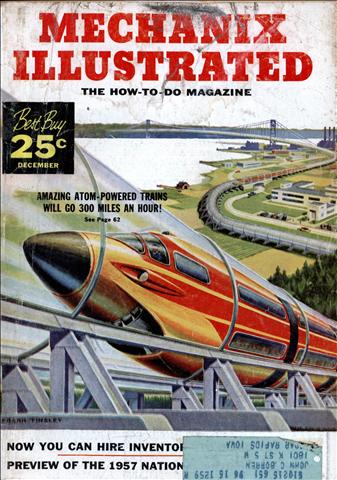 ARMY "MULE," new four-cylinder cousin of famous Jeep, is first military vehicle to carry load greater than its own weight. It can climb 72 per cent slope on rough terrain. FRENCH STYLE taxi hailer will help do away with noise in Paris. City fathers are trying to quell unnecessary bedlam. GOGGOMOBIL is tiny new four-seat, rear-engined German rig which gets claimed 61.4 miles to gallon, 60 mph top speed.
THEIR Brains Can Make YOU Rich

You can turn that idea of yours into dollars with the aid of private research laboratories. By Lester David THE MAN in the chair watched the barber come away from the electric lathering machine with a fistful of creamy stuff. He had watched this process dozens of times while he was being shaved or getting a haircut. It was just a gadget which makes lather and you can see it in any barber shop in the country.
The Weather Can Change Your Life

By Allen Bernard ARE YOU shorter than other people? Do you suffer ill health? Are you in jail? Are you nervous? Sterile? Unsuccessful in business? The weather may be to blame! From conception to death, scientists say, we are all puppets of the weather. It manipulates us physically, mentally and emotionally; it has a decided influence upon our birth, growth, health, life span, work and behavior.
The Fuel-Injection CORVETTE

Chevy leads the way with a fuel injection system that may enable this buggy to beat the Grand Prix record of 170 mph, says Tom, By Tom McCahill IN 1920, when a be-mustached gentleman named Gaston Chevrolet won the Indianapolis classic at the astounding speed of 88 mph, he was a hero's hero and about as swashbuckling a character as you would be apt to meet at a luncheon for the late Jean LaFitte. Later on, Gaston zigged when he should have zagged and they buried him that November. Somehow I can't help wondering how Gaston would have reacted if he could get a look-see at his namesake as we know it today.
Clink, Clink, Clink Goes the Trolly

Jack Francis' whimsical kiddie trolly is clanging along to the tune of merry dollars. JACK FRANCIS is a dreamer who follows up an idea by saying: "Let's try it." Optimistic as he is, even Francis thought his idea for a kids' trolly was a bit zany. While he rode around on his motorcycle, doing his job as a traffic officer for the city of Oakland, Calif., he kept thinking about building a little trolly car. In his work with traffic safety, Francis had plenty of experience with youngsters. He loves children and, with the trolly car scheme he had in mind, he thought he had something that would make them happy. But he had three problems: no money to build it, no place to operate it, and no time to undertake such a project.
WHEN LIZARDS RULED THE WORLD

Double-Spiral Corkscrew DRAWING the cork from a bottle of imported wine is often a losing battle. Bottles of wine should be stored on their sides to keep the cork wet and pullable. But on the long voyage from the vineyards of Europe to your table, the cork often dries out. Then you’re likely to end […]
A-POWERED TRAINS IN GLASS TUBES

They'll give airliner speeds plus weather-free reliability. By Frank Tinsley THE train of the future, whipping passengers vast distances through continent-girdling tubes at speeds and in comfort far surpassing that of modern air travel, is no longer merely a dream in the minds of our more imaginative designers and engineers. This old idea (New York's first working subway train was sucked through a tube) has been brought well within the realm of probability—and the hero of this advance is, as has so often been the case in the history of technology, a new material.