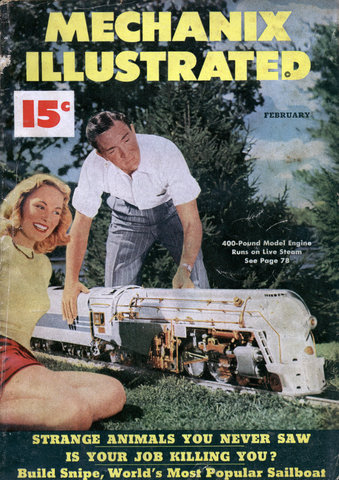 MI's correspondent visits a fantastic land of precious jewels in South-West Africa. By Henry Albert Phillips WARNING! You are approaching diamondiferous territory. TURN BACK! Trespassers are liable to suffer bodily harm, a fine of 500 pounds or five years in gaol. De Beers Consolidated, Ltd. THAT'S the sign which greeted me a couple of miles outside of Luderitz in South-West Africa. Inside the ominous -looking gates was the diamond country— soil and sand laden with precious gems like almonds in a Hershey bar. I had imagined what the land of diamonds was like and I was about to see for myself at last.
MAGNETIC SOAP HOLDER

EVERY time Urey Edger of Louisville, Ky., washed his face he got n trouble. Not bad troubleâ€”nobody was killed or clapped behind bars. But trouble enough to make him squeeze up his face tight, hop blindly around the washbasin and holler for a towel, to wipe that stinging soap out of his eyes. Urey noticed a messy jelly in his soap dish and thought that some of his soft-soap goo might be smearing into his eyes and causing his face-washing woe.
Squirrel Cage for Jeeps

How exactly does one turn with this thing? Squirrel Cage for jeeps is this new device for travel over swamps, bogs, soft beaches and heavy underbrush. It’s a continuous road matting on rollers which runs around the body and under the wheels. The Marine Corps is testing it at the Quantico, Virginia, base.
How Radar Sentries Will Guard America

How Radar Sentries Will Guard America With a centrally controlled network like this, says the author, we could insure ourselves against an atom war Pearl Harbor. By Frank Tinsley ELECTRONIC watchdogs may save you from atomic destruction! Just one sneak atom-bomb attack on a single target city would cost thousands of American lives and millions of dollars in vital property. Our only guarantee against such an atomic catastrophe is the creation of a system of overlapping search radars to warn us against approaching disaster. The advent of 1000-mph raiders and long-range guided missiles cuts the margin of precious warning time. Our sentries must be posted far afield or the confusion caused by large numbers of missiles launched simultaneously could cause a breakdown just as the British spotting system was disrupted by V-2 attacks during World War II.
Roto-Chute for Rocket Pilots

Roto-Chute for Rocket Pilots SUICIDE is the word for the pilot who tries to escape from a supersonic plane by parachute. The billowing fabric ‘chute was -a wonderful aerial lifesaver â€”till Air Force pilots started streaking faster than sound in rocket planes like the Bell XS-1. The impact of the air at such speeds is […]
Are Scientists Monsters?

"Lord, what has happened to people's thinking!" writes a Mr. R. C. C. of San Francisco, telling us how "shocked" he was to read artist-writer Frank Tinsley's article, Atomic Duster . . . Deadliest Weapon, in the December issue. Quoting Mr. Tinsley's statement that his atomic-powered, ramjet missile (see cut) is not pure dream dust but that such a weapon is mentioned in the latest progress report of the hush-hush Nuclear Energy for Propulsion of Aircraft project, the reader asks: "How can a man have such a perverted mind as to call a weapon designed for wholesale cold-blooded murder progress? What right has science to create and release such forces under the guise of progress and jeopardize the life of every living thing?"
Wallpaper For Picture Backgrounds

Nothing interesting, I just thought the picture was great. Wallpaper For Picture Backgrounds WALLPAPER is inexpensive, colorful, and picturesqueâ€”in short, it is ideal as a background for portraits, still life and table-top set-ups. It is best used when mounted on rolls. Use cardboard tubing of fairly large diameter, not less than 2 in. across. Short […]
Hair Mail Special

Hair Mail Special Baldness beating you down? Don’t lose your headâ€”mail-order a scalp from Max Factor, movie makeup manâ€”and brush your troubles away! Bashful about that shining pate for years. Milton Jones gets mail kit to order hair. Following Max Factor’s instruction booklet, Milton x-marks a spot for his new hairline. Then he stretches a […]
Do Prehistoric Monsters Still Exist?

Future explorers may find themselves battling "extinct" creatures which lurk in the remote corners of the world. By Willy Ley Author of The Lungfish, the Dodo and the Unicorn* DINOSAURS may roam the unexplored jungles of Africa! Native tribes near the Congo River call the creatures Mokele Mbembe. They say they're enormous and live in caves washed out by the river at sharp turns. Some startled tribesmen have described them as having long necks, small heads and one long tusk. Others have told of a three-horned monster like that shown above, with ferocious teeth and a massive comb. All agree that the creatures kill both humans and elephants. But they never eat the flesh. Farther east in Africa, near Lake Ban-gweolo, the natives tell of a weird animal which they call Chipekwe. Because it kills hippopotamuses, not one hippo can be found in the lake. One tribe claims it hunted and killed a Chipekwe forty years ago. The strongest hunters had to jab it with their spears for days before the animal finally succumbed.
Most Dangerous Job? (Bullet Proof Vest Tester)

Most Dangerous Job? “I’d rather be shot at than do the shooting/’ says Leo Krouse. 58-year-old New Yorker, who faces police firing squads to demonstrate a new 14-lb. bulletproof vest for the Spooner Armor Co. “The shooter’s really the one on the spotâ€”not me. He has to make sure he hits the armor.” Slugs spot […]
Is Your Job Killing You?

A desk can be deadlier than the daring life on a flying trapezeâ€” if a secret urge is making you literally work yourself to death. By Donald G. Cooley ALFRED Rhodes, professional stunt man, contemplated the fact that nobody had jumped off the Golden Gate Bridge and survived. So he decided it was up to him to be the first to leap and live. All in the day's work, he figured. He planned the job with meticulous care. Main problem, he reasoned, was to hit feet first and knife cleanly into the water. He rigged up a baby parachute to keep himself from flopping over during the fall and protected his body with a special padded rubber suit. He waved to the crowd on the bridge, then calmly stepped over the side. The little white 'chute opened neatly. From the height of the bridge nothing looked more dangerous than that 200-foot drop. And nothing was. His body turned despite the 'chute and he hit the water flat on his face. Rhodes' job did kill him. But most dangerous jobs actually are a lot safer than they look.
Sked