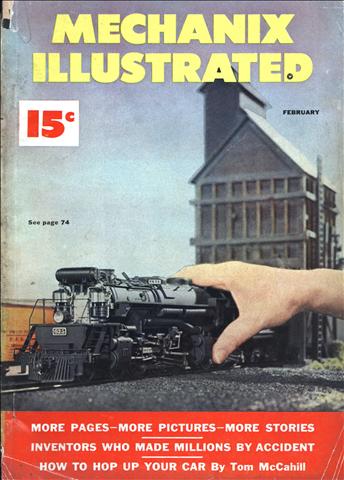 A CAREER that embraces acting, diplomatic missions and gallant war service, might well be termed colorful. Not resplendent enough for Douglas Fairbanks, Jr., though. He finds relaxation from his daily work in a collection of diminutive fighting men—3000 of them which he likes to prod into battle and parade positions. They fill four shelves in a special showroom in his Hollywood home.
QUICK-FREEZE HUMAN LIFE?

By Morrison Colladay EVEN though our universe has been criss-crossed and catalogued for hundreds of years, there still remains a country unknown to science. It's a place where there's an entire absence of heat—a spot called "Absolute Zero!"
Colorvision's Colorful Genius

Dr. Peter Goldmark, CBS's engineering wizard, is always dreaming up a revolutionary invention—whether it's color TV or 3 "mad" Russians. By Leonard Reed THE Columbia Broadcasting Company has on its payroll an amazing genius who could figure out a practical system of interplanetary travel—if he didn't divert so much of his talent to plotting new practical jokes. His colleagues give Dr. Peter C. Gold-mark, Columbia's director of Engineering, Research and Development, sole credit for developing color television. A long-range problem, you think? Dr. Goldmark first began to think seriously about "colorvision" while he was watching the movie, Gone With the Wind. Before Rhett Butler finally had given Scarlett O'Hara the heave-ho, Goldmark had worked out the solution to color TV.
NEW on the ROAD

Autoliner may some day cross oceans, according to Karle Moench of Berlin, Germany. This is a small version of a sea-going car which operates on the road, left, or in the water, right, with equal efficiency. Note the fin-like tail on the amphibious vehicle. Moench plans to visit the U. S. but won't say whether or not he'll risk the long-distance trip in his own strange craft. Autocycle is a motorcycle that worked its way up. Cyclist August Paul got tired of shouting to his wife in the open sidecar every time he had something to say. So, being a mechanic, he went to work and developed a deluxe convertible sidecar. He liked it so well that he added a steering wheel, gear shift and other controls, threw away the saddle and now rides about in it himself, too.
INVENTORS BY ACCIDENT

A mishap can make you a millionaireâ€” if you're alert enough to recognize a million-dollar idea when it hits you. By Robert Cutler WOULD you recognize a million-dollar idea if you fell over it? More than one man owes his good fortune to an accident â€”plus his own ability to learn and profit from it. Many inventions we enjoy today are the direct results of mishaps that have made their "victims" rich. With Harry Waters of St. Louis, though, it was not one accident but a whole series that brought him a fortune. First, a stenographer in his office spilled a glass of water on him. Due for an appointment, Waters had to get a quick pressing jobâ€”not quick enough, however, to prevent his being late. So he had to take a taxi, even though he was nearly broke and desperate for money.
Can Russia Defeat Us With Atom Bombs?

Assuming that the Reds have enough A-bombs and the planes to deliver themâ€”could they blast us into military, social and economic chaos by a sneak bombing attack on certain key American cities? By Ralph Coniston "THIS is WQZ, your favorite local station for music and news, bringing you a noonday program of recorded hit tunes. The first number on today's show will be. ... "Just one moment, please. Here's an important bulletin from our newsroom, just handed me. It's date-lined Washington, D. C. "A terrific explosion has just wrecked downtown Washington. The blast, of unknown origin, seems to have damaged communication lines out of the city. "I can't tell you any more because there is no more to the bulletin. So, until further news comes in we'll return to our.