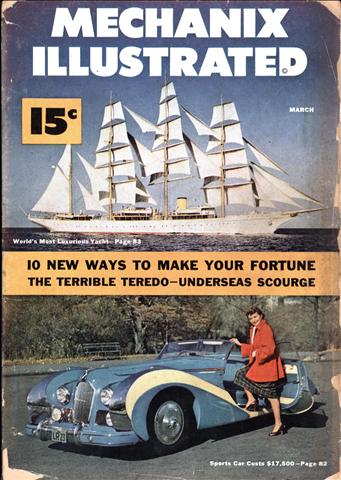 De-icing Fluid clears sleet and frost from your windshield. You just squeeze the flexible Bakelite atomizer and the liquid is forced out in a fine spray. It turns frost into slush which your windshield wiper can quickly clear away. Birma Mfg. Company, Buffalo 14, New York.
Last of the Big Yachts

DURING the last generation every self-respecting millionaire in the land owned a yacht on which to entertain and sometimes even to cruise. Confronted 20 years ago with rising taxes and costs, the majority were quick to get rid of their boats.
King Coal's Sculptor

By H. W. Kellick A dirty hunk of coal is the last place where you'd look for beauty. But every day Charles Cunningham of Summit Hill, Pennsylvania, conjures beautiful animals, art objects or busts of famous people out of ugly lumps of anthracite. To work this black magic, Cunningham goes down into the mine himself to pick out his own pieces of coal. Back in his home shop, he splits a big hunk with hammer and chisel to the size he wants for his new creation. Then he carefully chips and carves this piece into shape. Just how he gets the mirror-like surface that marks his masterpieces, though, is one magic rite he won't reveal.
SCRANTON HOBBY CENTER

DR. Willis Whitney, honorary vice-president of the General Electric Co., formerly in charge of research, blames his curiosity for making him one of the nation's top scientists. That desire to investigate extends also to his leisure moments —which he devotes to turtles. As a young man, some 50 years ago, Dr. Whitney gave up a teaching career at M. I. T. to plunge into industrial research which was then in swaddling clothes. He and Dr. Steinmetz, of engineering fame, set up a research laboratory for G. E. in a barn. Under Dr. Whitney's admirable leadership, the lab grew from an infant into today's giant. Through the years hundreds of first-rate scientists working under his guidance have discovered, improved and perfected inventions ranging from the incandescent lamp to jet engines.
NEW in SCIENCE

Cosmic Lab is 2250 feet under the shores of Lake Cayuga near Ithaca, N.Y. Here, Lowell M. Bollinger, Cornell University scientist, checks a geiger counter he has installed to study cosmic ray particles which smash deep into the earth from outer space. The laboratory is located in an abandoned salt mine which was tunneled Far under the lake's surface.
Let's Give Inventors a Break

Here's the exclusive story of the newest organization for gadgeteers—the National Society for Inventors—told by group's executive secretary. By Col. Paul E. Holbrook TWENTY years ago I thought of a bright idea for a direction-signaling device for trucks. The first thing I did was write to the chief engineer of one of the largest auto manufacturers. His reply was fast and to the point. "No, thanks," he wrote, "we aren't planning to add any automobile accessories this year." So, I wrote to another industrial executive—an official of a speedometer corporation. He said it was a swell idea all right but it had no commercial value unless such a device were required by law.
10 New Ways To Make Your Fortune

If you want to stay broke all your life, better skip this. For here's the secret of making money—and you might dash off and strike it rich! By Lester David EVER want to make $100,000 a year? With a little brains, a little know-how and a novel idea, you can. You don't have to bundle your head up in a big bath towel and make like a crystal-gazing swami with your goldfish bowl to discover the secret of rolling in coin. All you have to do is to put a new idea to work in a business of your own. Just give your community something different—something it needs or something you can make it want.
Vest-Pocket Life Preserver

DURING many an over-ocean, wartime flight as service inspector of B-24s in the China-Burma-India theater, Engineer Bill Baker's thoughts of home kept reverting to a time when he. and his sister were lake sailing and their boat capsized, pinning the girl under the sail. Both escaped—but from then on his sister's love for sail-boating was spoiled by her fear of the water.
SURE - Pro Wrestling is Honest!

It's as honest as any other legitimate show on Broadway— and what's more, doesn't claim to be anything else! But it's still killing the reputation of amateur wrestling. By Clive Howard A GROUP of prominent amateur wrestlers was trying to place wrestling on the sports program of New York City high schools. Arrangements were made for the members to be heard by a special committee of educators and the prospects looked good. But when the final meeting came about and the topic was broached, the head of the school committee threw up his hands in horror. "Wrestling? Never!" he exclaimed. "We've seen that on television!"
Wild West in Miniature

Wild West in Miniature 1. The stagecoach is here! And for keeps, thanks to Mary Crouch who has carved a tiny western town out of wood. Three years of research went into the project. 2. Mrs. Crouch’s son and helper. Worth, envies the rough but colorful life of the frontiersmen who enliven the realistic village […]
Self-Answering Telephone Thinks and Talks

By Harry Kursh "HELLO, hello. This is the residence of Mr. John Smith. Your message is being recorded automatically. Ready! Please speak now." Don't be surprised if that's what you hear one of these days when you dial the familiar number of one of your friends. For Ipsophone—the robot telephone device with a brain—has been placed on the market and is rapidly coming into use all over the world. Three of these ingenious Swiss inventions have already been installed for the King of Egypt but their cost ($38 per month) will make them practical for even the smallest businessman.
NEW for the ZOO

Lemur, rarely seen in this country, was adopted by Harf Hoogstraal on recent expedition into Madagascar. Monkey-like creature has 14-inch tail, drinks beer and champagne, will aid medical research. $2500 Pig is no common variety of pork-on-the-hoof; he'll be going Hollywood, soon. Porky is four years old and was born with only two legs, but he has learned to use them well. Piggie's sponsor is a California carnival man, Charles Simpson.
$17,500 Sports Car

STANLEY Hiller, Jr., isn't satisfied with his helicopters. He has his sights set on a star. Literally, that is. And if he has his way, he's going to get to that star in a machine of his own make, a man-carrying rocket which he calls the VJ-100. The present model uses a combination of jet and rocket power and looks like a V-2 with wings. It is designed to take off straight upward, powered by a Rolls Royce Nene turbo-jet engine and 5,000 lbs. of rocket thrust. Later conversions will make use of rocket power alone to drive the VJ-100 away from the earth's gravity on its interplanetary explorations.
We Shoot Newborn Babies

by Robert Clark WHEN I wound up my war service in the Navy five years ago, I thought all my "shooting" days were over. But now Bob Danielson and I are scrambling about like second louies on a recruiting tour rounding up a corps of expert marksmen to patrol hospitals all across America— and shoot newborn babies! Who's this talking—Public Enemy No. 1? No—not even No. 101. Strangely enough everyone likes having us around—doctors, nurses, parents by the thousands—even the cute little tykes themselves. And our shooting is done not with a bang-bang but with the click-click of cameras formerly installed in the wings of Navy Hellcat fighters to record split-second combat maneuvers.