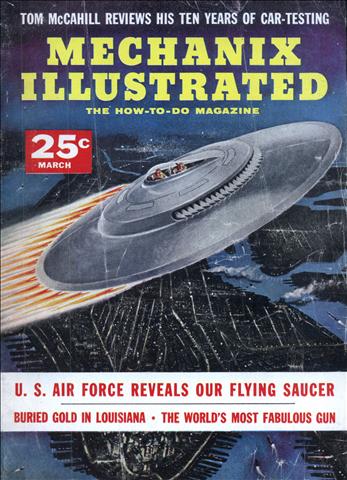 CIG-O-MAT A NOBBY novelty copped this month’s $50 Bright Idea Award. Called the Cig-O-Mat, it’s a miniature cigarette vending machine that looks just like the big jobs that dispense smokes for those who like the puffers. Made of heavy chrome, it is an eyecatching little item for your home or office. It holds nearly two […]
CIRCUS ON THE CAMPUS

The big show at Florida State U. is all part of this school's "High Flying" curriculum. GO TO college and join the circus. That's what collegians at Florida State University in Tallahassee do at the only school in the land where students can learn the circus profession for credits!
IS THE PILOT OBSOLETE?

Missiles and rockets guided by "machines that think" are already in the air. Do our fantastic plans for tomorrow doom all piloted aifcraft? By R. C. Sebold, Vice President of Engineering, Convair, As told to B. W. Von Block THE war of the future? Giant intercontinental missiles hurtle through space at 10,000 miles an hour —untouched by human hands. Pushbuttons send a screen of supersonic interceptor missiles streaking skyward to blast the attackers to bits with atomic warheads. . . This is what you read in Sunday supplements. Tomorrow, say the aeronautical crystal gazers, the only humans left in the skies will be passengers. Not only fighters and bombers will be controlled by electronic brains, but so will commercial passenger and cargo transports. The pilot, these pundits claim, just isn't stylish anymore.
Looking for Louisiana's Lost Loot

Legends are many of the Bayou state's buried treasure but facts prove it's there, waiting to be taken out. By William L. Rivers THERE are so many legends of buried gold in Louisiana that it would seem all the would-be treasure hunter had to do was pick up a shovel and start to dig. Sadly enough all these tales aren't true. If they were, there wouldn't be room beneath the Bayou State for much else. But the encouraging fact is that at least some of the many buried treasure tales are fact. Perhaps 30 all told. The problem is which 30 are worth investigating?
THE GUN THAT REFUSED TO DIE

Peacemaker of the West, the famous single-action Colt .45 has made a terrific comeback. By Robert Hertzberg THE GUN that refused to die" is a Colt single-action Army revolver, also known as the "Peacemaker," the "Frontier," the "Equalizer" and the "Thumb Buster." During the great Western trek that followed the War Between the States, it was as much a part of a man's clothing as his pants and boots. Simple, rugged and reliable, the single-action was designed for one grim purpose: to knock out another armed man with blood in his eye and maybe too much raw whiskey in his gullet. The Colt was equal to the job.
How's This For Luxury?

How’s This For Luxury? This Englishman’s car is literally his castleâ€” a plush, sumptuous $14,000 dream on wheels. PLUSH seems a woefully inadequate word to describe the Bentley Countryman Saloon, the fabulously luxurious auto owned by Mr. A. Walker of Watchers, Hastemere, Surrey, England, With whom Uncle Tom is shown in the photo above. The […]
ANTIQUE JUKE BOXES

ANTIQUE JUKE BOXES A rare find in a dusty attic led to Louis Kernstein’s role as an expert on old music machines. TWENTY-FIVE years ago, Louis Kernstein found an old, dusty victrola in the attic of his family home in Freehold, N. J. The machine was in sad need of repair and Louis scoured his […]
Martian Invader

Is it a bird? Is it a plane? No, it's MPs interplanetary space traveler. By Walter A. Musciano HERE is a model that can truly be described as being "out of this world." The Mechanix Illustrated Martian Invader, a flying saucer, is a most unusual control line model airplane patterned along the lines of those luminous disks that thousands of people have seen during the past several years. The twin bubble canopies housing the Martian pilot and his robot and the rakish fins add to the futuristic appearance of our saucer.
Why Don't We Build An Atoms-For-Peace Dirigible

Here is a bold plan for displaying peacetime uses of the atom to the peoples of the world. By Frank Tinsley EARLY last year, President Eisenhower asked the Congress for funds with which to build a fission-powered merchant ship for the global spread of peaceful atomic knowledge. "Visiting the ports of the world," the President stated, "the ship will demonstrate to people everywhere the peacetime use of atomic energy, harnessed for the improvement of human living." In Washington, the basic idea of a floating exhibit of American fission techniques was received with general approval by members of the Congress. Some of the plan's technical aspects, however, generated a bit of discussion. To avoid protracted experimental research and thus speed the ship launching date, it was originally decided to fit the vessel with a duplicate of the power plant used in the atomic submarine Nautilus.
MY TEN YEARS OF CAR-TESTING

Here are the fabulous hits and the colossal flops of Uncle Tom's first decade as America's "Mr. Car Test." By Tom McCahill LAST MONTH we completed ten years of car-testing. More than 250 tests ago, in the February 1946 issue, Mechanix Illustrated published the first automobile test articles ever seen in America. Selling this series was tougher than trying to juggle pyramids as no other publication had ever had the guts to write both the good and the bad about Detroit. Since we started this controversial hassel, imitators have risen up like, mosquitoes in a tropical swamp and more guys have stolen our car-testing idea than you could find in all the Federal pens.
IT'S NEW!

If you haven't seen saucers yet, you willâ€”and they'll be built to Air Force specifications. By Willy Ley Editor's Note: Ever since 1950 when TRUE The Man's Magazine discussed existence of flying saucers, the world press has been continuously interested in the flight possibilities of disc-shaped aircraft. The most recent Air Force report on flying saucers, issued in November 1955, states that there are rational explanations for practically all the so-called flying saucer "spottings." Most interesting portion of the Air Force report to many readers, however, was the section dealing with America's plans for building a disc-shaped aircraft capable of vertical flight and easy maneuverability. To bring you more details on exactly how such a craft would operate, we have asked the world-famed authority on rockets and guided missiles, Willy Ley, to visualize for us how the craft now under development for the U.S. Air Force might be constructed in the light of what is now known about jet propulsion and vertical flight. Mr. Ley's observations are based on conversations with VTO authorities in the U.S. and on a lifetime of research in jet propulsion and rocket-powered flight.
The One-Man Telephone System

The one-man telephone system for his town's 370 party-line patrons. BOB WILCOX, President of Inland Telephone Company of Caledonia, Mo., a tiny hamlet with only 370 party-line customers, can be found almost any day atop a pole fixing a wire. No deskbound executive, Wilcox is also business manager, maintenance man, installation and repair man and part-time switch-board operator.
Early UAV's