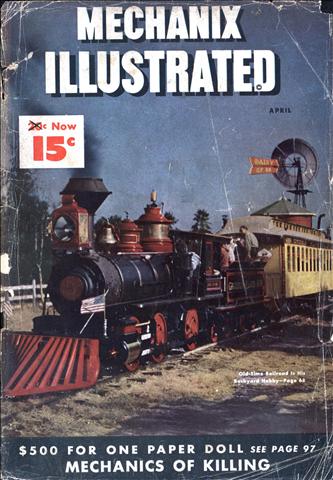 I really like the glossy saturated color printing they used in the mid-40’s. Scale-Model Farm LEOPOLD ARMBRUSTER, recovering from a leg ailment, found he was a top-flight miniaturist. He laid a board on his lap (for a bench) and started whittling out a farm building. His fingers flew. His farm grew. In six months it […]
Escape Chute

Escape Chute can evacuate the entire 136-bed Georgia Baptist Hospital, Atlanta, in only a few minutes. In case of fire, patients can be picked up, mattress and all, and slid to safety down the spiral chute.
Old-Time Railroad is His Backyard Hobby

By John Edwin Hogg ON Ardendale Road, north of San Gabriel, California, passing motorists are treated to a sight which makes them stare, blink their eyes, and then stare again. Puffing through the orange groves they see a ghost of the past. It is the locomotive, "Sidney Dillon," gaudily painted and guilded relic of one of the most romantic eras in railroading's history.
new on the road

Parking Gage sounds a buzzer when you back too close to the curb. Hub caps and tire walls are protected by two, six-inch springs which close circuit when they touch curb. Puncture-Proof Tire has nails, ice picks and a chisel driven into it to prove its toughness. Chicago police also riddled it with bullets with no effect. This tire can take it.
Jet Iceboat

ROCKET specialists have developed what is probably the first piloted rocket-powered iceboat ever to undergo successful tests. It resulted from a unique spare-time project carried out by Test Department personnel at Reaction Motors, Inc., Dover, New Jersey. With an eye on cracking the world's record of about 130 mph for powered iceboats, the men constructed a craft unlike any that has ever existed before.
THE BASEBALL - A Precision Product

IF YOU'RE a big league slugger and "hot," you may loop that baseball against the stands, burn it over third base or sock it out of the park. But hot or cold, you still won't "knock the cover off." For the baseball is a precision product, solidly designed by fine workmanship to take the hardest swat. The official baseball's core is made of topgrade cork and rubber carefully cushioned in three windings of wool and a binding of cotton.
Ancient Wind Instruments

HISTORY of the horn is almost as ancient as the history of man. First wind instrument probably was a spiral shell picked up by early man in his search for food along the shore. The Greeks had a myth for it—demigod Triton blowing on a conch shell as a trumpet to whip up or calm the waves.
Visible incubator

Though his plan for a mass market chicken rotisserie was a failure, Katay found that replacing the chickens with little wooden soccer men made for a delightful game. Which he promptly named after his (now-ex) girlfriend Foos. Visible incubator gives you a look at baby chicks hatching. All phases of birth from first peck at […]
Electric Mask

Electric Mask is just what the doctor ordered for sinus pains, colds, facial neuralgia and headaches. It covers the front of the head and cheeks. Just plug it into a wall socket.
Food-Not To Be Eaten

FEAST your eyes on that gorgeous display of sharp, tongue-teasing cheese; smack your lips at the lush ripe fruit, the mellow-spiced hot ham. Melt your mouth with a long look, but don't try a quick bite—-you'll crack your teeth! The beauty in this banquet is only paint- deep. It's all art for the eye—not food for eating. But that art saves real food from waste in those elaborate dinners on stage and screen and in fancy displays.
Rocket Train Faster than Sound

TOMORROW'S train will be too fast for a timetable. Leave New York at 12 noon for the coast, and you'll arrive in Los Angeles at the same time, the same day! How's that? At 1,000-mph your train will travel as fast as the sun in its apparent motion across the earth from east to west. You'll pace the sun through every time zone from Eastern Standard to Pacific Time as your wheel-less train glides across the continent in three hours on its graphite-lubricated slippers. It'll take the sun three hours to race the same distance, and you'll flash into L.A. in a dead heat—at the same time you started!
Radio Camera

Radio Camera outfit lets the photo-minded girl snap a picture without missing her favorite radio show. It weighs less than 4 pounds, is 9-1/2 inches high.
new for the home

UTILITY and beauty in modern styling for your home are in evidence in the new furniture shown on this page. They are a part of the Chicago Furniture Mart show held recently. The old problem of what to do with your extra table leaves when not in use has been studied by furniture designers. The result is the modern buffet shown in Picture No. 1 which provides storage space. Just slide the leaves under as the girl is doing. If you like variety in your furniture, the sectional sofa in No. 2 has a versatile quality you'll enjoy. It can be taken apart and reassembled in a wide variety of pieces. The girls are shown busily making a chaise longue out of an occasional chair.
$500 FOR ONE PAPER DOLL

Jack Eisner might make you a doll for $200, but his regular price is more, and his customers keep him very, very busy. BY Louis Hochman SOUNDS silly for a man to spend his time cutting out paper dolls. Stuff for kids and crazy people. But it's silly like a gold mine for Jack Eisner of Kew Gardens, Long Island. He cuts out paper dolls and sells them for $500 apiece. His first paper doll was a caricature of Jack Oakie, the film comedian. Eisner admits it was pretty crude, but it impressed the art director at Paramount Pictures. "You've got something there," the art director told Eisner and doled out twelve whole dollars for his paper doodle. That was Eisner's first paper profit. Since then, he has bettered both his technique and his income. Now he gets from $200 to $500 for a single caricature.
Mechanics of Killing

From the first torture rack to the latest gas chamber, science has transformed the criminal's execution from a human butchery into a skilled profession. BY Lester David WHEN the world was younger, the law's method of exacting an eye for an eye and a life for a life was crude. Today the mechanics of executions have been made both deadly and scientific. Not so always! In ancient Rome a condemned man, clad only in a loin cloth, was shoved by his executioner into a large sack. Into the sack also was placed a dog, a rooster and a poisonous snake. The writhing bundle was hurled into a swamp, and the execution had been carried out.
Hearing-Aid Radio

Hearing-Aid Radio This tiny radio adapter plugs into the side of a hearing aid, and now people who wear these gadgets have an advantage over their friends who hear normally. They can tune into their favorite program whenever they desire.
The Golden Hamster

These little rodent breed four times as fast us guinea pigs, can contract more human diseases than any other animal. No wonder scientists are excited — BY WILFRED WEISS A DOCTOR in Fort Worth, Texas, is having a feud with his nurse over a pair of Golden Hamsters he bought for laboratory experiments. She argues that the friendly little beasts are too cute, and won't give them up for any lab work. But the doctor is fascinated by the unique laboratory value of the creatures and insists that they be sacrificed for science.
Invasion Base on the Moon

"The first nation to establish a lunar military outpost will rule the earth" says Willy Ley, expert in rocket research. THE man in the moon may plot the attack that will open World War III. For the man in the moon will be a powerful "spy in the sky" rocketed to the earth's satellite by the aggressor nation to prepare the way for an all-out assault to conquer the world. Soon after a 20th-century Columbus pilots his rocket to the moon, the nation that sent him there will have a lunar base that will expose any spot on earth to celestial spying and sudden rocket invasion.
Radar Ignites Flash Bulbs in Aircraft

Flashbulbs and aircraft like liquor and automobiles, don't mix. Enroute from Los Angeles to New York, fire broke out in the baggage compartment of a DC-6. The pilot tried for an emergency landing but just missed the strip and crashed in Bryce Canyon, Utah.
Robot Production Line Makes 3 Radios a Minute

THE so-called "printed" radio sets are still new on the American scene, but they are rapidly becoming common items in England. A new factory near London is using a robot machine (above) which takes the plastic molding in one end and delivers the printed circuits from the other end at the rate of three a minute. It would take about 2,000 workers to do the same job by hand.
Sea-Going Diner Pays No Taxes

BY TOM MCCAHILL SAILORMEN of New York waters don't die of thirst any- more, thanks to a new enterprise that pays no rent and no local taxes. No, sir. When they're a little parched they twist an ear until they pick up a few musical horn-toots. Then they jump up and wave their arms. A slick cruiser draws alongside. "What'll you have?" asks a smiling cookie.
it's a RAT RACE!

HIGH prices, hard scrambling for the daily dollar got you hectic? Life may be a real rat race for you, but rat racing is just the life for Edward Moffitt of San Francisco. He lines up six favorites from his unique stable of 80 albino racing rats and adjusts the dials on his mechanical racetrack. Bong! There's the starting bell.
Robot Turns Actor and plays

Robot Turns Actor and plays the role of a ”Martian” in a French production. Built by M. Koralek, noted French engineer, the 500-pound robot is seen at the left “rehearsing” with actress Mag Villars. At right. M. Koralek adjusts the robot’s mechanical brain via its spinal column.