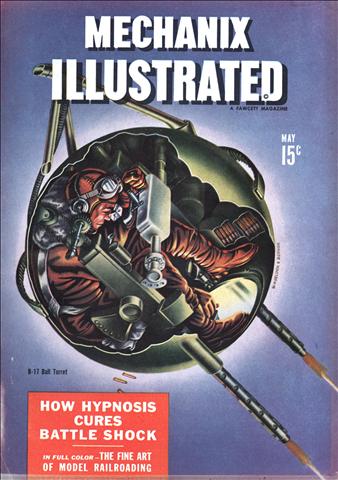 Jun, 1945
How "Jack the Weakling" SLAUGHTERED THE "DANCE-FLOOR HOG"!

I Can Make You A New Man, Too —in Only 15 Minutes A Day! HAVE YOU ever felt like Jack—absolutely fed up with having bigger, huskier fellows "push you around"?
"Handie Talkie"

If you count all of the transistors and other solid state components, a current model iPhone has something on the order of a quarter trillion parts. “Handie Talkie” comes out of its case to show its remarkably compact construction. The 5-tube sending and receiving radio telephone weighs only slightly more than 5 pounds, but contains […]
DO OUR SOLDIERS FEAR HYPNOSIS ?

by R. A. Montherlant The real story of "hypnoanalysis," miraculous mind-healer used by Army medicos. It cures almost everything from anxiety to asthma. THREE months after he had made a split-second escape from the fast-flooding engine room of his torpedoed ship, a 21-year-old merchant seaman reported as a patient to the U. S. Marine Hospital at Ellis Island, New York. He complained of severe and constant headaches, sleeplessness, and told of two distinct occasions when he had "blacked out" Like many other soldiers and sailors who have undergone the hardship and terror of battle, this seaman was suffering from what the public has learned to call "combat fatigue" or "psychoneurosis" and medical science more accurately terms the "acute traumatic war neuroses."
Leg Power replaces electricity

I don’t buy it. Hair dryers use a LOT of electricity. Plus, unless they have some sort of flywheel or intermediate battery, wouldn’t the power fluctuate if his speed alters? Leg Power replaces electricity in this Parisian beauty salon, where Madame has her hair dried despite the lack of coal-generated current. An ingenious beautician hires […]