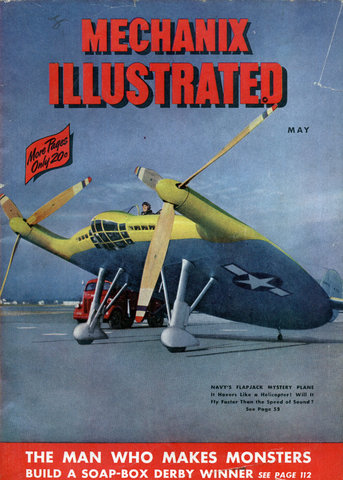 Well, apparently we acted, because in the U.S. cancer is now responsible for 1 in 4 deaths. Globally it is 1 in 8. (yes, I know that this primarily has a lot to do with people living to an older age and not dying of other things) Unless we act, 1 in 8 will die […]
AUTHENTIC WESTERN SADDLE RING

Errorless Typewriternot only saves time, materials and the secretary’s nerves but makes neat-as-a-pin copy with even right-hand (as well as left-hand) margins. The electrically driven machine does not print directly onto the paper but sets up a visible line which can be corrected and adjusted for spacing before it registers.
Super Dog-House

Super Dog-House was made from the Plexiglas section of a bomber’s gun turret and is a novel addition to the growing number of peacetime uses of products of war. At right, three-year-old Nancy Evans, of Detroit, Mich., makes friends with a cocker puppy, one of three occupants of the latest in abodes for canines.
Jet Racer

Jet Racer below puts on a show for the camera before a test run on Rosamond Dry Lake, California. Gene Kelly, builder, reported that although the throttle was opened only a fraction, speed was 30 mph.
Lamp Cigarette Lighter

Hot Spot made when the 10-volt infrared lamp above directs its heat rays at one point reaches 1,500 degrees and lights cigarettes held one inch away. The unusual lighter was demonstrated by Westinghouse.
Intoximeter

Intoximeter tests drivers for drunkenness. Below, Trooper Sam Maclntire of the East Lansing, Mich., post gives the test to a fellow officer who simulates a drunken driver.
The Flying Flapjack

BY GILBERT PAUST It looks like an aviator's nightmare, but this Navy job is the fastest - and slowest - plane in the air. THE Navy has a flying Flapjack, and brotherâ€”it can fly! It all began on a day in November, 1942, when the doors of the Vought hangar opened and test engineers trundled out a queer, saucer-shaped object on two long, stilted legsâ€”and claimed it was an airplane. The V-173, they called it, and gave credit for its design to an aeronautical engineer who had been active in NACA research and had recently joined the staff of Chance Vought: Charles H. Zimmerman.
Skinful of Art

SOME artists like to paint on canvas, some prefer paper, some billboards, but Charlie Wagner puts his masterpieces smack on the anatomies of his clients. Charlie is a tattoo artist. He's a skin man from way back when. Every one of his masterpieces is guaranteed to last a lifetime. His works of art become part and parcel of the wearer's epidermis. Charlie injects his art right into the skin itself, with an electric needle of his own design, and nothing short of an actual transplant can ever successfully remove it afterward. He carries a permanent? skinful of art himselfâ€”neck to foot. He started tattooing people around the time of the Spanish-American War and has been carrying on in the same spot, at the foot of the Bowery, in New York, ever since.
Colored Chicks to Order

FRANKLY, we didn't believe it either. But the evidence looks pretty convincing. It seems that down in San Juan, Puerto Rico, a certain experimental-minded senor named A. R. Zeno injected two dozen eggs with various vegetable dyes two hours before hatching time. When the chicks broke through their shells they were peeping happily and were apparently quite normal except that their feathers were bright blue, red, green, pink and lilac. And here they are as they arrived by Pan American air express eight hours later in New York City.
Man of the Monsters

Here's a genius who makes prehistoric monsters that "live." BY LUIS HOCHMAN SOME learned scientists and explorers are content to probe Mother Earth for moldy remnants of prehistoric monsters, but not George Harold Messmore. This energetic little man with big ideas and accomplishments to match simply built himself a dinosaur factory in the heart of New York and proceeded to turn out his own staggering array of life-size, breathing, eating, fighting, snarling, replicas of the huge creatures that roamed the earth long before man had a tail to hang by. Powered by from one to 17 silent motors, operating a complicated mass of cogs, wheels, cams, chains, and bellows beneath canvas and papier-mache hides, huge dinosaurs, stegosaurs, allosaurs, saber-tooth tigers, mastodons and other monsters lash their tails, blink their eyes, gnash their teeth, swing their heads and limbs and emit frightful howls and screams. (Their vocal renditions issue from small phonograph recordings in their throats, but the secret of how these voice-noises were figured out still lies locked in Messmore's brain.)
Periscope House

YOU walk across the green-lawned, palm-hemmed park overlooking the Pacific Ocean in Santa Monica, California, and climb the stairs to the little house in the picture above. Your party gathers around a circular rail in the center, the door is closed and at first all is darkness. Then, slowly and as if by magic, the scene you left outdoors a few minutes before appears on the revolvable table in front of you. Colors are perfectly natural. Strollers in the park move about, quite oblivious to their observers.