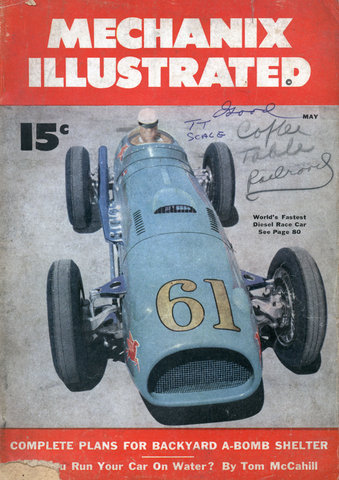 With coin-collecting know-how and a sharp eye, you can turn pennies into dollar bills. By Lester David THE man pressed his nose against the window of the curio shop in New York City. His eyes were attracted by a peculiar chunk of metal which gleamed dully from the cluttered assortment of bric-a-brac and jewelry. He strolled inside, asked for the object and turned it over and over curiously. It seemed to be just a rectangular block of gold, an inch and a quarter long and three-quarters of an inch thick. The price? Just a few dollars. He bought it, then spent the next two years finding out what it was.
Flying Saucer

Flying Saucer is for advertising purposes only. Walter Galonska, left, of Germany, spent a year building it. Since free-flying machines are verboten to Germans, Galonska anchors it with a steel cable. An electric motor drives the two contra-rotating propellers. Here he shows it to Dr. Ursinus, glider plane experimenter.
PARATROOPS by the PACKAGE

Like rations or ammo, infantry squads in metal containers can be dropped behind enemy lines. By Frank Tinsley SURPRISE packages have become America's newest war weapon! Engineers in the Air Materiel Command are testing a 6,000-pound capacity container which can be used to drop an entire infantry squad, completely equipped, from an airplane. A universal-type container, along with another cargo container, recently designed by the laboratory, will be used in the newer cargo airplanes such as the Fairchild C-119. The second container has been developed for use with the overhead mon- orail of the C-119. Still in an early research and development stage, the universal container holds great promise.
Look Before You Eat

IF you're a shy gourmet, constantly confused and embarrassed by super-duper menus in fancy restaurants, Keene's English Chop House in New York City is the eating spot for you. They've discovered a way to show you exactly what each item looks like before you order it.
TV Wet Bar

Tired Of TV? A certain New York executive was, so he took his 19 in. receiver, remounted the front on a swivel and now he and his friends find the set much more stimulating.
The Amateur Telescope Maker's Page: A Grinding Rig

A Grinding Rig WALKING around a barrel is undoubtedly a tedious procedure, but on the other hand it is the simplest method of grinding and polishing a telescope mirror. However, a number of our disciples have evidently gotten just a bit tired of this ambulatory procedure and have written to inqure whether there exists a more satisfactory and sedentary method of grinding said telescope mirrors. There is. As a matter of fact a number of such grinding rigs are described in Amateur Telescoping Making edited by Albert Ingalls.