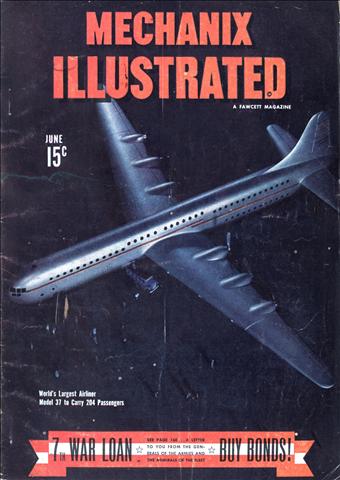 by Gilbert Paust, Mi's Aviation Editor The "stamplicker" rolls out long strips of coated burlap to form the latest in synthetic airstrips, the U.S. Army's "Hessian Mat." A FACTOR in Allied victories on the Western Front has been the availability of airstrips for our fighters directly behind the battle lines. Thanks to a new type of mat which resembles tar paper, Army engineers have been able to lay these emergency fields in record- breaking time.
SHOOTING THE MAIL

SHOOTING THE MAIL A CATAPULT device for airmail pickup is one for the coming air age, designed by Louis P. Wulf. Present methods employ a heavy shock-absorbing mechanism in the pickup plane which relieves stress on the cable when the mail is jerked from its resting position on the ground. This new wrinkle, however, obviates […]
Misc. Helicopters

Co-Axial Rotors. as on the Hiller-copter illustrated in the December Mechanix Illustrated, eliminate noise and vibration on this new helicopter designed by Vincent Bendix. The inventor claims it will be easier to operate and safer than an automobile. Two levers control the machine's flight, and continuous autorotation makes it possible to fly it with safety at altitudes of only 100 to 200 feet.
PLASTICS ARE GOING PLACES!

PREPARE NOW TO GO ALONG! Plastics, already proved in war, demonstrate their many advantages and varied uses. Now the plastics industry looks forward to the postwar period when they will be used in countless new ways... improving old products, creating new ones. A growing industry needs men to grow with it. That's why plastics offer remarkable opportunities to persons of ambition and foresight.
NEEDLING BATTLE JITTERS

by R. A. Montherlant NARCOSYNTHESIS—medicine's newest and most effective method of reclaiming from their mental hells the pitiful "combat fatigue" cases. MEDICINE'S newest and most streamlined method of fighting the battle jitters was perfected during the Tunisian campaign under the nerve-wracking conditions of a combat zone. In a base hospital at Algiers, where air raids were as much an accepted part of the day's routine as chow, Army doctors, working under the direction of Lieut. Col. Roy R. Grinker and Captain John P. Speigel, U. S. Army psychiatrists, established the scientific use of hypnosis-producing drugs in the treatment of "combat fatigue" cases.
WANTED - A MILLION-DOLLAR RIDE

by Harold S. Kahm Invent a new amusement for the thrill-hungry public and make a fortune. WOULD you like to make $100,000.00? .You can do it by inventing a new and successful amusement riding device. The average amusement park or carnival patron, swooping madly through the air in the whirling car of a Flying Scooter, or plunging down the breathtaking curves of a mammoth roller coaster, has one supreme thought in the back of his mind: "This is wonderful! Now let's have something new!"
CACTUS CARPENTER

CACTUS CARPENTER HERBERT WOOD, a former Pennsylvania contractor who went to Arizona to retire, began making furniture and knick-knacks out of the abundant native cactus purely as a hobby. But he soon found himself in possession of a prosperous business, selling his unusual and distinctive articles to tourists. He makes everything from ash trays to […]
THE MAN WHO SEES THINGS

THE MAN WHO SEES THINGS by Don Romero He trains our flyers by pouring the “dope” in through their eyes instead of their ears. ASSEN JORDANOFF spent the ages from six to fourteen inclusive trying to commit suicide. He called it wanting to learn how to fly. His first flights consisted of sliding down the […]