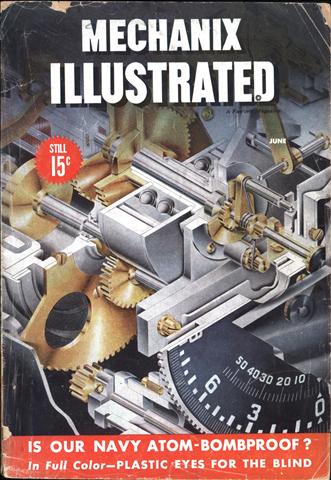 Summer Sky Thrill is promised by this airplane wheel, the invention of Harold T. Austin, of Seattle, Wash. Austin got the idea while working on B-29s at the Boeing Aircraft plant during the war and set up this first model in the back of his workshop. The wheel, a 1946 version of the Ferris Wheel, […]
The SWIFT

BY GILBERT PAUST Long cruising range, adaptability and fine performance make this one of the most popular new planes. ONE thing can be said for the Swift right from the start—it's a corking good airplane and offers the guy who wants to fly a lot more value than its price of $3,495.00 indicates. It's all-metal, one of the first samples of production-line technique applied to the aircraft industry.
FLEA FROLICS

Here are some highly talented fleas —dancers, pullers, racers, kickers. CAN you jump 1500 feet? Can you carry four tons? These fleas can (in proportion), so don't look down your nose at them. They're strong guys. And tough. Prof. LeRoy Heckler gets along with them fine. He breeds them, teaches them specialty acts, directs a circus in which they perform. He earns his bed and board that way.
Houses While You Wait

are the product of this giant house-building machine, which erects a two-bedroom concrete home in 24 hours. After the giant machine is wheeled into the desired location, its great box-like mold is lowered into position over a previously constructed framework.
Gem Cutting

The fine art of cutting precious and semi-precious stones isn't confined to professionals. It's also a fascinating and interesting hobby. BY ANN COLBERT ONE answer to the question "What kind of jobs can disabled veterans do?" has been given by Matthew and Daniel Rosenthal, who have trained many of them as lapidaries. The Rosenthal brothers are the owners of the Gabriel Williams Company, N. V. research laboratories with an impressive record in the fields of electronics, physics, color design and internal combustion engines.
Billion

Let's take a trip Inside the word "billion"—that word everbody uses but nobody really comprehends. Get set for an eyeful of surprises! BY ERIC SLOANE "CONGRESS Appropriates Five Billion Dollars"—"Russia Asks Seven Billion Dollar Loan"—"Europe Needs Three Billion Pounds of Meat"— billion—billion—everywhere we look we see that word. What is a billion? How much? Do you know?
EYE for an EYE

BY JAMES NEVIN MILLER The story of a remarkable artificial eye - one made of plastic which matches the other and actually moves naturally with it. I HAVE had an unforgettable A experience. While waiting for a friend in the visitors' parlor of the National Naval Medical Center at Bethesda, Md. I got to talking with a likable young sailor. We chatted maybe ten minutes and then he left. Our conversation wasn't important, but I noted that he wore a black patch over his left eye.
Cockpit PT

Take a tip from the AAF and relax yourself with these exercises which are done while sitting down. BY C. B. COLBY THE next time you are on a long auto ride or plane flight with some chap who used to be in the Air Corps you may get a scare. He may suddenly hunch his shoulders, arch his back and then slump down in his seat, rotate his shoulders or violently nod his head back and forth. If this happens don't bail out. It's not, combat fatigue, long woolen underwear or ants in his pants. He's doing cockpit "PT's" and a darn good habit it is, too.
Plastic Baby Grand

A smart looking cigarette or jewelry box anyone can make. BY FRANK McCARTY THOSE tiny plastic baby grand cigarette and jewelry boxes displayed in jewelry shop windows are not difficult for the inexperienced craftsman to make and the total cost will be only the price of a square foot of Lucite or Plexiglas plus a small tube of model airplane cement.
Choosing your Camera

In a quandary about what camera to buy? Decide to what class of picture-taker yon belong and then choose. By Robert Brightman SO YOU have been bitten by the photo bug, now that photographic equipment is again available? You're out to buy a camera? Well and good. Which one then? Oh, you've got a friend who owns a camera and he is going to help you make your choice. Fine. Well, you can rest assured that you are going to buy a camera like your friend's, one very similar to it, or else you are going to buy the camera your friend covets. For such is the way of the photo bug.
Flying Auto

If you keep the original formatting, the first line is “Flying Auto kills two”. That would explain why it’s “not yet ready to be placed on the market”. Popular Science did a much more comprehensive article on the car.  They at least mentioned the inventor’s name. It was designated as the Convair 116 which led […]
The Army's famed "pinwheel" is now on the market for civilians!

I'VE just been sitting in part of the future of aviation. It was unusually comfortable, had plenty of leg room, nice color harmony, good visibility and was equipped with such homey touches as ash trays and grey carpeting. This is a quickie description of the first commercial 4-place helicopter, the Sikorsky S-51. I was given a preview of it at the plant in Bridgeport, Conn., the home of "the only helicopters that went to war."
Bike That Grows

Bike That Grows up with the child is this new model, recently exhibited in New York City. By a few seconds adjustment of the horizontal seat post of the bicycle, it can be adapted to the requirements of either child or adult rider.
Crossroads at Bikini

The fate of our navy hangs on the outcome of the most dangerous and dramatic maneuver ever known! BY JAMES KEVIN MILLER OUT in the lonely atoll of Bikini, 4,150 miles southwest of San Francisco, the curtain of the first act of one of history's greatest dramas, Operation Crossroads, is about to rise. A production staff of 20,000 scientists and technologists has assembled the supporting cast and props. The dress rehearsal has been held, and the vast stage is set. For the stellar role, an A-bomb of the power used on Nagasaki will be dropped from a B-29 on about 100 surplus and obsolete ships.
Operation Muskox

the Canadian project to trek by machine across 3,100 miles of Canada's barren north and ice-clad arctic wastes, is shown on this page during its last days at Churchill, in Manitoba, before the expedition, expected to last over three months, took off on its icy way.
Automatic Pinspotter

If you’re looking for a more thorough explanation of how a pinsetter works, this Pop Sci article from the same year is handy. Automatic Pinspotter invented by Fred J. Schmidt, of Pearl River, N.Y., is shown here with its inventor. The machine employs mechanical, electrical and suction methods in its operation. It performs all phases […]
Could This Be Your House?

Mow that the war's over and a lot more civilian goods are on the market, it's a big temptation to spend just about all you make, and not put anything aside. But to fall for that temptation is plenty dangerous. It's like trying to live in the house above —a house that might come tumbling down about your ears at the first little blow of hard luck.
Post-War Crosley

Post-War Crosley has a streamline aluminum body on an 80-inch wheelbase and will be powered by a new type, four-cylinder, water-cooled engine developing 26-1/2-horsepower. The car has two seats in front and two in back. Bottom photo shows the remarkable new engine.
Jet Plane with a Propeller

The pieces of an XP-81 are currently in storage at the National Museum of the Air Force. Latest Jet Plane is this new Consolidated Vultee XP-81, the first plane ever to fly with a gas turbine engine designed for propeller drive. Powered by a gas turbine engine in the nose and a jet engine in […]
20-Second Sirloin

20-Second Sirloin is this steak, cooked on an airtronics machine, originally designed for the preheating of plastics for molding. It’s a natural for barbecues.
FLYING POST OFFICE

FLYING POST OFFICE A 200 mph. “flying post-office” using the Fairchild Packet cargo plane, is in the offing, according to a recent announcement by Post Office Department and Air Transport Association officials. The plane will be equipped with unique facilities for storing and sorting mail in flight which, coupled with the plane’s great capacity, long […]
MASTER OF MOCKUP

BY Don Romero Impossible? The man does it immediately and perfectly. THEODORE ENGBERT modestly calls himself a cabinet maker. Actually he is an "Aladdin's Lamp" for clients who require the impossible almost immediately. Short of a Brooklyn Bridge or a Holland Tunnel, Engbert can build anything—and produce it with the speed of a genie. And if he can't build the actual object, he can so realistically duplicate it in wood that for all visual purposes his "mock-up" will be indistinguishable from the real thing.
Car of Parts

Car of Parts is this home-made “Weep,” Edwarcl G. Hammond, retired Newton, Mass., lumber merchant. Utilizing spare parts from sixteen automobiles, a tractor, a mowing machine and a sailboat, Mr. Hammond’s dream chariot averages 50 miles on a gallon of gas and has a top speed of 60 mph. The basket is for golf clubs […]
VEGETABLE FASHIONS

VEGETABLE FASHIONS Margaret Newman, a well-known New York sculptress, has turned her talents to a new and original field. Using a vegetable garden as a source of color and supply, she has ventured into the field of women’s fashions with amusing mannekins made wholly of fruits and vegetables. With the help of celery, radishes, grapes, […]
The ARMY BRAIN

A GIANT "thinking machine," able to apply electronic speeds for the first time to mathematical tasks too difficult for previous solution, is now in use by the U. S. Army. It can compute 1,000 times faster than the most advanced calculating device previously known, can solve in hours problems which would take years on a mechanical machine and shows promise of revolutionizing long-range weather prediction and many other highly complicated sciences.