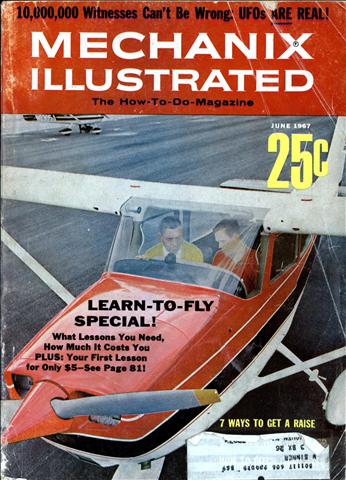 By James Berry YOU'D like a raise. But how can you get one? Pay boosts depend on your boss' decision. But helping him make that decision—in your favor—is often up to you. Getting a raise merely because you deserve it is not only very rare, it is Dullsville. Where's the fun? Life is a game when you know you're worth more than you're getting and you're taking steps to get what you're worth. Look at it that way—and remember that in nearly every job you must take steps to get as much as you deserve.
WILLY the walking bug

WILLY can be taken off the wooden track and played with but his finest moment is on the track, being pulled by the string. His legs take on a most lifelike movement which is imparted by the waves cut in the "wiggle spine."
10,000,000 UFO witnesses can't be wrong!

By Otto O. Binder A GALLUP POLL discloses the astonishing fact that 5 million Americans claim to have seen a UFO at one time or another since 1947. Even if 80 per cent of these so-called sightings can be proved to be of such ordinary objects as balloons, high-flying aircraft, birds, stars, etc., that leaves 1 million unsatisfied witnesses. In America alone! But UFOs also have been reported from more than 70 other countries and the estimated grand total of living witnesses for this little orb called Earth exceeds 10 million. Ten million men, women and children who have seen something out of the ordinary in the sky!