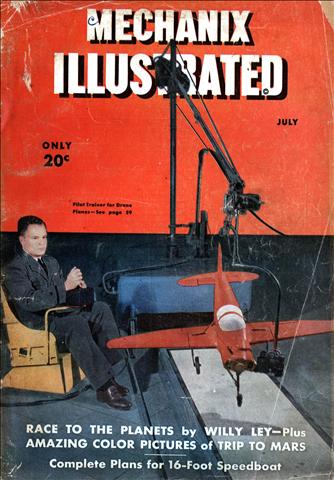 So that high-altitude ball-outs will not kill, the fast new planes are being designed to cone apart, allowing a safe drop in a tight capsule. BY ERIC SLOANE 4 T 60,000 feet the flyer's plane becomes his cell of life, its equipment almost as important as his own body. Outside the plane the cold of space is of instant-freeze intensity, much colder than any thickness of clothing could protect from. It is so thin that an exposed human's body would cease to function. Blood would boil there at body temperature. Death from oxygen lack would occur quickly. Accordingly, the high-altitude plane has a cabin pumped with high-pressure air. Heated clothing is plugged into the plane's power line.
MI tests the new Motorette

MECHANICAL rollor skates might be one way of describing them. Where-ever you went in southern Florida this year, the but-but-but of the Motorette was constant. When I saw the hundreds of little gas-powered bugs up every alley, street and path, I knew I had a "must" story. This was a Motorette year in Florida—and for good reason. These little cars, a happy cross between a motorcycle and your kid's tricycle, were primarily designed for use in mile-long aircraft plant, but they now spell fun with a lot of the practical on the side. They can seat two comfortably and carry enough baggage for a week-end.
Photo Wallpaper

Photo Wallpaper THROW out that wallpaper! Away with plaster! Your home may now have magnificent new walls—walls covered seemingly with rare and beautiful materials such as hare-wood, woven rattan, marble, even snakeskin—all practically indistinguishable from the real thing. The Di-Noc Company of Cleveland makes it possible. Using a record-sized camera they take color shots of […]
MI Tests the New Crosley

Tom McCahill, Mi's auto expert, puts the new Crosley through its automotive paces. EVER since I started on Mi's automobile test series in 1946 hundreds of letters have come in asking about the Crosley and other miniature pieces of transportation. So here is the dope on the Crosley. To get it I came to Florida, where they seem to be the most popular—and here I am writing this in Palm Beach.
"Commuter" helicopter

“Commuter” helicopter pictured at right and below is claimed to be the world’s first successful two-place co-axial rotary wing aircraft. The all-metal blades line up fore and aft above the aluminum tear-drop fuselage and all controls are contained in a single unit. In recent public tests it performed vertical take-offs and landings and turned on […]
race to the planets

BY WILLY LEY It won't be long! Earthmen are fast removing all obstacles to me conquest of Interplanetary space* EARTHMEN have set their thoughts on the conquest of space. More than that, they have set their hands to it. In dead earnest they are committed, in both the Old World and the New. It now can definitely be said, the race to the planets is on! Most experts are agreed that the first unmanned guided missile will strike the Moon some day during the next ten years. The fist manned Moon rocket will probably follow within five years after that. But that trip will not include a landing; it will be merely a trip around the Moon, at a comparatively close but respectful distance, with return to Earth after circling it a few times.
RELAX ON AIR

BY JACQUES MARTIAL, as told to Sophie Smoliar. RELAX on air! That's the promise of tomorrow's rubber furniture which will soon be replacing much of the overstuffed, coil-spring type in common use. Furniture manufacturers, long plagued by shortages of materials and also by a dearth of new ideas, have sought a way to produce comfortable and low-cost furniture. Now they claim to have found the answer in the principle of the air-filled rubber tube. With inexpensive materials and simple assembly, manufacturers foresee mass production with furniture prices spiraling downward.
Keaton's Kontraptions

BUSTER KEATON claims he's an inventor. Yes, and the former dead-pan comedian, now gag man, insists his devices are a boon to mankind. Hm! Enter the Keaton M-G-M office and the first thing you see is an elaborate contraption completely covering a four by six table. "That," says Buster proudly, "is my walnut cracker!" He pushes a button.
a PEEK in Santa's PACK!

Here are some off the more spectacular mechanical toys Junior will find under the Christmas tree this winter. THOUSANDS upon thousands of toys, many of them novel and spectacular, were recently pre-viewed by the nation's toy dealers at the 1947 American Toy Fair, held in New York. So productive was the first full year of peace-time toy engineering that the manufacturers' and jobbers' wares had to be distributed among two large hotels and several office buildings.
Scoot-Mobile

Scoot-Mobile will go 75 miles on a gallon of gas and 40 miles per hour, according to its designer and inventor, Norman Anderson (at left of group), of Corunna, Mich. He hopes to market the vehicle— made mostly from airplane parts—for $350. It has automatic shift, knee action and brakes on all three wheels.
Magnetic Secretary