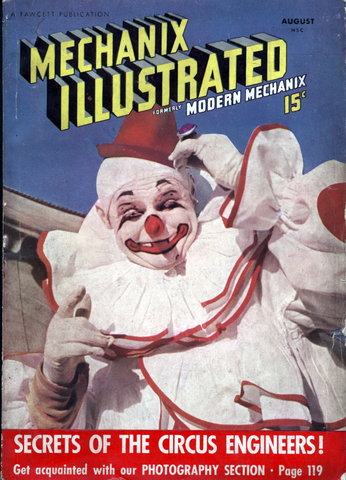 USING the gnarled and twisted roots of juniper shrubs as his medium, W.G. Hodgson, a rancher in Alberta, Canada, has attracted the attention of the artistic world by his ability to sculpture figurines which, by their perfection, express the countless moods of different human types. Strangely enough, the beautiful figurines are sculptured with carving implements made from salvaged parts of old automobile magnetos.
New Game Uses Wooden Foils

New Game Uses Wooden Foils A NEW fencing game uses foils made of wood with suction cups on the ends. Shields made of cardboard are worn with various sections of the body marked off. Face protecting masks made of cardboard and wire mesh also are included. Shown demonstrating the outfit are Rita Hart (left) of […]
Battery-Operated Hearing Aid Is Easily Concealed

SO SMALL that it can be effectively concealed while in use, as shown in the photo at right, a newly developed battery-operated hearing aid is actually a miniature telephone of the most improved type. The device has an efficient "transmitter" which picks up sound waves regardless of whether the wearer is reclining, sitting or standing.
GIANT Pictures From Pigmy Prints

By H.H. Slawson LIKE all big things that have a small beginning, the making of giant photomurals was just a little idea back in 1927, when Mrs. C. B. Goodspeed of Chicago walked into the photo studio of Kaufmann & Fabry. She carried with her a 4x5 negative of India's famed Taj Mahal and explained to the skeptical Messrs. Kaufmann & Fabry that her idea was to have a picture large enough to cover the entire wall of an alcove in her home. "We told her at once," said Arthur E. Clason, the veteran photographer who eventually completed the job, "that a picture the size she wanted had never been made before. Enlargements, as known today, were unheard of. The widest paper available was only forty inches, so three strips would be required to cover her eight-foot alcove.
Flying Bomb Guided by Man Pilot

GUIDED by a human pilot, a "flying bomb" designed by Lester P. Barlow, well known aerial munitions expert, would enable one man to destroy a battleship and escape alive, according to the inventor. The new aerial weapon consists of a small airplane-like structure, featuring wings, rudder and elevator controls, to which a 3,500-pound bomb is fitted as a nose.
Machine Registers Votes Electrically

Machine Registers Votes Electrically ELIMINATING the possibility of “stuffed” votes, a new voting machine employs a photo-electric cell to count ballots inserted in it. As each ballot is dropped in the box it intersects a light beam, causing a mechanical counter to register the ballot. No matter how many ballots might be stuffed into the […]
10000 Miles an Hour!

Rocket flights of tomorrow will circle the earth in 3 hoursâ€”maybe. WALK past almost any flowered field or meadow from Connecticut to California these fine summer afternoons and as likely as not you'll see little knots of agitated men puttering with strange-looking contraptions which hiss and let off gaseous odors. Edge over to satisfy your curiosity and some of them will come running up warningly to shoo you away. There's a good reason for the presence of so many mysterious looking men. Rocketry is making tremendous strides in its development as an embryonic science. Over the past winter there have been many important developments in cellar and garret workshops everywhere. Under the clear skies of July and August tests are being made to ascertain their practical value.
Metal Diving Suit Developed

Isn’t this from Innerspace? Metal Diving Suit Developed FITTED with ball bearing knuckle joints, which provide mobility for the wearer, a new all-metal diving suit is said to enable a diver to descend to a depth of 1,200 feet. The suit eliminates the need for air lines, having a specially designed built-in air tank. Hand-operated […]
First Dog Fitted With False Teeth

Dog Fitted With False Teeth “MacKENZIE BOY”, an aged BostÂ°n terrier pet owned by an Aberdeen, Wash., resident, is believed to be the first dog ever fitted with a complete set of false teeth. Dr. D. Fosland, of Aberdeen, constructed the artificial molars for the dog and it is claimed they enable the canine to […]
Powered Wheel Chair Goes 25 M.P.H.

Powered Wheel Chair Goes 25 M.P.H. TIRED of pushing himself around in an ordinary wheel chair, Charles Bancroft, of Port Arthur, Texas, constructed a three-wheeled vehicle which resembles an armored car in its general appearance. The home-built car is powered by a two-horsepower motor salvaged from a lawn mower and features a motorcycle transmission, the […]
Wading Outfit Lets Fisherman Float

Wading Outfit Lets Fisherman Float A NEWLY developed wading suit enables a fisherman not only to wade into a stream, but to float from spot to spot as well. The suit consists of a circular air-filled chamber, rubber wading boots and a water-proof body coverall comprising an integral, leak-proof unit, as shown in the photograph […]
Scariest Magazine Cover

I dunno, but this just makes me think of John Wayne Gacy.