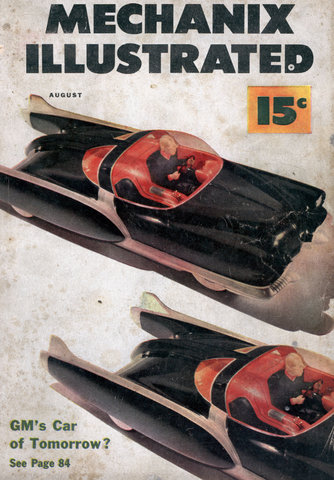 Like he always promised, Dad has bundled the family into the car to show them this great big country. There's lots to see—and they've seen lots. Historic places, mountains, deserts—new things— strange things—and wonderful! Seems like they're full up to here from looking.
New TV Projector

New TV Projector shown at a recent British exhibition, allows viewer to regulate size of screen image, as in the photos of girl below. The projector consists of a set of lenses and adjustable mirrors. It uses a two-and-a-half inch tube instead of the usual 12-inch type. The two tubes are set up at lower […]
I Shampoo the Sidewalks of New York

A bright idea and home town pride prompted this ex-sweater manufacturer to beautify the city's neglected pavements. Now he reaps the reward. By Louis Schwartz EAST Side, West Side, all around the Town . . . my Sidewalk Sanitation Service has made its debut and though it doesn't cover quite as big an area as the song does—yet—I hope S.S.S. will be just as familiar before long. I started this business a year ago by convincing one department store manager in New York City that scientific, mechanized methods could restore beauty to his sidewalks, at less expense than old-fashioned wash-'em-down methods. Today many of New York's leading stores and hotels, stretching over some 40 city blocks, have signed up for my beauty treatment.
Spinning Wing Airliner

More wing lift and less drag are the major aims of aviation's researchers. Maybe the Magnus Wing will supply the answers. ENGLAND'S aeronautical scientists may have a surprise in store for the rest of the flying world. Some years ago a prominent investigator, Anton Flettner, formulated the Magnus Effectâ€”the strange behavior of a drum spinning in an airflow. Today with modern materials, equipment and wind tunnels, interest is once more directed toward this strange phenomenon.
First Robot

First Robot in history is said to be this soldier with an automatic bellows blowing a trumpet. It was made in 1910 by Friedrich Kaufman of Dresden, Germany, and is on display at present in the Munich Museum. Clockwork spring drives it.
Chain Whittler

Chain Whittler is A.E. Powell, over 60 years old and a retired Colonel of the British Royal Engineers. Each link is whittled from a single piece of oak, birch, apple wood or mahogany with a small non-folding knife. “Never cut myself,” he says.
World's Largest Strongbox

By John L. Kent UNCLE Sam is storing priceless historical documents in the world's largest strongboxâ€”the National Archives Building in Washington, D. C. As a precaution against loss or damage in case of war or other catastrophe, special committees in government bureaus are picking out important records which must be preserved because of their historical value. These are shipped to the strongboxâ€”or to dispersed storage points outside the city.
Radio Bonnet

Radio Bonnet is a new style in Germany for ladies who require entertainment while their permanents are getting permanent. It has a built-in speaker which may be tuned in by the wearer. The small switch the Fraulein holds does the trick.
Gamblers Who Always Win

The odds are that you can get odds on almost anything today because modern statisticians have really taken the risk out of chance ONE afternoon a Lincoln, Nebraska, businessman sat in his car in a suburban gas station while his tank was being filled. As he waited, the telephone inside the station rang and presently the attendant came out. "Are you Mr. L. R. Johansen?" he asked.
ANTI-MURDER, INC.

Cop's best friend and crook's worst enemy is what they call Faurot, Inc., the company that makes and sells felony-fighting gadgets. By West Peterson PRICELESS furs were being stolen from a New York department store. Officials knew it was an inside job but weeks of watching had failed to reveal the criminals. Finally, the store called in John A. Dondero, president and scientific director of Faurot, Inc. Dondero examined the premises carefully and found nothing. But he did suspect the emergency exit doors which supposedly were never used. So, he sprinkled a special powder on the door knobs and then sent one of his men to watch the washroom. Soon, two employes came to wash some mysterious dark stains from their hands. Dondero accused them of using the emergency doors to pass furs out to waiting accomplices. At first they denied it, but then confessed when he told them how he had trapped them.
Gear-Shift Shoes

Gear-Shift Shoes are the result of 14 years of research by Louis Brunet, 70, of Tarbes, France. He says they take the “climb” out of “climbing.” Soles are adjustable so feet are always level whether you’re going up- or downhill.
Coddle That Bump of CURIOSITY!

Don't stifle your urge to inquire about the nature of simple things â€”you may be cutting yourself out of a million-dollar windfall. LABORATORY assistant Constantic Fahlberg was late for his lunch so he didn't stop to wash his hands. To his astonishment, when he ate a piece of bread it tasted sweeter than the sweetest cake he had ever eaten. So, he questioned the waitress. No, she said, the bread was unsweetened and the butter was the ordinary unsalted variety. Then he touched his tongue to his unwashed fingers: they were many times sweeter than honey! Thinking back, he concluded that his fingers must be invisibly smeared with the crystalline compound he had been mixing just before lunch hour. All agog with curiosity, Fahlberg hurried back to the laboratory and tasted the mixture. Sure enough, it was sweeter than sugarâ€”five hundred times sweeter! More experiments followed, and soon the medical profession had wonderful news for diabeticsâ€”saccharine!
Electronic Tick-Tack-Toe

How do you cheat in Tick-Tack-Toe? Tick-Tack-Toe brain is invention of 18-year-old Noel Elliott, finalist in the Westinghouse science talent search. After three years’ work, involving a study of the 362,882 possible variations, he perfected the machine so that it either wins or ties every game. It responds with a light flash when you pull […]
Airborne Beavers Fight Floods

This is one of the coolest things I’ve ever seen. Beaver paratroopers! Airborne Beavers Fight Floods OUT in Idaho, the Department of Fish and Game is teaching eager beavers to yell “Geronimo!” These busy little creatures are being dropped by parachute to terrain where they can do their bit in the conservation battle. Idaho state […]
Spooks on the Airways

By Irv Leiberman Illustrations By Chic Stone THE lady sat down in her luxurious bubble bath and soaked contentedly. "I'm forever blowing bubbles," crooned a soothing voice from underneath. She screamed and hopped out of the tub but the voice had stopped. Imagining herself the victim of her own delusions, she climbed back into the bathtub only to be startled by the same voice again. As it reached the end of the number, this time another voice boomed out with a commercial for a cigarette manufacturer.
FM Walkie-Talkie

I thought that a walkie talkie implied something you could carry, not strap on your back and lug around. FM Walkie-Talkie just announced by Motorola, Inc., of Chicago, 111., will be popular among law enforcement agencies, fire protection departments, forestry services, railroads, etc. It has 24 tubes and weighs 19 lbs. A tip-up loudspeaker broadcasts […]
Are These GM's Cars of Tomorrow?

By Bernard W. Crandell PROBABLY you'll never see any of the fanciful sketches on these pages coming down a production line or in your dealer's salesroom. Nobody at GM intends that you should. The sports car designs here are an important phase of automobile styling done by the General Motors Styling Section and the sketches fulfill a function of professional car designing for which there is no substituteâ€”uninhibited creativeness and daring imagination.