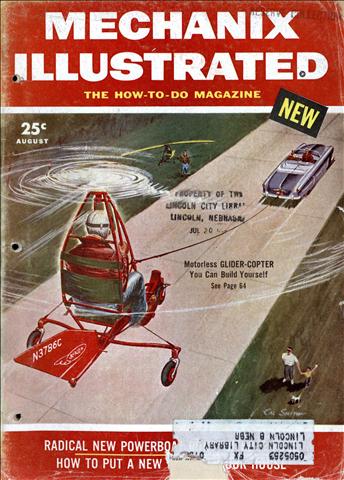 Uncle Tom takes a gander at America's favorite prestige automobile and discovers that for real economy, believe it or not, Cadillac is tops. By Tom McCahill "Gee Dad, look at the new Wurlitzer console organ, de luxe style!" "No, Son, that's one of them sightseeing trains." Obviously they are both wrong: the object they are looking at is a new Cadillac. For though the 1954 Caddie was not designed to look like a B-36 in flight, that long tail makes it possible to back over a guy for twenty minutes before the wheels touch him.
Ml-stoppers II

Ml-stoppers MUSCULAR MOLARS: pity the poor dentist who has to yank a tooth of Andre Le Gall, 53-year-old farmer of St. Malo. France, who shows how firmly anchored they are by pulling plough with same. SNAKY CRANE shown at the GE Appliance Park near Buechel, Ky.. can lift two men 50 feet in air to […]
Reluctant Taxidermist

Movie editor Bonn retired 27 years ago to enjoy his hobby but now he's back in business. By Peter Hill Gannet TWENTY-SEVEN years ago John H. Bonn, then living in Portchester, N. Y., was a successful motion picture production editor with Paramount Pictures. Taxidermy was only his hobby and at that time he was rather new at it. He'd been a fan only three years. It had always fascinated him, perhaps because of his love of animals and his appreciation of their beauty. It would be natural for him to try to duplicate nature's handiwork.
Zero to 60 in 7 Seconds!

WHEN Donner Denkler of Southampton, N. Y., purchased a Nash-Healey a while back he was impressed with the lines of the car and with its fine handling characteristics. But something was missing; in the acceleration and top speed departments his "bomb" just wasn't fast enough in its class for racing. He decided to add a shot of jump juice but the question that remained was how to go about it. After due consideration he concluded that instead of souping up the old power plant he would add an entirely new one—a Cadillac V-8.
Go South, Young Man

Amazonia, a land of fabulous unclaimed wealth, beckons now to men of vision. By Lester David THIS is the story of the richest treasure trove in the world today and of frontiersmen who are tapping bonanzas from a land of incredible opportunity. It is the story of a territory that has a welcome sign up for venturesome pioneers, backed by a promise of untold wealth. It is, in short, the story of the mammoth Amazon River basin in South America, by far the greatest storehouse of unworked natu- ral resources on the face of the globe.
NEW in SCIENCE

MECHANICAL RUG CLEANER designed by a carpet cleaning company in West Berlin, Germany, is a popular innovation in the trade. Device beats the dust and dirt from the rugs, then vacuum-cleans them—right on the street where customers can watch job being done. Housewives can also phone for service and company will oblige them. DURABLE DENTURES invented by Doctor Irving L. Cook of Suring, Wis., were designed to cut and shear food the same as a meat grinder. The molars and the bicuspids in the lower plate have holes in the tops and two channels down the outside where the food is forced through. Chap using them might be said to have an iron bite, eh?
SAN FRANCISCO FIGHTS FOR ITS CABLE CARS

"Save our cable cars," say Frisco's citizens. But the City Hall boys have other ideas. By Louis Hochman SAN FRANCISCO shakes again! In 1906 it was Nature that rocked the infant town into a mass of ashes and rubble. Today it's human nature that is giving this Golden Gate City the shakes with a wave of public sentiment that has spread far beyond the city's own boundaries. Once again the people of San Francisco have gathered in force to go fight City Hall. It's a battle between practicality and sentimentality and the object of this latest uprising is once again the dinky little cable car—that ding-dong relic of the Gay Nineties that continues to clang its merry way up and down the precipitous hills of San Francisco in blissful defiance of modern science and the forces of progress.
MI Tests The Triumph TR-2

"A hairy-chested, flame-spiffing wildcat" is how Tom describes this 104-mph import. By Tom McCahill THE fastest automobile in the world selling for under $2,500 is one way of summing up the TR-2 Triumph sports car. In its price class, the new Triumph is a hairy-chested, flame-spitting wildcat. With this uninhibited rig you can pass a flat-out MG with enough extra speed in hand to give the MG driver double pneumonia in addition to dust in his eye and a slight eardrum concussion.
He Turns Wooden Indians Into Wampum

Newspaperman Robertson whiffled a redskin on a hunch, now finds his idea is one heap big business, By Frank Lynn ONE day in 1934, Thayne Robertson, a Boise, Idaho newspaperman whose hobby was carving wooden figures, heard that a wooden Indian was wanted for a Western movie in Hollywood. Although he had never turned a piece of wood into an Indian, Robertson was fixed by the challenge and decided to give it a try with the hope that he would sell the carving to the film company.
BOAT RUNS ON SEA WATER

Free, unlimited electric power from the salty sea may soon replace gas, diesel engines in marine use. EVERY so often someone comes up with an idea so simple and apparent that millions of Monday-morning quarterbacks promptly kick themselves and mutter "Now why didn't I think of that?" Occasionally the idea is completely original. Usually, however, it is an old chestnut that has been kicked around until some bright lad finally dopes out a way to make it work. Ralph E. McCabe, designer and patentee of a practical, new salt water battery, does not claim to be the first to conceive the notion of extracting electric current from the ocean brine.
PRICKLY PAIR

TWO sharp quillers from the Amazon Jungle moved in with Marion and Paul McMichael of Brooklyn two years ago just so the husband and wife could prove a point. You see, the quillers are prehensile-tailed porcupines named Gerald and Geraldine and the McMichaels had heard that all such animals were dumb—and dangerous. As a member of the New York Zoological Society, Paul didn't think so and he brought a couple home to study..
King of Cymbals

An ancient Turkish formula has grown into one of the world's most fabulous monopolies. By H. W. Kellick IN quiet, colonial North Quincy, Massachusetts, a small vault-like structure as impenetrable as Fort Knox reverberates with a crash echoed 'round the world by 99 per cent of the professional bands and orchestras.
Build A Glider-Copter

AN 86-lb. helicopter glider, believed to be the smallest aircraft in the world today, has been developed and flown by Bensen Aircraft Corporation of Raleigh, N. C, for use in engineering tests of lighter-than-man helicopters. Like soaring gliders and sailplanes, the helicopter glider has no engine; it is towed by a car until it becomes airborne and will stay in the air as long as it is towed or as long as there is sufficient wind to keep its rotor blades turning.
LUCK FOR SALE

Even the best of us ore superstitious and we pay magic-charm sellers millions of dollars yearly. By Irv Leiberman Cleveland, Ohio Gentlemen: I notice your Life Everlasting Herb and if it is so good and luckey 1 would like to have one. Also tell me how to use it. I remane, Mr. B. F. THIS actual letter, typical of thousands, is the foundation stone of many a huge business fortune. It represents the average customer in a series of flourishing and highly profitable superstition transactions. Millions of Americans are in constant and ever hopeful search for ready-made luck and herbs to solve all their problems. And hundreds of energetic salesmen sell them almost anything their heart desires for a mere pittance.