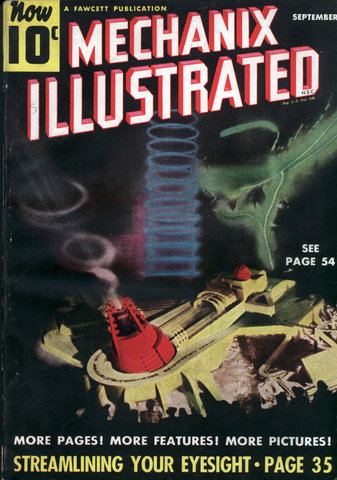 Air Raid Shelter In Garden THE beauties of a rock garden hide a reminder of war’s grimness. During the Sudeten scare of September, 1938, an English dentist constructed this concealed shelter from enemy bombers. It is ten feet long, three feet eight inches wide, and the walls are of solid concrete one foot six inches […]
World's Tallest Building

World’s Tallest Building In this drawing, the artist has shown how the “Palace of the Soviets,” now under construction in Moscow, will compare in height with the Empire State building, in New York City, at present the world’s tallest structure, and with Europe’s tallest, the Eiffel Tower in Paris. The Palace of the Soviets will […]
Machine Tears Apart And Rebuilds Speech

Machine Tears Apart And Rebuilds Speech A MACHINE that tears speech to pieces and remakes it in new patterns has been developed. Use of these machines for sending and receiving telephone messages would make wire-tapping impossible, unless the wiretapper had a machine with which to listen. Anyone listening with an ordinary receiver to a call […]
Spring Heels Make Walking Easier

Spring Heels Make Walking Easier THESE spring heels are claimed to be the latest aid for prolonging life by their inventor, a Swiss shoemaker. The lower portion of the heel is attached to the upper by means of small springs. These eliminate all jars to the various organs of the body which are experienced by […]
Two Can Play Big Harmonica

Two Can Play Big Harmonica THE mouth organ or harmonica, long a favorite instrument for the old fashioned barn dance and country “hoedown,” has grown increasingly popular, thanks to its extensive use by hillbilly bands. Its latest development is a giant harmonica 41 inches long and with a scale range of 320 notes. On it […]
Hair, Feathers Aid Cancer War

HAIR trimmed from 1,000,000 heads and feathers of 500,000 chickens provide a crystalline substance known as cystine used by eastern laboratories in the widening war on cancer. This new weapon in the fight against disease is a colorless, odorless chemical. Five thousand haircuts provide 100 pounds of hair, which in turn yield only five pounds of cystine.
New Cable Conquers Congestion

IMAGINE a city street with a thousand rows of telephone poles, each holding aloft sixty wires! Of course such a street would look more like a bad dream than any kind of a thoroughfare, but without the modern lead-covered cable that's exactly what half the streets in most of our larger cities would look like. The picture at the left showing lower Broadway, in New York City, in the '80s gives a slight hint of what a city street would look like without present day cables, developed in the past four decades by telephone engineers.
Stick Substitutes For Table

Stick Substitutes For Table A WORKMAN’S desire for comfort during his lunch hour is responsible for this novel picnic stick, which is a good substitute for a table. Instead of eating out of a dinner pail, the diner takes his food off a plate which is attached at a convenient height to the stick by […]
Keeps Smoke Out Of Eyes

Keeps Smoke Out Of Eyes WISHING to read his newspaper without the annoyance of clouds of smoke getting in his eyes, an Englishman invented an ingenious deviceâ€”a flexible cigarette holder of unusual length. Not only does it keep smoke out of the eyes; it also keeps tobacco particles from getting in the mouth. The idea […]
LEONARDO DA VINCI â€”Edison of Yesterday!

TODAY, just four and a half centuries after he lived, Leonardo da Vinci is receiving belated acclamation as one of the greatest inventive minds the world has ever known! Famous as a painter, sculptor, architect, scientist, engineer and anatomist, it has not been until the last decade that his genius as an inventor has been truly appreciated. To understand just why this side of history's most versatile man has been so neglected, we must go back to the latter part of the 15th century, about ten years before Columbus discovered America, for it was then that Leonardo da Vinci was at the height of his all-embracing career.
Make-Up For Television

Make-Up For Television Elaine Shepard, Hollywood film actress, could pass for an Indian in war paint when she wears the new standard television make-up. White high-lighting around the nostrils, eyes and hollows of the throat is necessary for good reproduction. Lips, eyebrows and eyelashes are blue-black.