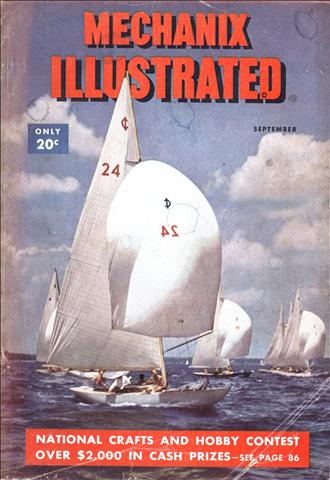 Canned Airplane THE Navy has begun “canning” more than 2,000 surplus carrier and trainer aircraft, to preserve them in near fly-away condition for periods up to five years. The “canning” process seals the complete planes, with wings folded, in metal containers constructed from 10-foot panels of corrugated steel. In each “can” relative humidity is kept […]
they hunt bats

Bats are very interesting animals - and these two scientists are experts at prying out their secrets. By Clay Perry THERE are all kinds of hunters, all kinds of hunting grounds—hunters with microscopes, elephant guns, cameras, hunters whose field is the jungle, the stratosphere, the ocean depths—but here's the story of two hunters in earth's underworld—American scientists, young, champions both. Their hunting is done in caves. They take their game alive, for the most part, by hand and net. Laboratory specimens they sometimes shoot. The rest of their game—and the numbers mount into the thousands—they shoot only with cameras, and let them go.
TELEVISION Goes to Work

Television has finally grown up and is beginning to pay for its long and expensive childhood. BY AL BERNSOHN "THOMAS R. JOHNSON'S account, please," the busy teller says into the phone. Back in the bank's file room the depositor's account sheet is placed on an easel before a fixed-focus television camera and the image of the ledger balance and Johnson's signature flashes onto a television screen in the cashier's cage.
Science in Pictures

Plastic rowboat is made of glass mat and plastic resin. Unaffected by saltwater, it can be stored in any climate. It is nine feet long, weighs 80 lbs. and holds five persons. Folding Car at right was designed for transportation to and from airports. Here, co-inventor Dick Jenner of Wichita, Kans., pulls it out of his plane's baggage compartment.
Science In Pictures

Rubber Fenders are the answer to the dent problem of motorists according to Inventor (and Doctor) Clauss B. Strauch, of Hazel Green, Wis. He says it's no gag. The rubber fenders are inflated. Elephant on Plastic at left demonstrates strength of a new building material made of paper and cotton impregnated with phenolic resin. The panel weighs only 30 pounds (one-fortieth as much as standard building materials) while the elephant weighs four tons.
Stuffing the Evidence

Thore's no need for a tall talc when you've got proof nailed on the wall. FISHERMEN and hunters have in all ages enjoyed a justifiable pride in their accomplishments. Around this human weakness has grown the art of taxidermy. Among sportsmen, one of the best known of these craftsmen is Fred C. N. Parke, of Bangor, Maine. Originally, he worked exclusively with game, but in recent years his volume has swung from animals to fish owing to the decrease of animal shooting and the upsurge in the popularity of fishing.
House of Steel

Want to live in a metal house? The one pictured here has frame, roof and wall sheets all of processed steel. Blanket type insulation and a system of natural ventilation help keep it cool in summer and warm and cosy in winter. Interior walls are of fire-proofed plasterboard.
AIR-SEA FIGHTERS

BY C.B. COLBY IT KILLS us to admit it but the British have sneaked in with two more aviation firsts—a jet powered flying boat and a seaplane fighter with retractable hull. From the Saunders-Roe back room comes the single seater SR/A1 jet fighter, one of the most interesting as well as prophetic aircraft of recent times. (See drawing at right.) This amazing little "pint-size clipper" with a nasty sting is the first boat-hulled aircraft to be powered with jet engines.
Shoot it in COLOR... indoors

INDOOR color photography is somewhat more critical than the black-and-white version of this fascinating pastime. But it shouldn't discourage anyone who can produce evenly-exposed black-and-white negatives with flash or flood lighting. If you are an old hand at black-and-white, you'll find that color technique differs from the approach you are used to in four basic respects. You must allow for: 1. Slow film speed— Weston ratings of available color films range between 8 and 12 only.
Super Terminal for Trucks

Colossal union truck terminals like this will help reduce the paralyzing congestion of city streets. By William Winter IF ANYTHING bothers the people of the New York metropolitan area as much as the significance of the A-bomb, it is their diabolical traffic problem. Having tried bridges, vehicular tunnels, and express highways, the Port of New York Authority is now doing something spectacular about the 2,500 intercity buses and 5,000 trucks that daily jam the city streets.
MISSILE VS. MISSILE

A rocket expert looks at our chances of withstanding a missile invasion. BY WILLY LEY SOMEBODY said recently that he would not be surprised if the AAF were researching itself out of business, at least as far as flying personnel is concerned. This somewhat surprising statement was based on the fact that a good number of the research projects which have been made known are aimed at high-velocity flight, either true supersonic flight or something close to it. Most of this fast flying would necessarily take place at very high altitudes where there is not too much air to interfere. And since the ramjet, the rocket and the rocket airplane can be improved more than the pilot, the pilotless missile is bound to be the final result in many cases.
HERE'S YOUR FUTURE CAR!

MI's auto expert, Tom McCahill, went to the car manufacturers and got the straight dope on what you can expect in the coming decade. SLEEK, beetle-high cars with retractable wings and power plants capable of jetlike acceleration, even when climbing Pike's Peak, are some of the things many Americans have been led to believe were a matter of months away. We have dreamed or thought of the day when our American cars would resemble Buck Rogers creations and perform accordingly. As the war drew to a close, we heard rumors of super streamlined beauties in the works which would make anything we knew of automobiles in the past seem antiquated.
Millions for a Scent

Take one last deep sniff, fellows, 'cause the perfume scientists are hell-bent on smelling up the world. By Lester David SCIENCE is smelling up the world, but sweetly. Sniff cautiously at your beat-up spare tire. It might smell like a garden bed in springtime. Uncork the pot of glue on your workbench. The pungent aroma of a northwoods pine grove may seep out. Put your nostrils close to a can of paint, a bottle of furniture polish, a container of fly spray. They're fragrant jasmin, mysterious roseau and sharp-scented saffron!
He makes faces

Wow, $2,000 is a lot for a mask in today’s dollars. With inflation the price would be $20,566 Wladyslaw Theodor Benda passed away about a year after this article came out. Before he started making masks he was an accomplished painter. He makes faces IF YOU want to buy a mask from W. T. Benda, […]
Onions Without Tears

WEEP no more, my lady. That greatest of all tear-jerkers, the onion, is now under control. Ever since the first bold botanist gave the potent vegetable to the world, the imperious onion has remained unconquered. One jab with a knife and stinging tears would brim the eyes of the strongest man, the most careful housewife. Nothing was done for centuries. Mankind accepted the dictatorship of the onion, kept on peeling, and kept on crying.
Gold Beaters

BY A.F. JOY ONE interesting occupation that has not changed an iota since Biblical times is gold-beating. Men still beat gold for decorative purposes, and "hand-beaten" is a byword for quality and endurance. When the gold beaters get through beating a piece of gold bar about 1/8-inch thick, after more than 24 hours of solid whacking, they have a ribbon of gold leaf yards long and so thin it measures about 1/50,000-inch thick.
Foolproof Navigator

The revolutionary now Decca Navigation System is so simple that the navigators of "blind" ships or planes gel their fix by merely matching two sets of figures. By Gold V. Sanders A RADIO navigation device so simple that a novice can navigate a ship or airplane with it has been perfected in England and is now being offered in this country. It is so simple in fact that all one has to know is how to read some simple figures and match them with the same figures on a map in order to get a "fix" on a fog-bound ship, or on a plane flying in darkness or above the clouds.
Science in Pictures

Push-Button Telegraph center permits messages to be typed only once, on a "printer perforator," at point of origin. When messages reach the center, a clerk pushes a button for the city of destination. Fishy Idea dreamed up by amateur inventor Dr. Carl Omeron, right, looks like a spark of genius. This is it: Tie balloons to a live "Judas" fish (which you catch the hard way). Put Judas back in the water and he'll lead the way to the whole school.
You Can't Fool... Gravity

You Can’t Fool… Gravity You can trick the human eye, but you can’t fool gravity. Can a body roll uphill? Yes. But doesn’t that violate the law of gravity? No. How come? In school we learned that every body has a center of gravity the point at which all the weight of the body can […]
Rescue Glider-Boat

This seems like a pretty weird way to rescue people… Glider-Boat IN ITS unceasing efforts to save lives at sea, the Coast Guard is developing the glider-boat rescue unit illustrated here. Towed by powerful aircraft, the device would be released over the scene of disaster. After gliding to the water, it would jettison its wings […]
These Missiles Won't Miss

These Missiles Won’t Miss MISSILES that lunge across the sky faster than the eye can follow— that turn and dive and adjust their courses unerringly toward the target— are being developed by the Naval Air Modification Unit, Johnsville, Pa., under the command of Rear Admiral D. Royce, USN. Accompanying these eerie, remotely controlled flights is […]
Air Freighters Have New Feet

This system also flew during tests with the Convair B-36 Air Freighters Have New Feet THIS new tractor type landing gear, now undergoing tests at Air Material Command headquarters, Wright Field, Ohio, is designed to enable heavy planes to land on runways which are not concrete-covered. The gear, which is similar to that used on […]