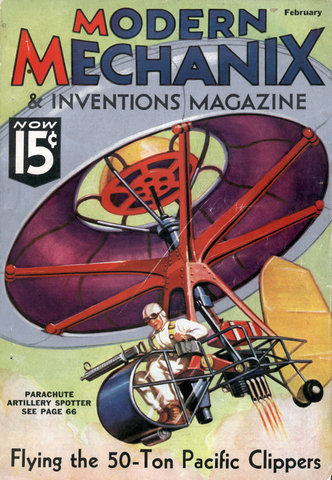 Speed Bike Has Natural Airlines NATURAL streamlining is accomplished in a new type of bicycle designed in England for use on the speedways. Aware of the discomfort suffered by racers who must remain humped up over their machines for long periods to reduce air resistance, the designer has placed the drive pedals behind the rear […]
Inventors Improve Household Gadgets

A FOUR BLADED SCISSORS that may be adjusted to cut ribbons in widths ranging from a quarter inch to two inches is supplying the need of dressmakers for such an article. It is shown in action in upper right. SHARP FORK TINES soon become dull. As a result a sharpener has been invented to maintain kitchen forks in perfect shape. As shown in upper left, the sharpener contains a cone of file edge ribs.
Taxidermist Gives Eternal Life To Birds

ARMED only with a forked stick, a hunter walked warily through the squat bushes of the San Fernando valley in Southern California the other day. Suddenly he froze in his tracks, warned by a series of rattles that hidden danger lay waiting. He advanced slowly, saw a Pacific rattle snake lying coiled and ready to strike. With the skill acquired from many such hunts, he pressed the stick down over the snake's neck, stuffed the reptile into a box, and hastened back to his Hollywood studio. There John Schleisser, famed naturalist-taxidermistâ€”for it was he who captured the deadly reptileâ€”chloroformed the rattler. A few minutes later he could be seen taking exact measurements by making a plaster cast of the body. Then he skinned the rattler, made a mannikin of papier mache duplicating the late deceased, and a few days later fitted the skin, perfectly tanned, back over the artificial body.
Hen Changed to Rooster by Biologists

Hen Changed to Rooster by Biologists TURNING roosters into hens and vice versa is the newest miracle to be attempted by science. Working at the Biological Institute of the College of France a group of scientists are engaged in a series of amazing experiments on the hypophysis gland, a small gland situated at the base […]
Radio Gets Robot Sound Technician

Radio Gets Robot Sound Technician A ROBOT sound effects technician for broadcasting studios has been perfected to eliminate more than 800 gadgets now required in the presentation of various programs. The new device consists of two turntables for records and three automatic pick-up arms. Each record is divided into numerous channels, and each channel contains […]
London Hospital Constructs $200,000 Radium Mercy Bomb

London Hospital Constructs $200,000 Radium Mercy Bomb CONTINUING the work begun by the late Madame Curie, eminent French pioneer in the use of radium for healing, physicists at the Westminster Hospital in London are now engaged in the construction of a $200,000 radium bomb which will greatly extend the mercy work of the beneficial rays. […]
TWILIGHT CITY -- Where Snapshots are Born

"It's easy to take a snapshot," as 500,000,000 pictures a year will testify. But behind the click of the lens there lies a story of high speed chemistry fascinating in its scope. The early amateur photographer carried a bulky apparatus in a portable, tent-shaped darkroom into which he plunged for a freshly-sensitized glass plate every time he wished to take a picture. Today's amateur, exposing some 500,000,000 snapshots yearly, has at his command a vast array of lightning-speed emulsions in convenient sizes and shapes, which are ready for instant use.
Hand-Drawn Soundtrack

SYNTHETIC musical notes that can be filed away in a card index have been developed by a group of Soviet musicians and scientists. The hand-sketched notes, resembling combs, are used to produce musical accompaniment for motion picture films.
"Woman in Shoe" Has Restaurant

“Woman in Shoe” Has Restaurant THERE was a young lady who lived in a shoe; Its use as a restaurant made her well-to-do.” Fashioned after the famous Mother Goose rhyme, a giant boot has been converted into a restaurant by Mrs. Anne Fleming of Ogden, Utah. Its unusual shape attracts many visitors, few of whom […]
Artillery Spotter Has Vertical Lift

Pulsating through the skies in much the same manner as employed by the jellyfish in propelling itself through water, a weird parachute artillery spotter is expected by its inventor, John A. Domenjoz of New York City, to supersede the ordinary kite-balloon in observation work during war. Greater maneuverability with resultant greater safety for the pilot, economy, and the elimination of ground crews are among the advantages claimed for this type of craft.
Precious Radium is Medicine's Treacherous Helper

Precious Radium is Medicine’s Treacherous Helper Rare metal is teamed with common lead to become an ally of science. Weird masks impregnated with lead shield this doctor from the withering rays of radium held in the tiny vial. These same rays become healing agents when they are properly directed. Leftâ€”-This solid lead container protects hospital […]
Feminine "Ham" Heard 'Round The World

Feminine “Ham” Heard ‘Round The World RADIO amateurs of six continents were contacted within 6 hours and 20 minutes recently by Miss Nellie Corry, young British radio enthusiast. The feat, regarded as a record in amateur broadcasting circles, is all the more remarkable in that Miss Corry accomplished it on a home made set costing […]
OIL - Modern WAR GOD Threatens the World

Black gold, precious underground liquid, is food for the modern war machine. Deprived of it, a nation's military campaign is threatened with failure. Will oil become an instrument to enforce peace or to cause war? WITHIN the last few decades, oil has changed from an almost unknown and unnecessary commodity to one of the world's most vitally needed materials. Oil, unlike nitroglycerin, has always been an innocent, viscous fluid used for lubrication and fuel. But harmless petroleum, like Dr. Jekyll, has undergone a startling transformation. Oil may yet be the means whereby the flaming torch of war is carried across the world.