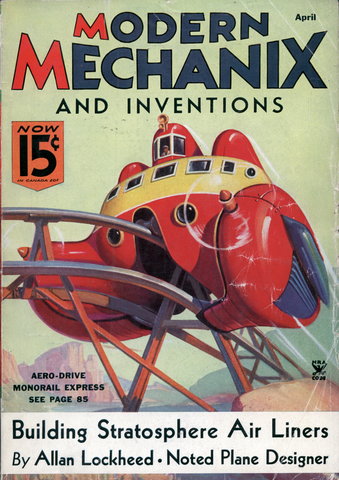 May, 1935
600-Passenger Plane of Future to Use Underground Airport

LOOKING into the future and visualizing l the fact that aviation will handle a great bulk of the world's transporation, Dr. William Christmas, noted inventor-aviator, has designed a new 600-passenger air-liner and a giant underground airport to service the planes and handle the passengers.
School Built To Please Children

School Built To Please Children INDOOR and outdoor class rooms are now being combined and built around a huge playground and swimming pool in a new experimental school now being built in Los Angeles. Built to induce the children to go to school because they want to rather than because they have to, classes will […]
Scientists Invent Machine To Discover How Brain Works

THE brain, perhaps the most mystifying organ of the human body, can now be scientifically studied by a new apparatus which photographs amplified "action currents." Invented by Dr. H. H. Jasper and Dr. L. Carmichael of Brown University, the new machine will permit physicians to study the action of the brain just as the electrocardiograph permits a revealing study of heart action.
Professor Stays Home; Conducts Class With Two-Way Radio

Professor Stays Home; Conducts Class With Two-Way Radio UTILIZING “micro-waves,” Marconi’s latest discovery in the radio field, Dr. C. C. Clark can lecture to his General Science class a quarter of a mile away without leaving the quiet comfort of his own home. A receiver in the class-room is tuned to the professor’s lecture, and […]
Duelists Break Custom; Shoot Selves In Target Practice

Duelists Break Custom; Shoot Selves In Target Practice QUITE contrary to the ancient custom of duelling, the members of the Southern California Colectors Association have evolved a bloodless version of the honorable art, using life-sized photographic enlargements of themselves as targets. One of the club members, a photographer by profession, struck upon the idea, and […]
Turntable Swings Autos To Pumps In Rotary Gas Station

A NEW type of filling station that uses a turntable to whirl automobiles around a center service island was recently opened in New York. The service island is set in the center of the turntable and consists of an enclosed office with three separate pumping units to dispense gasoline, oil, air, and water.
It always has stopped raining

I am utterly perplexed by this advertisement. Besides the obvious irony that for smokers sixty is more likely the beginning of the end, can someone please explain what point this ad is trying to get across? “It always has stopped raining”? Is that a proper sentence? It sounds like someone started with a sentence like […]
Building Stratosphere Air-Liners

by ALLAN LOCKHEED Noted Plane Designer This article on the strato-plane of the future tells how huge double-decked planes will speed through the rarefied air from coast to coast in six hours. ALLAN LOCKHEED Supplies the nation's premier flyersâ€”Lindbergh, Earhart, Hawks, Post, Wilkinsâ€”with Lockheed planes for their record feats. This pioneer of early aviation, now active on design work for air transports of the immediate future, contributed many of the ships that today are burning up commercial airline schedules and cutting air mail time in half. Consequently the words of Allan Lockheed, today one of the outstanding individual technicians of aviation, are of more than usual significance when he deals with the problems of flying airplanes in the stratosphere. His story follows:
Umbrella Follows Modern Trend With "Safety" Window

Umbrella Follows Modern Trend With “Safety” Window THE old umbrella, for ages untouched by the forward moving wheels of progress, has responded to the spirit of the times with the addition of a new front window to afford better vision. Hitherto, the umbrella user either had to carry his umbrella so high that it was […]
Racing Time For News Scoops

By ROBERT L. FREY Executive Assistant United Press Associations NEWS travels fast. It circles the globe like lightning while historic events are still in the making. The world was reading the tragic details of the Morro Castle disaster while her passengers were still leaping from the burning decks of the doomed Ward Liner into the storm-swept waters of the Atlantic. Less than 20 minutes after first radio operator Rogers sent his SOS from the Morro Castle, the tragic story was flashed over United Press leased wires into newspaper offices from coast to coast. Cables carried it to Europe, South America and the Orient.
Baby Bounces Through Window in "Safety" Chair

This seems like a REALLY bad idea. Put your baby on the end of a spring, right in front of the windshield… bright. Baby Bounces in Safety Chair A SAFETY chair which combines the enjoyment of a spring ride for the baby with assurance to the mother that he will not get hurt provides a […]
Pneumatic Tubes Shoot Hot Meals To Homes

WHIZZING at mile-a-minute speed through pneumatic tubes far beneath the streets of Berlin, Germany, are thermos bottles each containing part of some housewifes meal. A phone call is enough to bring, in less than fifteen minutes, a complete meal ready to serve, containing exactly the desired quantity and kind of food for each course.
CREATING LIFE LIKE Figures For WAX MUSEUMS

by HAROLD L. ZIMMER Washington, Roosevelt, Billy the Kid, Jesse James! All the world's most colorful figures stand out with startling reality in a wax museum. This article tells -how workers transfer a simple photograph into amazingly life like figures sculptured in tinted wax. WHERE do the horrors in the wax museums come from? This question may have troubled you as you paused in a side show for a few pleasant shudders. So realistically are they made, so gruesomely exact in every tiny detail, that it would seem the artist must have had the original models pose especially for him.
New Projector Throws Illustrations Behind Speaker's Back

New Projector Throws Illustrations Behind Speaker’s Back FACING the audience as he talks, a speaker may now illustrate his lectures on a screen behind him without turning around with the aid of a novel optical projector recently perfected by a well known German firm. The speaker, directly facing his audience, illustrates his talk by writing […]
RACING DEER NEWEST SPORT

RACING DEER NEWEST SPORT FLEETFOOTED deer are being trained for the hurdles and obstacles of the steeplechase course in California’s newest racing sport. They have been taught to circle a race track and leap hurdles with greater ease and grace than the best horses. Mr. and Mrs. Wilbur Timm, of Kelsey, Calif., started the new […]
Toy Train Delivers Rural Mail

Toy Train Delivers Rural Mail “NECESSITY is the mother of invention.” An Oregon rancher, living a mile from the highway, proved the truth of this old maxim when he put the world’s smallest mail train in operation over a spur line between his home and the road to save his wife the trip. The train, […]
Harness Prevents Running Escape

Harness Prevents Running Escape A HANDCUFF harness which prevents a prisoner from running away has been devised by Guy E. Lombard, Portland, Maine jailer. The harness consists of a steel ring held to the prisoners’ waist by a stout leather belt. The handcuffs are fastened to the belt, holding the prisoner’s hands so close to […]
Device Measures Musical Talent

Device Measures Musical Talent A YARDSTICK for the measurement of musical talent, an automatic tone-variator, is now being used at Northwestern University to determine students’ ability to determine exact tonal pitch. The machine contains 14 tuning-forks, set within one-quarter tone of each other. Two notes are struck in quick succession, and the students are asked […]
Rubber Telephone Cord Stretches

Rubber Telephone Cord Stretches A BAND of gum rubber, woven between the wires in the center of a telephone cord, gives it an elasticity which permits a stretch of four feet on a cord originally only one foot long. Small wires are packed into the rubber center like a spring to coil when released. Said […]
Defense Gun Hurls Balls of Fire

Defense Gun Hurls Balls of Fire A GUN which shoots eight streaking balls of fire in rapid succession is now being tested as a possible anti-aircraft gun to set fire to enemy planes during wartime. The gun is built on a “Roman Candle” principle, each ball being separately ignited from a battery as the trigger […]