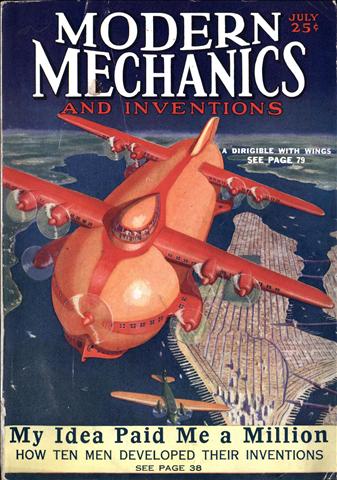 Garden Dirigibles Eclipse Old Type of Chimney Sweep DAYS of the old chimney sweep who wormed his way up or down a grimy flue are fast waning. This giant vacuum cleaner, shown at left, is one of the reasons why. It takes soot from the furnace, pipes and chimney by suction. After it has finished […]
New Type of Filing Cabinet Affords Speed and Accuracy

THESE girls, shown at right, don't have to worry about taking reducing exercises. They are filing clerks in the office of the New York Life Insurance company, New York, and spend their working day climbing and moving the ladders shown.
First Airplane Wash-Rack Helps Preserve Condition of Ships' Wings

CAR wash racks have been in existence almost as long as cars have themselves, but until recently there has not been a single wash-rack for airplanes. The Aero Corporation of California observed this fact and inaugurated an airplane washing service that thoroughly cleans a ship of grease and oil "while you wait."
Teach Young Russians Science of Building Model Airplanes

Is it just me, or does the kid on the right look like he has a wire plugged into the back of his head? Teach Young Russians Science of Building Model Airplanes SOVIET RUSSIA is not going to be “left on the ground” in the future. Youths of tomorrow are being trained in construction and […]
COO-COO? Judge for Yourself

Can you originate a Coo Coo Contraption? If you are a Coo Coo Inventor, your ideas may earn you a prize check from Modern Mechanics! These Coo Coo's below cashed in! Entries in Modern Mechanics' Coo Coo Contraptions contests continue to grow better and more numerous each month. If corporations have not already been formed to manufacture some of the devices that have been concocted by coo coo inventors, the Coo Coo Editor is seriously thinking of resigning to promote such a scheme among wealthy capitalists. Huge profits could be reaped, he believes, from the sale of some of the apparatus that has originated in the minds of some of the contestants.
Carter of the Red Planet - Part 3

Enlisting the services of the Green Men of Thark, John Carter and his formidable allies battle their way into the city of Zodanga and rescue the imprisoned Princess of Helium in this concluding installment of Edgar Rice Burroughs' great story of weird adventure on the planet Mars. "Carter of the Red Planet" is the most extraordinary work of imaginative fiction yet to come from the pen of the man who will be remembered as the author of "Tarzan of the Apes." by EDGAR RICE BURROUGHS Author of "TARZAN". IN WHAT strange manner I was transported across the wastes of space to the planet Mars, I cannot say—it was inexplicable to me then, years ago, and it is inexplicable now. The important fact was that I, John Carter of Virginia, awoke to find myself lying on the moss-bound ground of Mars, surrounded by a group of immense four-armed creatures whom I came to know as the Green Men of Mars.
Government Experts Testing the Sticking Quality of Postage Stamps

UNCLE SAM'S experts at the Bureau of Standards are endeavoring to determine how sticky a postage stamp should be. With this object in view, a special testing apparatus has been devised. It consists of a revolving drum into which letters with stamps attached are placed and rolled over many times.
Ideas for Needed Inventions

Here are four ideas which are capable of being developed into inventions which will fill crying needs in four different industries. Each is widely applicable and should net comfortable fortunes to the man who ultimately perfects them. HERE are ideas for inventions which are needed in four different industries. Some of the suggestions are specific, and others are general, but they all show fields in which the producers are looking for a product which can be greatly improved with the requisite inventions.
Take Your Radio on Your Motor Camping Trip

Edited by CHARLES MAGEE ADAMS WITH the advent of summer, the thoughts of many are turning eagerly vacation-ward. For a goodly proportion of car owners this means anticipation of a long interesting motor trip, with the added pleasure of camping en route. To the radio contingent the attractive prospect of such an expedition may be tinged with regret at leaving behind the trusty receiver and the programs it brings nightly. But that need not be the case.
Pneumatic Tubes Carry Correspondence Through Office Building

Pneumatic Tubes Carry Correspondence Through Office Building INTER-OFFICE correspondence is shunted about from one. floor to another with lightning-like rapidity, thanks to the pneumatic-tube system of transferring messages, recently installed in the new skyscraper of a New York insurance company. The various tubes shown in the photo below lead to different offices in the building. […]
Passengers' Luggage Handled Speedily by Monorail Line

Passengers’ Luggage Handled Speedily by Monorail Line HANDLING package freight to and from ocean-going vessels near Hamburg, Germany, is done in an extremely efficient and satisfactory manner. A unique monorail line carries bundles, trunks, etc., over an extensive tract of land and water to the passenger depot. The cars are drawn by a gasoline motor […]
Gets 90 Miles on Gallon of Gas

Gets 90 Miles on Gallon of Gas THIS youngster, shown in the photo below, is the envy of all the children in her neighborhood. Her ‘”private car” run? from its own power and is easily operated. It was built by her father and is capable of going 30 miles an hour. She gets about 90 […]
FLYERS have the World's Strangest Club

By a Member of the Club To join the famous Flying Jackass Club, one has to earn the title of "Flying Fool," by being proved guilty of some outstandingly silly piece of piloting. Related here are some of the thrills which have made men eligible for initiation. LOITERING in the benevolent shade of one of the hangars at Wright Field, a group of army flyers watched with casually interested eye the aerial capers of another lieutenant who was putting his machine through screaming chandelles, wing overs, and sickening dives. His masterful piloting was up to the usual army standard. The exhibition would have brought forth newspaper headlines ten years ago. Today it was all in the day's work. With a last roar the gun was cut and the pilots yawned. The Curtiss pursuit leveled off for a landing.
How the World will End

Scientists who have been tracing the history of the moon declare that the reign of fire and brimstone which will herald the end of the earth will in all probability be brought about by the moon's falling back upon the earth. The diagrams herewith illustrate the process which astronomers believe will destroy the world after thousands of years.
PATENTS Nutty or Novel?

These Extraordinary devices hare all been granted patents by the U. S. Government One-wheeled Sulky Would Make a Horse Laugh THIS invention of a one-wheeled racing sulky even made the horse laugh; he doesn't seem to realize that the joke is on him. What with keeping his balance and trying to steer the horse and dodging out of the way of the revolving contraption above his head, the gentlemanly jockey preserves his poise in a manner to warm the heart of Emily Post. With the addition of a garland of hibiscus and jonquils to the rim of
These Two Youngsters Are Out to Steal Their Dad's Racing Laurels

These kids look pretty bad-ass. And kudos to the father for making his daughter a model car instead of a model kitchen. These Two Youngsters Are Out to Steal Their Dad’s Racing Laurels Following in their dad’s footsteps seems to be the thing these two youngsters, shown below, enjoy most. They are the children of […]
A New Dirigible with Wings

INTENDED to revolutionize air and sea travel, a novel amphibian airship which combines various features of Zeppelin, airplane, and ship construction has been designed by Capt. William F. Cooper of Los Angeles, Cal. The model of his airship which is shown in the photos above is one ninety-sixth the size the air-liner will be when completed. With a wing spread of 200 feet, a length of 800 feet, and a gas-bag diameter of 135 feet, the airship will be the largest and most unusual craft ever to take the air.
Amphibian? Dirigible? No, Just a Common Automobile

THIS strange looking craft shown above is not meant for service in the air. It is used merely to attract attention—and it does just that. Touring the principal airports of America, this mystery ship, the "mono-dirigible," was built for Frank Bolger, president of the Associated Aviation Clubs, Inc.
My IDEA Paid Me a Million as told by TEN FAMOUS INVENTORS

This Amphibian Row-Mobile Travels Equally Well on Land or Water Land or water—it makes no difference to the passengers of this combination boat and automobile. The “amphibile” is propelled by the rowing motion of the occupants. The front wheels are used to steer both on land and in water.
Walls at German Auto Show

MOTORCYCLES by the hundreds covered the walls of the exhibition buildings at the recent Motor Show in Berlin. As shown in the photo at the left, the cycles were hung seven-deep upon the walls, with a row of machines fitted with side-car equipment occupying a ledge beneath.
"Vagabond" Shop Supplies Isolated Summer Resorts With New Books

LITERARY needs in fashionable but far distant resorts are provided for by this traveling book shop, shown in the photo below. This movable shop parks in some shady corner of a summer resort where books usually consist of the Bible and a school history of the United States. Its stock comprises popular fiction, classics and rare volumes of all natures.
Thrills of Driving Own Car on Auto Roller Coaster

THE surface of this elevated roadway shown above is perfectly smooth—-smooth, but not level. A succession of dips and rises that range in depth from five to ten feet afford motorists, running their cars over the course, all the thrills and pleasures of a roller coaster.
Table Tricks with Knives & Forks

By SAM BROWN The after-dinner tricks with knives and forks described here by Mr. Brown can be performed with little advance preparation, and they afford sure-fire entertainment for everybody. NOTHING so very magical about knives and forks. Once upon a time there was a man who ate peas . . . But that's something else again. How's this: The performer exhibits a napkin. He rolls it up loosely. He pokes a fork down into the center of the rolled up napkin. And then . . . abracadabra . . . the fork slowly rises from the napkin, bowing quaintly to the bewildered spectators.
I Made This Promise

I tried to OCR this, but my computer just started laughing at me.