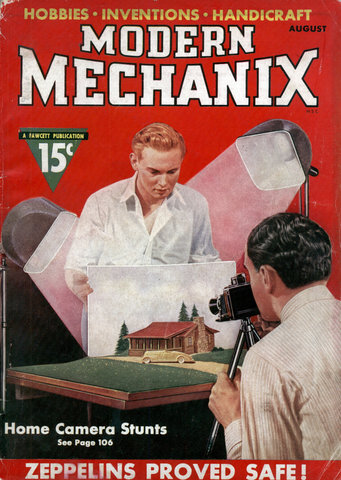 SIMPLIFYING aerial navigation problems to a point never before possible, an entirely new type navigation computer has been perfected by engineers and adopted as standard equipment by many pilots on the nationwide air travel systems. Designed to provide an immediate answer to navigation questions the pilot must face during the course of a flight, the new instrument combines features of a slide rule with a series of special scales in the form of three celluloid discs which rotate around a common center.
ADVENTURES of the POISON SQUAD

by James Nevin Miller IN THE city of White Plains, N. Y., not so long ago, more than 700 people suddenly were stricken with a mysterious ailment. City authorities thought the case was food poisoning. But just what kind, puzzled them. True enough, it was learned that all the victims had eaten chocolate eclairs, cream puffs or Boston cream pies. However, none of the custard-filled pastries appeared to be "spoiled" although it was suspected that contaminated custard filling might have been the source of the poisoning.
Inventions Needed in Field of Electrochemistry

An interview with Professor Colin G. Fink Head, Division of Electrochemistry Columbia University by Richard H. Parke "THE young inventor looking for new worlds to conquer would do well to investigate the vast but little-explored domains of electrochemistry. Hundreds of new products and inventions difficult or impossible to discover during the countless ages of the past with mechanical skill alone are today readily possible through the combined power of electricity and chemistry Thus Professor Colin G. Fink of Columbia University presents an invitation — and a challenge—to inventive minds everywhere.
Kiddies' "Whirl Swing" Combines Clothes Drier

A LAWN clothes drier that combines a thrilling "Whirl Swing" for children can be built from odds and ends at a negligible cost. The arms of the clothes drier, when not used for that purpose, are fitted with hobby horses to accommodate kiddie riders. Make the upright post from a length of 2-1/2 or 3-inch iron pipe and anchor it in a concrete foundation below the level of the lawn. Atop the post, mount a cast iron bearing unit, made as described in the details at left or, if desired, an auto wheel from which the rim and a portion of the spokes have been removed.
New Refrigerator Has Built-in Radio Receiver

Eight horse-power? That guy can really suck! Air Suction Drives Machine CONSISTING principally of four main wheels, three of which are nearly five feet in diameter and one-foot thick, a novel perpetual motion machine driven by air suction is claimed to have been invented by G. W. Johnston, of Tulsa, Okla. Valves and other wheels […]
36 Killed on the "Hindenburg" But Records Prove That Zeppelins Are Safe

by Bob Gordon TO MOST of us Earth-bound mortals, there is something singularly terrifying about death from the sky. The only terror equal to it is death from fire. When the two horrors are combined in one spectacular disaster such as overtook the airship Hindenburg, we of panicky imaginations are prone to ignore facts, prone to throw up our hands and cry, "That is enough!" Yet the men who must face this fate again if airship progress is to continue are far from ready to cry enough. Every uninjured survivor of the Hindenburg crew hurried back to Germany, that he might get a berth in the next great Zeppelin, the LZ-130, rapidly nearing completion.
RESTOCKING The OCEAN

Federal Bureau of Fisheries takes unusual measures to bal-ance inroads made by commercial fishers. C. S. van Dresser WHAT is probably the largest undertaking of its kind in the entire history of man has recently been completed, for, fantastic as it may sound, the ocean has been restocked by human efforts! This gigantic task was accomplished by the Federal Bureau of Fisheries which states, in part: "If all of the fish planted by the Bureau in the past fiscal year in the Atlantic and Pacific Oceans and in lakes and rivers were to grow to maturity and be caught, almost every man, woman and child in the United States could have approximately six pounds of fish every week for a solid year from this source alone."
Machine Provides Permanent Wave In One Minute

Machine Provides Permanent Wave In One Minute A ONE-MINUTE permanent waving machine of new design has been developed by Ralph Shakour, Frank Feeney, and E. Riley of Springfield, Mass. The device features vertical heater elements that preheat thirty-six aluminum curler clips in groups of eighteen because the speed of the machine is so rapid it […]