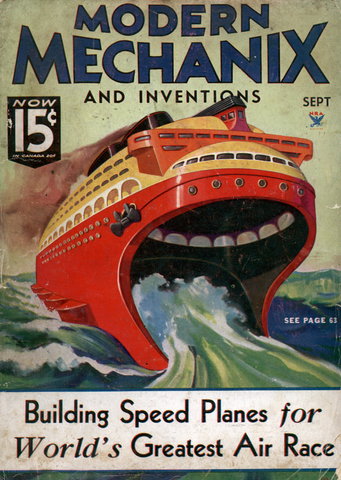 REPORTED to have tremendous military possibilities, a successful death ray machine is said to have been invented, after lengthy experiments, by a Cleveland scientist. A partial description of the machine's construction and operating principles was recently offered at a session of the National Inventors' Congress at Omaha, Nebraska.
Scientist Invents Nickel-in-Slot Blood Pressure Machine

Scientist Invents Nickel-in-Slot Blood Pressure Machine EVERYONE has put a nickel in the slot to make a telephone call, to buy candy, gum, horoscopes, and various gewgaws and “prize” packages; but soon, according to Dr. George A. Snyder of Hollywood, Calif., it will be possible to get a blood pressure reading for the same price. […]
Impossibility of Perpetual Motion Shown at Chicago Fair

Impossibility of Perpetual Motion Shown at Chicago Fair A “BALL power wheel” which is supposed to turn continuously because it is always unbalanced is just one of the many interesting “perpetual motion” models on exhibit in the Hall of Science of A Century of Progress. In spite of the fact that centuries of effort have […]
Sea Waves to Drive Ocean Liner

German engineer plans to build novel "whale mouth" ship using water as propelling medium. RESEMBLING a ferocious monster of the deep, an ocean liner is being designed in Germany to make use of the sea's unlimited energy as a propelling medium. The ship will have an opening in its bow that will give it the appearance of a giant whale swimming over the water with its jaws ready to devour anything in its path. This opening will gather up the ocean waves and pass them through the ship. The water will be ejected by means of spouts along the sides of the liner. The water, forced out under pressure, is expected to drive the ship forward at great speed. As a result the expense of operating a liner is expected to be reduced.
Are you Driving a Pleasure Car or Death Trap?

One in every three U. S. cars needs brake adjustments. One in every nine is a potential killer. This story gives the lowdown on the menace of bad brakes and tells you how to avert accidents. by CARL D. WEBB TWO men in a heavy touring car were roaring down the Jack Rabbit trail in California. Faster and faster they sped as the dark night and the deserted road lulled the driver into a false sense of security. Suddenly, as he rounded a curve, he saw a dark shape ahead. Frantically he jammed on his brakes and jerked the steering wheel. A wailing scream from the tearing tiresâ€” then a terrific crash as the skidding car smashed broadside into the obstruction. The two men in the touring car probably did not live long enough to feel the searing heat of the flames which enveloped their car and the gasoline truck which they had hit.
Dry Ice Makes Breath Visible

I suppose this would work if they didn’t have to talk… Dry Ice Makes Breath Visible MOTION picture directors can produce scenes in any climate by means of trick settings and clever mechanical devices. Critics have charged, however, that some snow scenes lacked realism because they lacked the usual phenomenon of breath becoming visible upon […]
Divining Rod Tunes in on Ore

What exquisite bullshit. Divining Rod Tunes in on Ore DEVELOPED on radioactive principles, a new divining rod has been perfected to tune in on underground minerals and water. The device, invented by Walter Henning, German engineer, consists of a vertical axis and horizontal arm from which a capsule is freely suspended. Into this capsule is […]
Pencil Forms Midget Radio Set

Pencil Forms Midget Radio Set A MIDGET crystal set, built into a common lead pencil, is the technician’s answer to demands for a personalized radio receiver. The crystal and cat’s whisker are built into eraser end of pencil. Headphones complete the outfit. Construction plans for a similar device were carried in the May issue of […]
Wine Keg Boat to Cross Channel

Wine Keg Boat to Cross Channel A SEA-GOING adventurer from Holland who last year crossed the English Channel on a water bicycle is attempting to add to his laurels by making the passage in a wine cask. The barrel-craft carries a tiny sail and is equipped with a miniature radio set.
Walk on Air With New Boots

All of us, tricked by the Reebok conspiracy. Walk on Air With New Boots A RUBBER boot which at lastenables man to walk on air has recently been perfected by an English inventor. Rubber bladders have been built into the boot both at the heel and the sole, with a rubber tube leading from the […]
Photograph Records Both Portrait and Voice

Photograph Records Both Portrait and Voice RECORDS of both the portrait and voice of subjects are the latest novelty photographs on the market in Germany. The paper on which the photograph is printed is also grooved for phonograph recording. After the photograph is taken and the print is made, the subject can transcribe his voice […]
Largest Camera Weighs 14 Tons

THE world's largest camera has just been completed for the Coast and Geodetic Survey. It weighs 14 tons and is 31 feet long. Two years' time was needed to build the camera which can take photographs with microscopic exactness. It is equipped to make nautical and airway charts with a precision of less than l/1000th of an inch. The camera can hold plates as large as 50 inches square.
How a Skyscraper Window Washer Faces Death

by FRED A. BELL HAILED as supermen, stunt artists are paid fabulous sums to risk their necks for a thrill-hungry public; yet their most hair-raising feats are duplicated every day by the daring men who clean the windows of the nation's towering skyscrapers. Perched at dizzy heights on window ledges barely wide enough to afford a toehold, the aces of the window brigade put circus acrobats and parachute jumpers to shame. For there is no margin of errorâ€”no nets or parachutes to break a possible fall. An error in judgment, a slip of the life belt and the window cleaner has signed his own death warrant. Below him there is nothing but a yawning city canyonâ€”a square of concrete pavement to land and die on.
Magnetic Rail Gun in 1934

Texan Builds Novel Electric Gun GIANT projectiles pulled at terrific velocities through powderless cannon by magnetism, leaving the barrel with scarcely more noise than that made by a .22 rifle, may set new problems for range finders. The electric gun invented and patented by Virgil Rigsby of San Augustine, Texas, is similar to an electric […]
Stretch Paper to Align Typing

This is certainly an interesting approach to kerning. Stretch Paper to Align Typing A NEW invention permits typewritten material to be lined up just as evenly on both sides as is the copy on this page. Typing is done on corrugated horizontal strips the width of a typewritten line, which in turn are cemented to […]