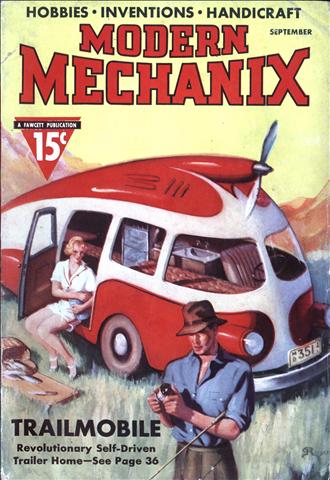 Next Issue:
This is the latest issue we have of this publication.
Midget Skis Set On Rollers

At first glance, I wasn’t sure if the word “midget” applied to the skis or the skier. Midget Skis Set On Rollers COMBINING the best features of skiing and roller skating, a new sport of “ski-skooting” has developed through the adaptation of midget skis on rollers. Two rubber-tipped poles are used to propel the skier […]
W3XFE TRANSMITS ON ALL WAVELENGTHS

THE nation's most unique radio station, which has the only permit ever granted by the Federal Communications Commission to transmit continuously on all radio frequencies, is in operation at Kensington, Maryland. Known as special experimental station W3XFE, the all-wave transmitter sends only to itself, using special apparatus.
Windmills for Steam

The fan-like internal structure of a huge steam turbine designed for driving an electric generator. High pressure steam enters through a close fitting cover at the center, and spreads through the "windmill" in both directions, transmitting its energy to the driveshaft. There are 1,500 blades.
Conveyor Speeds Shoeshine

Conveyor Speeds Shoeshine CONSISTING of a rotary conveyor seating eight persons and an elevated platform with steps for ascending and descending, a new shoeshining service unit has made its appearance in St. Louis, Mo. Better and quicker shines are said to be provided through use of the unit. After mounting a seat from the ascending […]
Railroads Run Special Cars For Amateur Photographers

IN ADDITION to their special trains for hikers, bicyclers and other hobby enthusiasts, railroads are now running special observation trains for the accommodation of amateur photographers. Many unusual photos are obtained as the amateurs "shoot" passing trains, entrances and exits from tunnels, sharp curves, etc.
MECHANICAL ARTISTS BLOW GLASS BOTTLES

Age-old art of lung-powered glass blowing gives way to puffing, snorting robots of almost human intelligence, capable of turning out 115 bottles a minute. by Harold L. Zimmer HAVE you ever picked up a soda or medicine bottle and wondered just how anything so perfect could be turned out in such huge numbers? Perhaps through your mind has flashed the heroic picture of countless, ruddy-cheeked men, industriously blowing away on long tubes, the respective ends of which are covered with round, glowing balls of hot glass.
He Was An Inventor at Ten!

by Robert Hertzberg William Dubilier now has more than 300 patents and is still active. A SNEAK thief who had been terrorizing residents of New York's famed lower East Side unwittingly started the son of one of his victims on a career of invention that has made the boy's name a by-word in the world of science. Only ten years old at the time, the youth already knew how a high-voltage spark coil worked and how to hook it up. When the thief made the mistake one night of trying the family's door knob, he screamed with pain at the first touch and found he couldn't let go. That ended a one-man crime wave and made young Bill Dubilier the hero of the neighborhood.
Science Builds Greatest Telescope

Monster 200-inch "eye" will reveal hitherto unknown secrets of the universe and enrich man's knowledge of life on earth. by John Edwin Hogg Nine years ago Palomar Mountain was a little-known mass of rock and earth in San Diego county, California. Being only 6,129 feet high, it is a mere foothill without even the distinction of altitude in a state where scores of perpetually snow-clad peaks rise to perpendicular heights of nearly three miles. A few Californians knew it as a good place to go deer hunting. Others, well-versed in state lore, had heard of it as the home of Nigger Nate, a fugitive slave who for many years lived the life of a recluse far up on Palomar's forested slopes.
1927 Car Goes Streamline

IN KEEPING with streamline design, Bernard Pica of 470 South Street, Quincy, Mass., built an advanced streamlined body for his 1927 Chevrolet. The chassis is still "pure Chevrolet" but the body is Pica's own adaptation of the "tear drop" styling. Made of aluminum, the body cost about $100 for materials and required four months to build.
Device Awakens Sleeper With Water In The Face

I had a similar device that would pour water on me when I refused to get up for school. I called her Mom. Device Awakens Sleeper With Water In The Face NOT even an alarm clock and radio will awaken Richard Hess, 21-year-old senior in Columbia College, Columbia University, so he rigged up this odd […]
Bank Gives Drive-In Service

Bank Gives Drive-In Service TO ANSWER the convenience needs of automobile patrons of the Security-First National Bank of Los Angeles, a drive-in branch has been built. At this bank, the patron drives his car into a special driveway along which special windows are available where he may transact his business. After the transaction is completed, […]
They're all riding Scooters

"HOW many?" the gas station attendant expectantly asks. "I'm just starting off on a little trip so you'd better fill it up," the rider replies. "Let me have seven cents' worth. And also, fill up the emergency tank." He takes a pint bottle from his pocket and hands it to the attendant.
Revolutionary Self-driven TRAILER HOME

by Frederick C. Russell Automotive prophets forecast a new type of home - on - wheels for the modern outdoor enthusiast. WHAT is the house trailer doing to the automobile? How is the automobile to look after it has been revamped by this new and increasingly popular vehicle of personal transportation? Will the motor car combine with the trailer to create a "touring and living car"—a car that we might call the "Trailmobile" or some other appropriate name?
Settee Resembles Old Wagon

Settee Resembles Old Wagon RESEMBLING a covered wagon of early pioneering days in appearance, a novel lawn settee drew much attention at a recent home-furnishing show in Chicago, Ill . A wooden chassis mounted on springs attached to wooden axles and wheels serves to hold a comfortable mattress and cushions, while a sun shade is […]