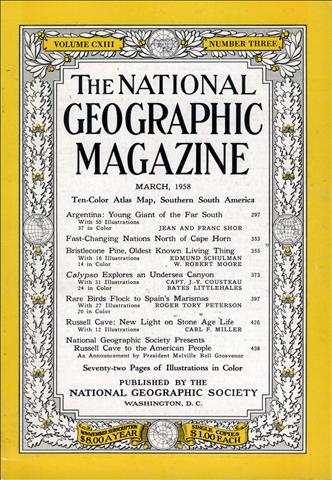 It’s Fun to Phone! A minute from now you can be having a happy time. Just phone someone who means a lot to you. True happiness is tlie kind you share. And nothing helps you do that so easily as your telephone. “It’s fun to phone.” Bell Telephone System
Even the skylines are different in Los Angeles

VISITORS ALWAYS REMARK how low and spread out Los Angeles is. This means more fresh-air living, instead of canyonlike streets. Our one real skyscraper is the 32-story City Hall! Everything seems different. A glass and redwood church stands alone atop a Pacific bluff. An hour away at Civic Center you can lunch Chinese or Spanish style, minutes away find the police offices made famous by TV sleuths.
Chevy Ad: YOU'LL HAVE PLENTY TO SHOW OFF

in the high-spirited performance of your NEW CHEVROLET. With its radical new Turbo-Thrust V8* and new action in all engines, it's so quick, agile and eager that once you take the wheel, you'll never want to leave it. You've got your hands on something really special!
Todays man-about -the-world heads for gay South America

Earth is composed of three states of matter, liquid, solid, gaseous. Yet most of the universe exists as the fourth state of matter, the plasma state. The bright suns and stars are plasmas — roving, unattached, electrified particles of matter that fuse into new particles on collision, releasing enormous energy.
Room for the whole darn tribe!

There's heap plenty room in a new De Soto wagon—room for a tribe or a tepee! And look how much more De Soto gives you for your wampum! NEW LOOK! De Soto wagons are styled sleek and low for the country club . . . they're built rugged for the ranch! NEW ENGINE! De Soto's new Turboflash V-8 engine is the first in a new breed of power plants! This giant is powerful, quiet and thrifty, even on short trips around town.
From Hamilton - the only watches run electrically

From Hamilton – the only watches run electrically Electricity gives them uncanny accuracy. No winding, no twist of the wrist needed. A tiny power cell inside does the work. Rugged, practical watches, Hamilton Electrics have fewer parts (no mainspring!). Your Hamilton Jeweler now has the new Anniversary series celebrating the first birthday of the world’s […]
you'll love Scandinavia!