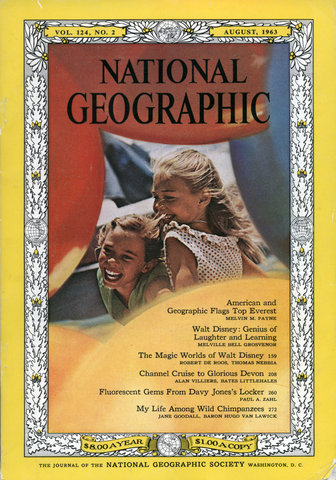 At first glance, you'd think only United jets land at our new Los Angeles jet terminal. Not so. Helicopters land there, too. In fact, you can step from a United jet, walk a few steps, and board a convenient helicopter to Disneyland or 17 other points. The area at right (near the red truck) is the only airport boarding area for Los Angeles Airways helicopters. What could be more convenient?
The Magic Worlds of Walt Disney: Part 3

This article is huge (50 pages) so I’ve broken it up into three parts. Part One Part Two
The Magic Worlds of Walt Disney: Part 2

This article is huge (50 pages) so I’ve broken it up into three parts. Part One Part Three
The Magic Worlds of Walt Disney: Part 1

By ROBERT DE ROOS Illustrations by National Geographic photographer THOMAS NEBBIA ONE AUTUMN EVENING in 1928, a new actor appeared at the Colony Theatre in New York in a movie called Steamboat Willie, the first cartoon ever produced with sound. He had ears bigger than Clark Gable's, legs like rubber hose, a grin wider than Joe E. Brown's, and a heart of gold. His name was Mickey Mouse. Beginning that night, Mickey and his creator, Walt Disney, grabbed the world's funny bone and have never lost their grip. The New York Times praised the new film as "ingenious." "A wow!" cried the Weekly Film Review. Thus was born history's most influential mouse. Mickey led the way in the development of anima-tion as a new art, to the exploration of the world of animals and faraway people and of their adventures and geography.
Ad: Pratt & Whitney Aircraft

Moving 45 tons at 550 miles per hour is routine for today’s mighty jet transports. These transoceanic Boeing, Douglas, and Lockheed sky freighters are powered by Pratt & Whitney Aircraft’s modern JT3D turbofan engines. Pratt & Whitney Aircraft provides design and manufacturing leadership in power for many applications, in and out of this world. Pratt […]