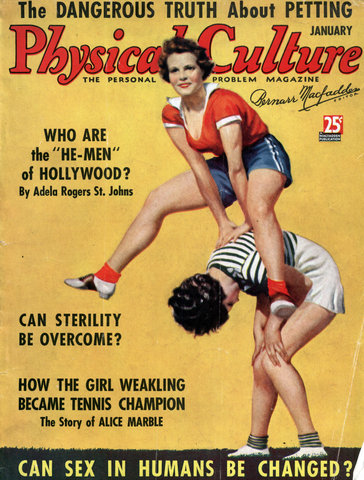 By MADAME SYLVIA FASHION, like history, often repeats itself. Lately that mysterious group has been at it again. This time trying to sell American women the idea of bustles, peplums, flares, circular and barrel skirts. Fashion hasn't got a chance with such goings-on. They tried once before, and not long ago, to stimulate interest in the hour-glass figure with spacious bosoms and billowy hips, but it was not a success. If your hips are already large, such fandangles as mentioned above will only attract attention to them and make them appear larger. And who wants that?
PEOPLE DON'T DIE -THEY COMMIT SUICIDE

BY BERNARR MACFADDEN NATURAL deaths are rare. It looks as though John D. Rockefeller, Sr., will have a chance to die as nature intended. The last twenty-five or thirty years he has adhered rigidly to what we might call the laws of life. He has prolonged his life to the end that nature intended for all of us. We have heard of the saying, "Digging your grave with your teeth," which, in a way, refers to overeating.
New York's Handsomest Men Say: "For a thorough and safer cleansing, Listerine Tooth Paste every time!"

That's straight from the shoulder advice from the hardest boiled critics of tooth paste — the men who every day must face the merciless eye of the camera in New York commercial studios. Men like Glen Gallagher, William Crabb, Harry Conover, whose very livelihood depends largely on the perfection of their teeth, cannot afford to take chances with ordinary tooth paste.
THAT "BLUEBEARD" IN YOUR HOME

What Makes a "Sadist"? Exploring the Psychology of the Cruelty Impulse So Common to Millions By Michael Carmichael ONCE upon a timeâ€”I'd better warn you that this is not a bed-time story for the timid or the young â€”once upon a time there was a man called Bluebeard who had a very bad habitâ€”that of murdering his wives. He'd marry a pretty girl, and, after a brief honeymoon, would tell his bride that he must take a trip and that he counted on her to run the house well in his absence. He handed her the keys and warned her that there was one room which she must not enter. He pointed out the key and the location of the forbidden room, kissed the lady good-by and departed with a cynical certainty that the trap was laid and baited. Curiosity would draw her to that room as a magnet attracts a needle.
The Truth About Petting

By Lawrence Gould, Consulting Psychologist Is Petting Right or Wrong? How Much, if Any, Seems Wholesome? This Clarifies a Problem Perplexing Both Youngsters and Parents MRS. HUNTER had appeared so radiantly happy the last few times I had met her that it was a shock to see her looking as she did that morning. I had known her slightly for several years as assistant to the manager of the building where I had my office, and had heard her story from the manager and some of the other tenants. Her husband had died ten years before, leaving her with an eight-year-old daughter and only a few hundred dollars of insurance. She had gone back to the work which she had done before her marriage, and by dint of industry, intelligence and self-denial had managed to make a comfortable home for Mary. The girl was in every way a credit to her, gay and carefree, but devoted to her mother, and both faithful and successful in her studies.
Sterility is Now Being Overcome

There is new solace for empty arms as science helps the limping stork By Lorine Pruette, Ph.D DYNASTIES have been changed and the course of history affected by the failure of particular unions to be fruitful. Catherine the Great took a lover because of the necessity to provide the throne with an heir and introduced entirely new strains into the royal family of Russia. Henry the Eighth of England made his numerous excursions into matrimony, in part at least, out of the desire for a male heir. As a by-product of his excursions we have the break with the Catholic Church, the establishment of the Church of England and vast changes in England's internal affairs and in her relations with the continental countries. Henry's children mounted the throne in succession, but all three died without heirs. Had his daughter Mary borne a child to her husband, Philip of Spain, much history might have had to be rewritten and certainly England would have been returned for a time to the bosom of the Mother Church.
Can Sex in Humans Be Changed?

By Donald Furthman Wickets ALL the old landmarks are going, nothing is static, everything flows. Old dreams and old nightmares become realities. Life is created in the laboratory. Sex is no longer immutable. Recently the astonishing news made the rounds that science had actually succeeded in changing the gender of two female athletes. The miracle was accomplished by surgery and duly acknowledged by law. Mary Weston, who held (and still holds) the shotput record for women in Great Britain, is Case No. One. In 1926 Mary won the British javelin championship of her sex. "She" also, at one time or another, represented her country's womanhood at the Olympic Games. Today, Mary Weston, now known as Mark Weston, is a young man legally and is happily married to a normal young woman. Dr. L. R. Broster, a London surgeon, certifies: "that Mark Weston, who has always been brought up as a female, is a male and should continue to live as such." Discussing his athletic records before his transformation, Weston insists that he believed at the time that he was a woman.