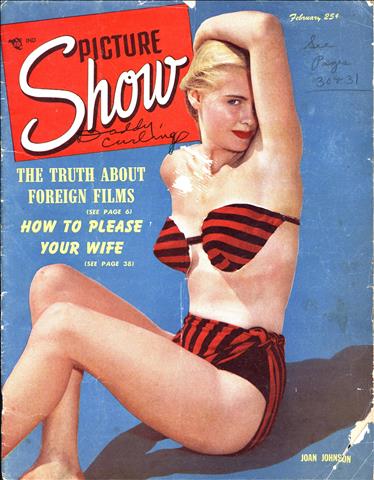 Next Issue:
This is the latest issue we have of this publication.
A STONE, A BROOM, A BONSPIEL

THE OLD SCOTTISH SPORT OF CURLING IS WINNING NEW FANS IN AMERICA THERE'S none of the fire that goes with brimstone in this broom and stone game called curling—one of the oldest and most baffling man-devised sports on ice. In its essentials, this ancient Scottish pastime is like bowling or shuffleboard except that it requires much more finesse and subtlety than both.
CAREER GIRL

WE'RE continually running picture of lovely young ladies and writing; that their ambition is to get into the movies or television—which it usually is. But somehow. we never do hear whether they succeed in their ambitions or not. They drop into a silent limbo of girls who* want to go places but apparently never do.
FEMALE MENACE

A South Carolina girl of French-Indian descent is a Chinese temptress on TV GLORIA SAUNDERS, one of the most talked-about girls in Hollywood, is the dramatic star of "Mysteries of Chinatown," a television show on the ABC network. Playing the part of a beautiful Chinese girl, Ah Toy, she gets involved in a constant mess of crime and murder each week to the delight of her fans.
"THEM DAYS ARE GONE FOREVER!"

Yep, there was a time when you could buy a sirloin steak for fifteen cents! DEARIE, if you remember when a steak smothered with onions cost you a fast fifteen cents, when horses pulled fire engines and women laced themselves into ulcer-making corsets, then you're much older than we are—hut not by much!
THESE FOREIGN FILMS...

ASKED TO GUESS the name of the movie which has enjoyed the longest run on Broadway in modern times, it's probable that most Americans would come up with a Betty Grable flicker, or one of the Bing Crosby-Bolt Hope Road films, or perhaps an Abbott and Costello comedy.
TWINKLE TOES

BALLERINA HARRIET TALBOT BLAZES A TRAIL TO STARDOM WITH HER LEAPS EVER SINCE Picasso took to painting pictures in the air with lights, imaginative photographers have followed suit in this new medium of atmosphere and electricity.
PITY THE POOR PHOTOGRAPHER

The lens-hawks of the press risk life and limb to bring you those front-page pictures . REPORTS FROM the Korean war zone of the reporters and press photographers killed or wounded in action frame as no surprise to anyone who has followed the remarkable development of on-the-spot journalism in the past twenty years.
GARDEN OF EDEN

The exciting eyes of lovely Eden Hartford have been called a mirror of the "eternal feminine" LOVELY Eden Hartford looks more like a languorous Eve than the Eden her mother named her. And like Eve, the eternal feminine, Eden becomes decorative in many poses and many guises. That quality is what started the young lady—she's still only 20—on a professional career a little over a year ago.
THE PUNISHMENT FITS THE CRIME - NSFW

THE PICTURES on these pages, remarkable for showing the punishment inflicted for stealing in Saudi Arabia, are even more remarkable considering that pictures of any kind, photographed or painted, moving or still, are considered graven images and so arc forbidden by the Prophet in all the lands of Islam.
HOW TO PLEASE YOUR WIFE

IF YOU'VE ever paused before a surrealistic sample of Salvador Dali's modern art and wondered what the famous painter was trying to convey—brace yourself for further bewilderment. Nowadays you're likely to see Dalis is being worn as well as hanging in museums.
GENTLEMEN BEWARE!

West Coast audition for "Gentlemen Prefer Blondes" sees California's loveliest charmers GENE MANN, who is known as the Rodgers and Hammerstein of Hollywood, recently held auditions for the California version of Gentlemen Prefer Blondes. the musical comedy based on the hook by Anita Loos that is still going strong on Broadway.
IT WON'T BE LONG NOW!