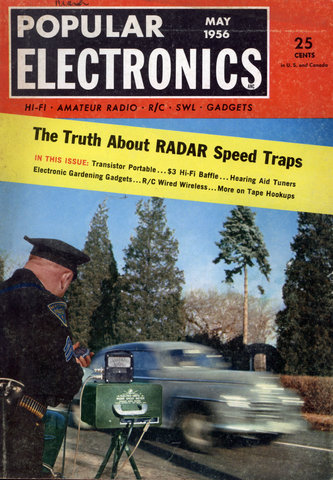 Jul, 1957
How to CRACK the education barrier

Is there an "education barrier" between you and promotion? Are young college graduates being brought in to fill positions above you? You can break down that barrier . . . gain real security, responsibility, prestige . . . surprise fellow employees and win their respect. You can match yourself against the smartest of the college boys and come out a WINNER. Here's how!
German Electronics Moves Ahead

Safety Computer Forecasts Atomic Fall-out Pattern How “safe” is it to test an atom bomb ? Will wind-blown radioactive dust or charged rain clouds endanger life or crops in inhabited regions? The National Bureau of Standards recently developed a “portable” analog computer to assist in predicting radioactive fall-out from a nuclear explosion. The fall-out pattern […]
Electronic Check and Double-Check

What has a lady wearing a fur coat to do with electronics? The schematic being studied by the miss in mink is the brain that will guard her valuable garment when she puts it in storage for the summer. But how do we know that safety devices are always alert? After all, even electronic watchdogs go to sleep sometimes.
Home Recording Disc

Marriage of Aluminum and Acetate THE BLANK recording disc is to phonograph records what unexposed film is to photographs. Any record groove ever played with a pickup was originally cut on a recording disc. This is as true today, in the age of high-fidelity tape masters and LP records, as it was in the days of Caruso and acoustical recording.
Radar on the Highway

A POP'tronics Exclusive Report on Radar Speed Meters ONE DAY SOON you may be speeding along a lightly traveled highway and find that electronics has indeed arrived. In fact, it has arrived to the tune of a wailing siren and a big, flashing red lightâ€” you have been caught by a radar speed meter. Much to your chagrin, the poor motorist with the flat tire, parked at the side of the road, was really a highway patrol car. A radar broadcast reached out and measured your speed. Simultaneously, a printed record was made that is accepted as irrefutable evidence in 99% of the traffic courts throughout the United States.
COMPUTER with MEMORY Speeds Inventory

MAKING molehills out of mountains of paper work, "Bizmac" will do in minutes inventory control procedures that formerly took months. Its high-speed memory, an electronic "scratchpad," can "remember" stored data indefinitely andâ€”on signal â€”release it in millionths of a second. Developed by Radio Corporation of America over a five-year period for standard business operations, this four-million-dollar electronic data-processing system has just been installed by the U. S. Army at the Ordnance Tank-Automotive Command in Detroit. It was designed to perform electronically most of the voluminous clerical procedures involved in OTAC's world-wide stock control program.