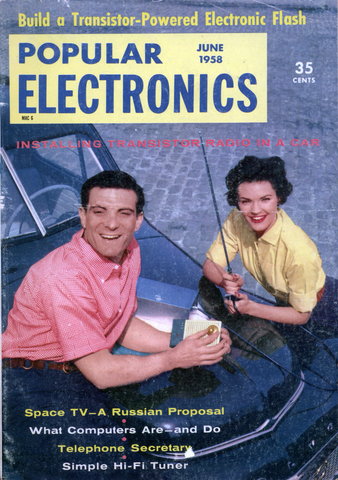 Every time I bought a record. I used to set up the calibrated microphone. connect the oscilloscope. start the music with hated breath, and keep my eyes glued to the screen. If anything on the 'scope pattern looked suspicious (something always did), I would start checking tubes, voltages and crossover frequencies, and examine the record under a microscope.
Is Radio Earthbound?

By D. C. WILKERSON Can Radio Waves conquer interstellar Space and travel from planet to planet? That is the question the scientists hope to answer with Prof. Goddard's proposed Moon Rocket, Which will contain a radio transmitter. HOW IT LOOKED IN 1925 This article was originally published in RADIO NEWS, our sister publication, in March, 1925. It shows that even 33 years ago realistic individuals were thinking ahead on the subject of radio transmission. It is rather amazing that author Willterson predicted the future so well, as evidenced by the fact that we are receiving transmissions from space today. Note the similarity of the rocket conceived by Dr. Goddard back in 1925 (shown on page 52) to a modern rocket, the "Thor" (shown here). —THE EDITORS
ELECTRONIC COMPUTERS - what they are and what they do

AUTOMATION has given new importance to electronic computers. From automatic factories to magazine subscriptions, they are becoming a part of our daily life. More applications are constantly being found for computers large and small. There are two different types of computers: the digital, which uses numbers or digits, and the analog, which uses a measure, such as voltage, current, or angle of rotation. While large-scale digital computers have captured the headlines, both types are important. Many more analog than digital computers are now in use although both analog and digital techniques are used in some computers. There are, however, striking differences between the two types. Each has applications where it is best suited; each has good features as well as disadvantages.
The remarkable transistor observes its 10th birthday

THE RATHER LIMITED conception of radio transmission we had back in 1925, when we wondered whether radio waves could be propagated through space (see opposite page), has progressed to a stage where today we are near the point of transmitting television through space. With the launching of the first Sputnik last October, the dream of global TV received a tremendous shot in the arm and it has gathered momentum with each additional satellite thrown into the skyâ€”both Russian and American. The magazine which first published data on Sputnik I, the Soviet periodical Radio, has outlined a plan which would allow nearly every TV set anywhere on earth to pick up a program transmitted from any other point. Television today, of course, is pretty much limited by line of sight, except in those areas which have coaxial cables, and a few spots which are equipped with over-the-horizon scatter facilities. The system proposed by engineer V. Petrov would make use of satellites which would pick up signals from stations on earth and bounce them to other satellites for more distant relay. "STATIONARY" SATELLITES If a satellite is launched from the equator so that it follows an eastward track at the proper speed and height, it will remain over one spot on the equator. In other words, if it went into orbit over Belem in Brazil, or Stanleyville in the Belgian Congo, or Singapore in Malaya, it would remain fixed in the sky over that spot. This is becauseâ€”if the velocity and height are correctâ€”the speed of the satellite will exactly match the eastward rotation of the earth. It will be making an orbit of the earth once in 24 hours (compared to the 90 to 106 minutes or so for the present satellites. Since the earth rotates on its axis once in 24 hours, there will be no relative motion between the two spheres.
"NO-HANDS" TRAIN

“NO-HANDS” TRAIN You don’t need an engineer on this tractor-train, because the system at Esso’s Baton Rouge refinery is electronically controlled. The train, which pulls five trailers at 2-3/4 miles at hour, follows the electromagnetic field of a wire laid in the floor. Two gates in the building open automatically as the train approaches and […]
Build your own answering machine

Tell your friends that their telephone messages to you will he recorded by electronics By TRACY DIERS HOW WOULD YOU LIKE to have a secretary who will answer your phone and take messages at any hour of the day or night but who will demand no pay and no coffee breaks? Impossible, you say? The miracle of electronics has all but removed the word "impossible" from the dictionary. There are two types of systems you can build which will do this job for you. The deluxe system requires two tape machines or one tape machine and one disc machineâ€” when a call comes in, it plays a recording of instructions and then switches over to record the message. The simpler type, to be described here, requires only one recorder and anyone who can put together a small amplifier can build it.