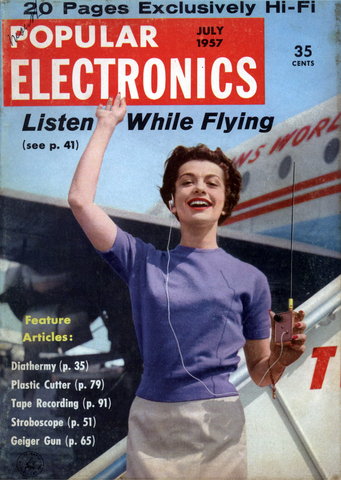 This is one of those weird artifacts of imaging that is still true on computers today. Applying some sorts of a blur to an image can make it actually appear sharper. “Spot Wobble” Unlines TV Picture Vast improvement in TV pictures is predicted by Westinghouse if the “spot wobble” method of horizontal line scanning is […]
BIZMAC at Bat—"Brain" Predicts 1957 Averages

Early in March, when the Army Ordnance Command's BIZMAC computer was demonstrated publicly for the first time, the operators used it to predict batting averages for the 1957 season. Twelve of the leading major league baseball players were "analyzed" by the computer, which based its predictions on the players' averages for the past five years.
Stereophonic Chair

Stereophonic Chair Grandfather’s chair, “ears” and all, has been hauled down from the attic, dusted off, and given a new lease on life by Stereo Products Co., Severna Park, Md. By sticking loudspeakers into each of its side-“ears” and hooking them up to a stereo tape player, this company has come up with a new […]
Pigantics

Pigantics Artificial jet thunder storms the barnyard to test effect of noise on farm animals OUR four-footed friend above is a principal participant in scientists’ experiments to determine whether noisy jet aircraft, roaring over the barnyard all day, has any adverse effect on the milk and meat producing capacities of farm animals. Aircraft sounds are […]
What You Should Know About DIATHERMY

New rigid controls enforced by FCC prevent communication snag EARLY IN 1954, a Chicago housewife innocently became responsible for the murder of a bank guard and the subsequent escape of the criminal with over $10,000 in unmarked Federal bills. Her rented diathermy machine had jammed radio police calls emanating from a local police transmitter, preventing the prowl cars from receiving the robbery tip-off in time. In the same year, the FCC published warnings that illegal diathermy machines had been known to interfere with instrument landing signals, causing the crash of at least one large airliner, and had blocked a nearby radar screen used by airports to prevent midair collisions. Another terrifying story was told of a doctor's ultra-short-wave machine which had thrown a guided missileâ€”the new Army NIKEâ€”off its course and started it homing toward the doctor's office itself. Only at the last moment was the tragedy averted by emergency control from the ground.
Ad: HIGH-PAY CAREERS in... GUIDED MISSILESâ€”AUTOMATION

Outstanding Employment Opportunities Open to Central Graduates! No matter what you're doing now . . . whether you've ever had previous technical experience or not, you can begin right now to prepare for a great career in these fascinating, rewarding fields!
Dig That Crazy Ribbon!

UP IN Greenwich, Conn., the night air was shattered by the 60-db roar of an African lion. Frantic phone calls to police headquarters brought a safari on the run, armed with ropes, nets and high-powered rifles. After carefully surrounding the wooded residential area where the beast had been reported, the police cautiously closed in. But instead of a prowling predator, they bagged â€”of all thingsâ€”a loudspeaker. It seems that there was a party in the neighborhood, and the hostâ€”a tape recording fanâ€”had hidden a strong-muscled speaker in the bushes outside. As the party was slowing down, he played some tapes he had made at the zoo, "just to pep things up!" That's what he told the judgeâ€”which goes to show that, while most uses for tape recorders in science and industry are pretty serious, tape has its zanier moments as well.
Build Your Own Geiger-Gun

EVERYONE, prospector or not, should have a Geiger counter. Many wise householders are assembling survival kits of food, bandages, and water. By adding this handy, inexpensive radiation detector, you can provide your family with a means of detection of contaminated material in the event of atomic warfare. Simple as the counter may be, it will detect radiation as feeble as that given off by a watch dialâ€”or it could make you rich by locating a uranium ore vein.
Divine Strobotron

High Speed Stroboscope Freezes Motion By HARVEY POLLACK WOULD YOU LIKE to examine the contortions of your high-speed circular saw, drill or handsaw under conditions that seem to slow it down to a crawl ? Any repetitive movement, whether rotary or reciprocating, can be viewed as though the moving body were at rest or in very lazy motionâ€”under the flashing illumination of this wide-range "Varistrobe" (variable flash-rate stroboscope).
Large Screen Projection TV

Far Cry from the “Cuckoo” Clock Germany’s Black Forest was once famed for its cuckoo clocks. Bringing its technology up to date, the Saba-Works of the Black Forest has come out with a handsome large-screen projection TV set (left) that can be remotely controlled. An image of high optical density is formed on a small-faced […]