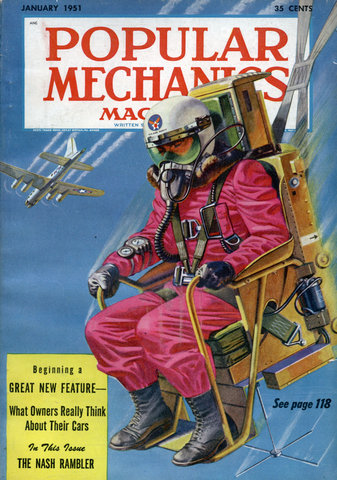 TV AND ELECTRONICS FOR 1951 A—Speed-photo transceiver aids criminal investigators. Similar to wirephoto machines used by newspapers for sending and receiving pictures, it transmits and receives fingerprints, photographs suspected checks and other investigation matter long distances over the air in a few minutes. The instrument transmits and receives the pictorial material at the rate of one cross-section inch per minute
Honestly now - would you prefer a shrinking violet?

The advertisers in this magazine all claim their products are "tops." They are full of pride in their brand names. Every so often you meet someone who objects to what he calls the "boastfulness" of advertising, but most of us Americans like it. We like it because we know that deep pride in things well made goes way back into the factories and is reflected in the fine products we have to choose from when we go to buy the things we use in our homes or on our persons.
Room with Bath - On Wheels

IF YOU SAW Louis Matter's car rolling along the streets of San Diego, Calif., you'd probably consider it just another attractive automobile. But if you looked inside the car you'd find everything from a barbecue pit to an Arabian water-cooled pipe. And if Mattar really wanted to show off his wondrous vehicle he might let you take a shower bath just off the right front fender.
If the A-Bombs Burst

Here is what to expect, what you can do today to prepare yourself, what you can do then to survive By Clifford B. Hicks 8:15 a.m., August 6, 1945. A single plane flies over the city. The only warning is a blinding flash of light. A ball of fire explodes in the sky, hanging there for a moment as it grows in size and fury. Then in a crackling instant the world's second atomic explosion races down to strike the earth at a spot called Hiroshima. Sixty seconds later 70,000 Japanese are dead, caught above ground. The heart of the city has been blasted into rubble which still plummets down on the dead and dying. 10:15 a.m., January 2, 1950. A stenographer in Manhattan shrugs her shoulders over her mid-morning cup of coffee and says to her girl friend, "I'm tellin' you, there's nothing you can do to save yourself â€”just one bomb will wipe out New York. Me, I'm headin' for the country if things get worse." At the same moment the sky above Chicago's Loop is split by a bright flash of lightning from a sudden winter storm. A nervous executive freezes in terror for an instant, then smiles sheepishly as he returns to the morning mail. But he can't help wondering whether the bomb would demolish his home and kill his family in a suburb 14 miles away.
Vanishing Microphone lets the starts shine

Now you see it, now you don't! RCA's new "vanishing microphone" is plainly visible when standing aloneâ€”but let a television performer stand before it and it seems to disappear.
Meet "SUZY"

Wow, anthropomorphizing a buffer…. I’m not sure how I’m supposed to feel… Am I supposed to be attracted to my buffer? Erm, excuse me… Handheld Workshop. Meet “SUZY” -a POWERFUL good friend to have around the house! “SUZY” polishes, drills brushes, mixes paint, saws, buffs, sharpens, sands, scrapes, grinds, routs “SUZY KIT” â€” a complete […]
POLO ON FOUR WHEELS

POLO ON FOUR WHEELS TAKE a generous helping of polo, a little soccer and a dash of pushball, shake them vigorously with stripped-down automobiles and you’ve got Moto Poloâ€”the newest California sports craze. Protected by a heavy steel bumper that completely encircles the car and a sturdy framework of steel piping, each driver tries to […]