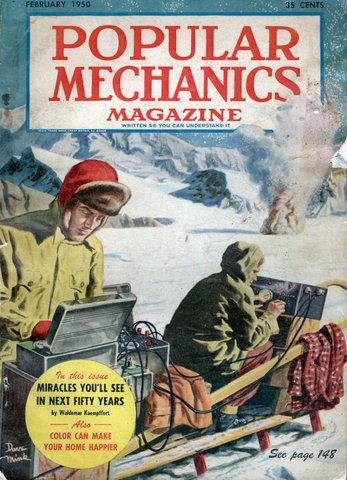 The Mysterious Influence In The Air You Breathe! The SOUL OF THE UNIVERSE is in the air you breathe. Deposited in your blood—with each inhalation you take—is the intelligence that directs the course of the planets through the misty reaches of space, and the strange phenomenon of life itself.
Mechanical Cow

Up in Whitehorse, the largest settlement in the Yukon Territory, children get their milk from a mechanical cow. Actually, the machinery works in reverse — it churns milk stock, pure water and butter back into rich milk. The water is heated to 100 degrees Fahrenheit and the milk stock added. Then the mixture is brought to a boil and butter mixed in at a temperature of 145 degrees.
Partition Gives Submarine Effect

Spectators receive the illusion of looking directly into a group of small, beautiful submarine gardens when they view the collection of rare tropical fish owned by Fred Joerger, Hollywood motion-picture artist. All the glass tanks that hold the fish are concealed behind a partition of shaggy redwood bark and are viewed through irregular ports cut through the bark.
Telescope Walking Stick

Telescope Walking Stick Hikers can spot faraway objects as they tramp with a walking stick which has a built-in telescope. Made in Japan, the telescope can be fitted to any stick to form the handle. It is pivoted across the top of the stick and easily adjusted to see through.
Prune Picker

Wouldn’t all the blood rush to your head? Prune Picker Powered by the operator’s feet, a new machine rolls along the ground to speed the harvesting of prunes and other ground crops. A platform supports the operator in a prone position above his work. He flips the prunes off the ground into a hopper. A […]
Reducing Suits

Do they mean that the Jockeys lose that weight? Or the horses? Because I think the only way a jockey is going to loose five pounds in an hour is if you cut their leg off. Reducing Suits Horses, as well as overweight humans, can trim off pounds by sunning in a plastic “silhouette” suit. […]
Hands Up!

to hold your books Cash in on personalized book ends. Cast in a flexible mold from a master pattern of a human hand and finished in bronze, they bring a handsome spare-time profit By Thomas A. Dickinson LIKE THE BRONZING of baby shoes, here's an idea that can be turned into a profitable spare-time business â€” casting book ends from human hands. But whether it's done for profit or just for fun, it costs little and your friends are sure to be intrigued by a life-size reproduction of their own hands, supporting their favorite books.
The 1950 U.S. Census

By Richard F. Dempewolff For A house-to-house canvass that will make all the brush salesmen in the world look like an army of pikers, wait until you see the one that gets under way April first. Yup, it's time for the 1950 decennial census, Uncle Sam's national inventory of nosesâ€”the biggest quiz show, most mammoth tabulating phenomenon and most accurate poll in history. It's a job that has taxed the ingenuity of a harried Census Bureau every zero year since 1790. At that time 17 U. S. marshals and 600 assistants knocked on colonial doors, asked five questions of whoever answered, then tacked their lists on the walls of local taverns, so that people who'd been skipped could add their names or Xs when they dropped by for a flagon of ale. Results were mailed to the President.
Motorcycle Skis

This looks like something from a James Bond movie. Motorcycle Skis Motorcyclists now have a new sportâ€” “ski cycling” over ice and snow. A broad, short ski fastens to each side of the motorcycle frame. It is held at the correct level by springs which absorb the shock as the ski runs over the snow […]
BONE DETECTIVE

By Alfred Eris AN EGYPTIAN!" The FBI agent drew back, startled. "But, Doctor Stewart," he protested, "This hand was found in Oklahoma!" He waited for the slim, bespectacled Smithsonian scientist to switch his diagnosis. Doctor Stewart just looked at him, quietly. "I know. Still, it's Egyptian!" The Federal man stared hard at the shriveled hand partially wrapped in moldy fabric, then sighed. "Do you mind if we quote you?" The scientist nodded assent. The result was precisely what the FBI man anticipated. Midwestern newspapers had a field day gibing at the Smithsonian "expert" who confused the hand of an honest Oklahoman with the mitt of an ancient Egyptian. Eventually, the furore and hilarity came to the ears of a rural citizen who promptly claimed the mysterious hand, and silenced the merriment by announcing that it was, without question, Egyptian. Furthermore, there was more than just a hand; there was all of the rest of a mummified Middle-Eastern gentleman brought home by a family globe-trotter. Some playful children or household pets had probably dragged the appendage from an attic into the open, where it was brought to the attention of startled local sleuths, who hurriedly called in the FBI.
Vest-Pocket Ash Tray

Vest-Pocket Ash Tray What can you do with cigarette ashes when there’s no ash tray around? Dr. John H. Findlay, Westinghouse engineer, often was looking for a place to deposit ashes so his colleagues came up with an answerâ€”a vest-pocket ash tray. They made it from part of an electronic tube and fastened on a […]
Five Roads to Doomsday

By Richard F. Dempewolff UNDER a star-studded dome of blue sky, people gazed upward uneasily. Something was wrong with the solar system. The friendly, familiar moon had ceased to be friendly. Slowly, it was moving closer and closer to earth until, finally, an unfamiliar moon, huge and terrible, filled half the sky. There was no beauty in the awesome spectacle. With the moon's advance, ocean tides grew into mountains of water, spilling over continents, obliterating cities. Molten matter from deep under the earth's crust, spewed from every crater and crevasse. Oceans atomized with hissing roars. Cities crumbled and were engulfed in a sea of liquid fire.
YOUR COLOR TYPE and how to live with it

Step right up, folks, and select a color to fit your personality. The correct hue will make you sparkle, says Louis Cheskin, top color expert, who offers tips on redecorating your home. By Clifford B. Hicks IF YOU ARE emotionally normal, your favorite color likely is a particular shade of blue and your wife feels a strong attraction for magenta-red. Your small children â€” given a choice â€” select bright-red toys. If you are a farmer, you prefer a great many colors other than grass green, but if you work in a steel mill, grass green likely is one of your favorites. You may not realize it, but you probably find a strong-blue room depressing, a vivid-yellow room head-splitting, a bright-red room nerve-wracking and a leaf-green room boring.
Miracles You'll See In The Next Fifty Years

By Waldemar Kaempffert Science Editor, The New York Times WHAT WILL the world be like in A.D. 2000? You can read the answer in your home, in the streets, in the trains and cars that carry you to your work, in the bargain basement of every department store. You don't realize what is happening because it is a piecemeal process. The jet-propelled plane is one piece, the latest insect killer is another. Thousands of such pieces are automatically dropping into their places to form the pattern of tomorrow's world. The only obstacles to accurate prophecy are the vested interests, which may retard progress for economic reasons, tradition, conservatism, labor-union policies and legislation. If we confine ourselves to processes and inventions that are now being hatched in the laboratory, we shall not wander too far from reality.
Car "Crashes" Wall 24 Hours a Day

Car “Crashes” Wall 24 Hours a Day Motorists driving on Route 78 near Escondido, Calif., are startled momentarily by the sight of a car “crashing” into a restaurant. A closer look reassures them, however, since the car is really only half a car and the “crash” is painted on. The restaurant is located on a […]
AMAZING-NEW-ELECTRONIC HAND SHOCKER