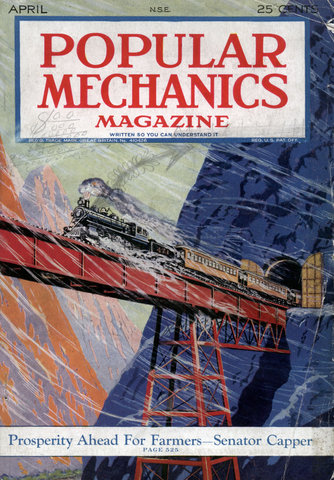 May, 1924
FARMS ARE WATERED BY WIND HARNESSED TO PUMPS

Windmills, resembling those common to Holland, have been found practical for irrigation and power purposes in Kansas. Sufficient water may be pumped from a depth of 75 feet to irrigate a farm of 80 acres with one of the mills which operate two pumps simultaneously.
Huge Organ Has Six Thousand Throats

Thirty Thousand Miles of Wire Form Nerves of Instrument for Which Fifteen Electric Motors Supply Power AS you listen to the majestic tones of a great pipe organ mere mechanical things seem far away, but behind that proscenium arch is an electrical and pneumatic system of intriguing complexity.
BE A MAN Not a Manikin!

Look Yourself in the Mirror SUMMER is coming and bathing suits will soon be in styleâ€”a man's figure is exposed to the stares of everyone. What will your friends think of YOURS? Every woman admires a well developed, powerful body, "Skinnies" and "fatties" will be out of luck. But cheer up; YOU needn't be one of those they scorn and poke fun at! Through my instructions you can take off or put on weight wherever you desire. Muscles that are powerfulâ€”yet beautiful and symmetricalâ€” will make you the ADMIRED instead of pitted. By July you can be a PERFECT MANâ€”strong, healthy, athleticâ€”with a development the whole world will envy.
Time and Money-Saving Tools For Woman's Workshop in Home

Tester Which Quickly Tells Whether Egg Is Good or Bad by Light Shining through Shell on Mirror that Can Be Seen through Hole in Base Turning Any Vase into an Attractive, Portable, Electric Light Is Possible with an Adapter that Carries the Socket for the Lamp on a Patented Grip inside of the Neck Filter and Mixer that Regulates Temperature of Water and May Be Used to Clean Bottles (Left) or Wash Dishes (Right), and Is Attached to Faucets with Rubber Elbows All the Thrills of a Toboggan and Swing Are Combined in This "Whizzer" Designed to Keep Children at Play in Their Own Yard
Mystery Ray Is Revealed By Photos

By WILLIAM D. HARKINS University of Chicago RAYS of a new type, called zeta rays, were discovered recently by Dr. R. W. Ryan and the writer. These rays have attracted much attention, presumably because they were first found by photographing them, or, more strictly speaking, by photographing the tracks they produce when they shoot through air. They are not light rays, but are electrons, or charges of negative electricity, thrown out by an atom. All owners of radio outfits are familiar with the use of electrons shot out from a hot wire, since it is the stream of these particles of matter which is made to do various "stunts" in the different types of vacuum tubes. Such a stream of electrons is also shot out from the hot wire in every electric lamp, and may be collected on a metal plate if it is inserted inside the bulb.
BEARD IS REMOVED WITH MUD AND USE OF X-RAYS (Apr, 1924)

So basically this is just a facial waxing followed by lots of x-rays. Actually, I’ll bet this works. Most people who have been exposed to large doses of radiation do not have to worry about shaving, or combing their hair, or brushing their teeth. BEARD IS REMOVED WITH MUD AND USE OF X-RAYS Shaving beards […]
Birth of Music Visualization

Soundless Symphonies from Keys of "Organ" Projected on Screen Are Hailed as Birth of a New Art THE audience sat in hushed and wondering expectancy within the darkened theater. Without accompaniment of sound, soft color suddenly glowed upon the screen. Slowly it moved into definite form, its modulation of figures evolving in majestic sweeps. Its hue deepened and then melted radiantly into iridescent crimson, and from the restless, ever-changing shapes a slow rhythm was born. It grew and blossomed, a symphony of light, plastic and mobile. The "clavilux," as Thomas Wilfred, the inventor, has named the organ, opens the door to a new art, the expression of moving color and form, which the artist-craftsman believes is destined to take a place as a sister of music and sculpture. It has long been the vision of dreamers; Mr. Wilfred has actualized the dream and provided the instrument that visualizes it.
Very Early Zipper

GALOSHES FASTENED WITH KEY THAT LOCKS ROWS OF TEETH Galoshes are being made to fasten with two rows of metal teeth that lock together as a “key” is pulled across them. It is claimed that this method permits the overshoe to be adjusted in a few seconds and leaves a smooth surface with no buttons […]
Turning Out Photographs by the Million

Great Plants in All Parts of the Country Are Developed to Supply Quick Service and Assistance for Army of Amateurs DEVOTED exclusively to developing films and printing pictures for an army of amateur camera enthusiasts, great plants have been built up in all parts of the country. During the "busy" months of June, July, August and September, when the weather is best suited to taking pictures, the seven largest finishing plants in Chicago handle more than 114,000 pictures daily. Several have an output of 8,000 to 12,000 every twenty-four hours, and many print more than 5,000,000 as an annual average. In Cincinnati, a single company serves almost a hundred drug stores, employing a fleet of automobiles to collect the film and deliver the pictures to the proprietors who have found that the "side line" in film service is a profitable advertisement and brings in potential customers. In one week, one of the collectors for this company brought in 20,000 spools of film and as many as 17,500 prints have been distributed in a single day.
CRUCIFIX IN THROAT TEN DAYS REMOVED WITHOUT KNIFE

CRUCIFIX IN THROAT TEN DAYS REMOVED WITHOUT KNIFE After lying for ten days, imbedded in the throat of a patient in a Boston hospital, a crucifix, two inches long, was extracted without surgery. X-rays located the obstruction and, although the victim was at the point of strangulation, no knife was used, despite the fact that […]
MAKING A SMALL ELECTRIC AUTOMOBILE

By E.B. Stack. THE electric automobile described in this article is not merely a toy, but a real electric car. It was designed and made for children, but will carry a load of four hundred pounds with ease. Every part, while made as light as possible, is strong enough to stand any amount of rough usage. It is ideal for the youngster who is past the coaster-wagon stage, but not yet old enough to be allowed to run the "flivver."
Engineering the Magic Carpet's Flight

Problems in Mechanics that Make the "Movie" Engineer's Profession Recall the Magician's Miracles BUILD me a magic carpet on which I can ride; a flying horse like Pegasus and arrange a set so that I can disappear in a whirlwind." The "boss" of the moving-picture lot, without more ado, walked out of his chief engineer's office, leaving that hard-working individual the three problems which he mentally added to the score or more of similar commands he had executed since the actual "shooting" of the scenes in the huge spectacle had begun months ago. For the engineering staff of the larger moving-picture producers is used to facing and conquering problems that for sheer unusual-ness are perhaps unrivaled.
"Limousine" Sled for Small Children

“Limousine” Sled for Small Children Small children greatly appreciate the “limousine” sled shown in the photo, as it gives them the thrill of riding in their own sled, yet keeps them much warmer than an open one. The frame is made of smooth 1 by 2-in. wood, securely attached to the sled. The lower part […]