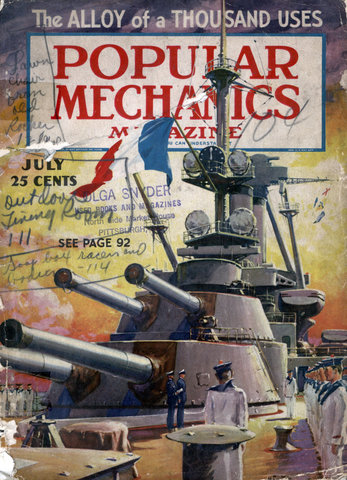 Machine guns that can flood a wide area with tear gas or nauseating gas in a few seconds are the latest recruits to law-enforcement staffs. Forty or fifty feet from the muzzle, the stream of powder has become a cloud of blinding or sickening gas, and the rapid-fire gun can distribute this along a broad front, effectively putting down a riot. The powder shell follows a formula developed by a former army officer.
MODERN WONDERS of an Ancient Art Part II

By H. W. MAGEE Part II IMAGINE a metal house coated with glass, a home with all the delicate coloring and enduring beauty, inside and out, of age-old cloisonne. The development of porcelain enameled iron for architectural purposes makes such a home both possible and practical. As a building material, porcelain enameled iron—actually a form of glass fused on to a metal base—offers an admirable union of utility and beauty for it possesses the strength of metal plus the hardness and permanence of glass. It can be produced in any hue or combination of hues in the mineral spectrum, it is colorfast, impervious to weather, non-porous, rustproof and can be made acid-resisting. And it is good for a lifetime of service.
Latest FEATS of the PLANT BREEDERS

TWENTY-FIVE per cent of the vegetables and annual fruits we eat were unknown ten years ago, says an agricultural authority. Of course, he adds, common vegetables like peas and potatoes still look the same but we are now using improved strains that didn't exist a decade past. Scientific plant breeding is continually creating new varieties of commercial plants that are larger, better flavored, more resistant to disease, or more desirable in other ways. Few who buy ordinary cantaloupes in season, for example, know that the melons they get today are a brand new strain. Ten years ago cantaloupes were afflicted periodically by a mildew that caused the meat to resemble that of a leathery cucumber. Then a plant scientist discovered a relative of the melon family in India that was practically useless except for a strong resistance to mildew. As a result of a long breeding program this quality was joined with all the desirable features of the old cantaloupe in a new strain of fruit.
Automatic Dialing Makes Phone Calls Easy

Automatic Dialing Makes Phone Calls Easy Operation of the dial telephone is made easier by an automatic unit introduced in London. The numbers which the subscriber calls most frequently are printed on a list on top of the device. These numbers are conveyed by notches on a disk inside the machine to the automatic dialing […]
Dynamite Made from Corn

Better not let the TSA see this or they’ll ban corn from all flights. Dynamite Made from Corn Production of a highly explosive dynamite from corn is one of the latest developments of the chemical laboratory. It is the result of the recent discovery at the University of Iowa of an inexpensive method of extracting […]
Robot Cashier Takes Money and Gives Photo as Receipt

Robot Cashier Takes Money and Gives Photo as Receipt When you pay your bills to the “Incassomat,” an automatic cashier, out comes a receipt bearing a photograph showing what you have depositedâ€”be it coin or currency, note or other document. This robot cashier with the photographic brain is being tested in England for possible installation […]
The First Machine Age

MAN'S mastery of mechanics which brought about the machine age of today dates back thousands of years to the first machine age when primitive men discovered and applied the two basic principles of mechanicsâ€”the lever and the inclined planeâ€”and then invented and used the six elemental machines: the lever and the inclined plane, the wheel, the pulley and the axleâ€”all modified forms of the leverâ€”and the screw, an adaptation of the inclined plane. Today, in the Seymour H. Knox Hall of Civilization at the Buffalo Museum of Science a unique exhibit titled "Mechanical Power" pays proper tribute to the ingenuity and inventiveness of the ancients. Miniature figures are portrayed using models of the rough, crude, but highly important machines of the first machine age. As the sub-title of the exhibit explains it: "The discovery and application of simple mechanical principles made possible tasks to which muscles alone were unequal." Thus even primitive man proved the superior power of brain over brawn and paved the way for the machine age of today.
BOYS HAVE FUN! MAKE THINGS THAT GO

This is it Fellows! Here's what you want! You know it's the fellow who can do thingsâ€”make things that "work" and "GO"â€”that's the kingpin in every school and neighborhood. Get the "Boy Mechanic" and enjoy that popularity yourself. These famous books give thousands of plans, kinks, and articles on everything the average boy wants to do and make for himself. 4 Big Books â€”7x10-1/2 Inches
Queer Facts about Star Gazers

HAVE you ever seen a picture of a square star? Why do astronomers live longer every year than anyone else? Would you believe it is impossible to look through the world's largest telescope? Do you know astronomers don't always point their telescopes at the stars they really want to observe? There are no square stars, of course, although the scientists make photographs that show them as squares. They do it with a special camera equipped with a traveling back that moves up and down so the rays from separate stars are recorded as square patches on the film. This makes it easier to measure their comparative brilliance.
Snap out of it! The depression's over

Whoops! Not quite. In the year following the publication of this ad the unemployment rate in the U.S. went from 14.3% to 19%. Snap out of it! The depression’s over The question is, are you over the depression? Tough? You bet it was â€” it was the toughest depression this country ever had. But listen: […]
Fingerprint "Lifted" on Film without Using a Camera

Fingerprint “Lifted” on Film without Using a Camera Two steps in the process of fingerprintingâ€”the photographing of the original finger marks and development of the filmâ€”are eliminated by a simple method now being used. In this system the negative is not made photographically. The finger marks are powdered, then “lifted” on a jellylike transparent film. […]
The Amazing Story of Stainless Steel

RUST which, it is estimated, causes a loss of about one billion dollars a year in this age of steel, today is in full retreat before an advance that began about a generation ago. Strangely enough, the big guns of war played a key part in the early stages of the battle. The history of man's attempt to conquer rust goes back almost to the time when the first iron tool was fashioned. The most important chapters, however, have been written since the beginning of the present century.
DANCE YOUR WAY TO POPULARITY

DANCE YOUR WAY TO POPULARITY $1.98 A whole family can learn to dance this guaranteed way If you’ve never danced before, you’ll soon become a good dancer with this new, amazing picture course! Every member of your family will love itâ€”it’s easy, you learn quickly, have fun doing the steps. Learn Fox Trot, Waltz, how […]
Bicycle Has Steering Wheel and Chairlike Seat

Bicycle Has Steering Wheel and Chairlike Seat Equipped with a chairlike seat, a bicycle introduced recently in Paris permits the rider to sit up straight in a comfortable position while pedaling. The bike has a steering wheel to insure better control.
DIVORCE EYE CRUTCHES!

GENTLEMEN, MEET THE PRINCE OF PIPE TOBACCOS-PRINCE ALBERT Introduce yourself to Prince Albert at our risk. As a tobacco fancier, notice how P. A.'s "crimp cut" makes for a cooler smoke. Enjoy steady pipe-smoking that doesn't bite the tongue. See how evenly Prince Albert cakes in yourpipe. How mellow, fragrant, and comforting it is! Below is our man-to-man offer. P. A.'s grand "makin's" too.
Japanese Rollerblades in 1938

Skates for Rough Surfaces Are Built Like Army Tank Constructed with several sets of wheels along the lines of an army tank, skates introduced recently in Japan may be used on unusually rough surfaces. The multiple wheel skate tends to level out the rough spots. Braces attached to the leg help to hold the skates […]